An equally overwhelming consensus in the bond market thinks the Fed may get the bird airborne, but not for long. Nor for good reason. After a peculiarly strong employment report last week, long-term rates rose about a quarter-percent, but by this week’s end are trickling back down a bit.

There is not the slightest trading anticipating a long Fed flight upward, not even a gradual one.

Let’s explore an alternate universe, a counter-factual. The Fed’s leadership, Janet Yellen, vice-chair Stanley Fischer, New York Fed’s William Dudley, joined by hawks at regional Feds, all are united in orthodoxy: If the unemployment rate falls too low, wages will rise too fast and inflation will result.

Fed-speak has forever included a crucial code word to describe the economy’s speed limit, “capacity,” so citizens at large will not understand the Fed intends to throw them out of work. With the best intentions, of course, preemptively and for their own good.

Dudley, in plaintive echo: “Energy prices will not go down forever and, as the dollar stabilizes, import prices will likely stop falling.”

OK, agreed on numbers one and three, but if you guys embark on a death march, the dollar will not stabilize, it will rise. And even if all three stabilize, what is the source of insuppressible inflation?

If the Fed embarks on a death march, the dollar will not stabilize, it will rise.

Dudley went on to second-guess his own rigidity, acknowledging that markets fairly shout their inflation doubt via exceptionally low real rates of interest.

Charles Evans this week (Chicago Fed Prez) published a chart of the market/Fed disconnect, and in blunt tones doubted the U.S. would reach the 2 percent inflation target any time soon. He went one step deeper, into an issue more and more in doubt: Is that 2 percent target a floor, or a ceiling?

If markets assume the Fed will begin to whack them and the economy whenever inflation reaches 2 percent, it’s a ceiling. Orthodoxy holds that monetary policy requires eighteen months to take effect, so pre-emption is the game, but be careful what you wish for.

Meanwhile, central banks outside the U.S. have been trying desperately to raise inflation to 2 percent. And failing. Mario Draghi this week: “Signs of a sustained turnaround in core inflation have somewhat weakened.” Translating his oleaginous euphemism: inflation is going down. German 10-year bonds pay 0.564 percent (versus our 2.27 percent), and its 2-year trades minus-0.361 percent. Below zero, negative rate.

Japan has been printing yen to raise its inflation for 25 years. Its 10-year is 0.305 percent, and 2s are minus-0.004 percent. Japanese government revenue covers half its spending. This year the Bank of Japan will print yen to buy all the resulting debt plus an amount equal to half of the other half. Inflation and economy sliding.

China’s October exports year-over-year fell 6.9 percent, correctly lamented as a sign of a weakening economy there. However, the bigger story is the damage to the outside world done by falling imports bought by China, at three times the pace that exports are falling (18.8 percent year over year in October). In the purest predation, China’s export surplus widened in October to $61.6 billion. In one month.

Liftoff from zero? Fine. Try to slow the U.S. economy to prevent imaginary inflation, the entire outside world in trouble? We are free of many of the structural woes afflicting the others, but we are not on another planet.

There is a lot of resilience here, but deflation forces are global. The Fed insists that the external weakness and effect are transitory. It’s been a couple of decades so far. Alternate universe? 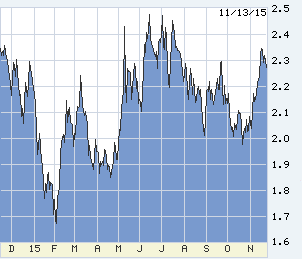 10-year T-note in the last year. Last week’s big move could not even test the spring-summer highs at 2.40 percent. 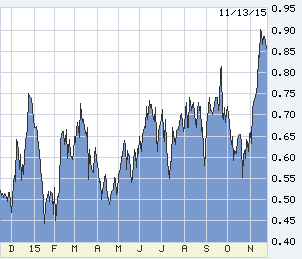 The Fed-predicting 2-year has December in the cake and is looking for another hike in February. The yield curve is flattening rapidly.

Some at the Fed understand the warning (flattening is the common precursor of slowdown and recession), but the leadership sees it as reason to tighten faster — on the theory that external forces are pushing down long-term rates but not inflation. Bad theory. 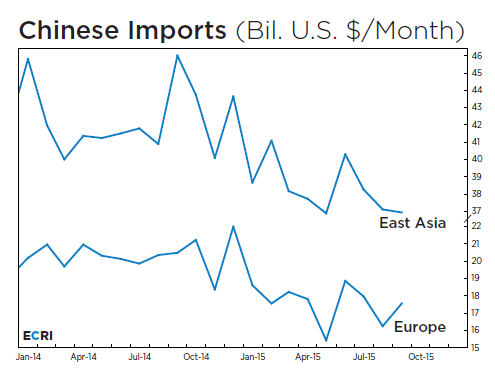 We don’t export a lot to China or anywhere, but the weakness elsewhere spreading from China is arriving here, and I find no reason to believe a transient effect. 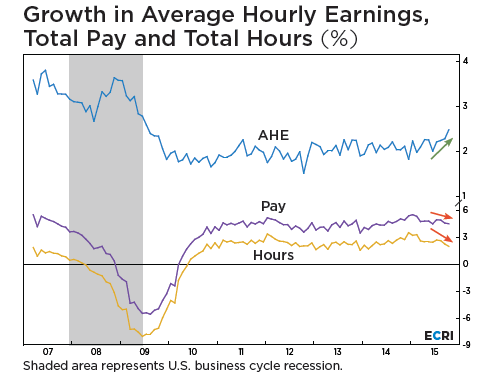 Another from the Economic Cycle Research Institute, which still has confidence in U.S. resilience but points out the hole in last week’s employment data, which included a nice rise in average hourly earnings. The average was up, but aggregate pay and hours have been declining for a year. 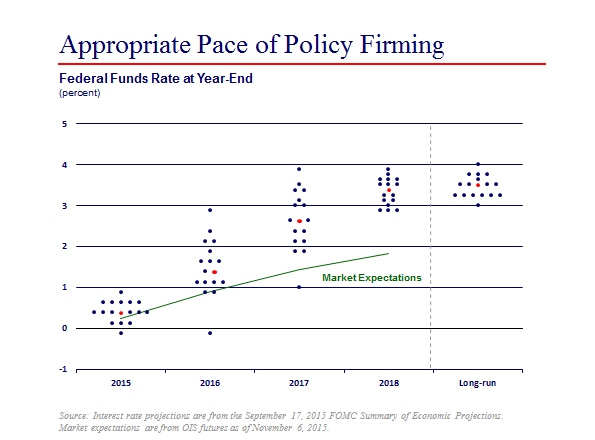 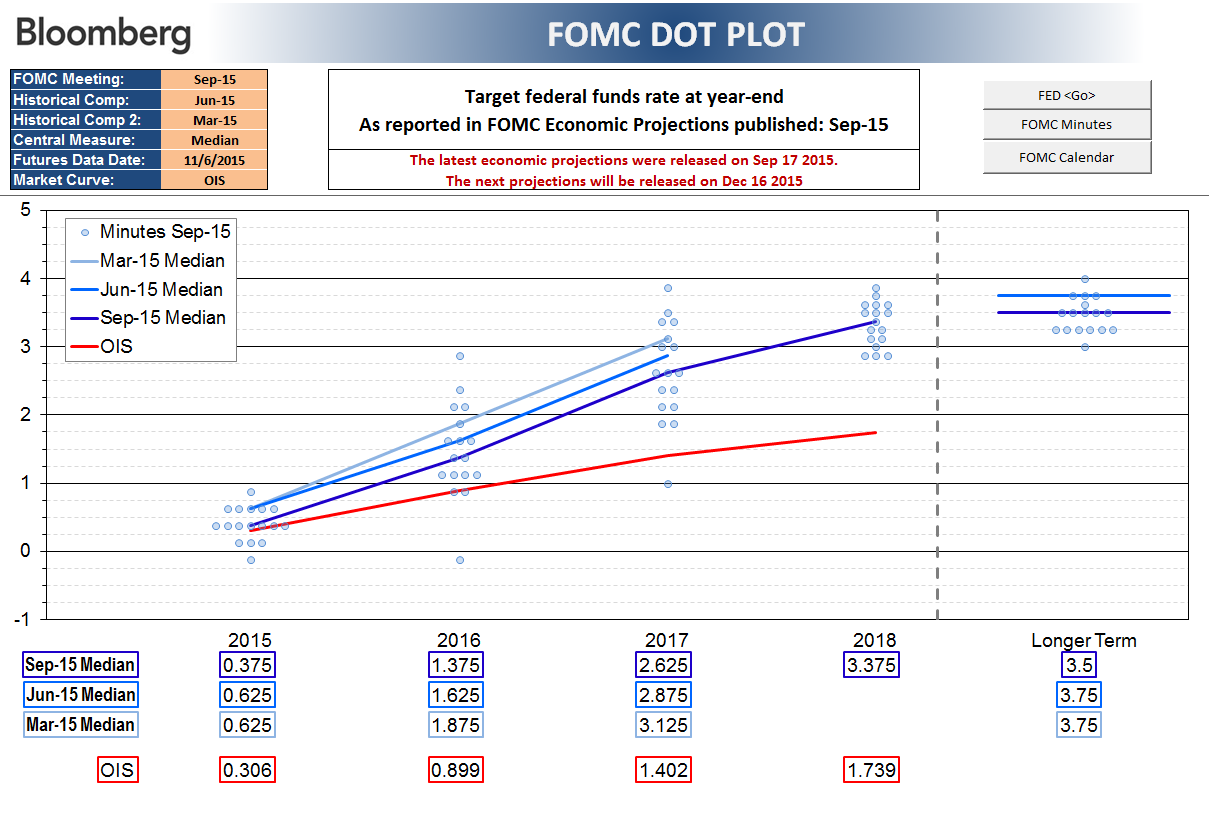 Two charts of same phenomenon (the equivalent of shouting at readers). The top one published by Chicago Fed’s Evans. The red dots are the centerline of the Fed governors’ and regional presidents’ forecast of the future Fed funds rate. Markets expect less than half the Fed’s future slope.

Same deal below, but showing the progressive decline in the Fed’s quarterly forecasts of its own future action. It is impolite of me, but the picture shows a mistaken and stubborn Fed very slow to get the reality message. The risk of policy error is heavily tilted to overdoing the tightening.

The leadership may be getting the message, but so slowly that its cries of “Wolf!” make it look silly. The red line, “OIS” is the overnight interest-rate swap market, a real market indicator (as opposed to the Fed-funds futures market, just wagering which is wrong more often than right).

Outside the Fed, anxiety-ridden birds have begun to pluck out their own feathers
Back to top
Be part of the community driving real estate forward. Join thousands of top-producers at Inman Connect Las Vegas this August.Learn more×
Limited Time Offer: Get 1 year of Inman Select for $199SUBSCRIBE×
Inmanpot
Log in
If you created your account with Google or Facebook
Don't have an account?
Create an Account
Forgot your password?
No Problem