Here before Thanksgiving, I’m more pensive than my usual argumentative self, backing away from the immediate toward historical distance, savoring surprise and tilted to forgiving human absurdity than railing against it. The dominant news, of course: Paris. Which has had no effect on financial markets.

Here before Thanksgiving, I’m more pensive than my usual argumentative self, backing away from the immediate toward historical distance, savoring surprise and tilted to forgiving human absurdity than railing against it.

The dominant news, of course: Paris. Which has had no effect on financial markets. Tourism will suffer for a while there, but there’s no other economic damage, and even the knee-jerk in the oil market has lost its reflex. The oilies seem at last to understand that Middle Eastern producers need to sell their oil — and will, come what may.

I do hope at least one NFL team will find the wit to play a pre-game “Marseillaise.” There but for the grace of God go a lot of us. Today, Mali.

From the serious to…oh, my. The Fed sent more signals this week that liftoff will happen in December, in particular, the release of the minutes of its October meeting. For those brave or foolish enough to read these, a hint: Read only the short parts prepared by the Fed’s staff, the brains of the outfit.

Read only the short parts prepared by the Fed’s staff, the brains of the outfit.

This set of minutes begins with a technical discussion of the “equilibrium real interest rate,” that short-term rate at which the economy could operate at full employment without inflation, in the Fed’s shorthand, r*. The summary acknowledges that r* fell “quite likely to negative levels” 2008-2009 (hence quantitative easing as substitute for the impossible), is still close to zero, and over the last many years r* has fallen “below levels that were normal during previous business cycle expansions.”

That expression of understanding is most reassuring. The leadership is acutely aware that this time, it’s different, even if limited to U.S. economics, which it’s not. The Fed dropped from its post-meeting statement its concern for trouble ex-U.S. affecting the U.S., but that concern is plain in the meeting minutes.

Surprise: Despite more liftoff warning, long-term rates stabilized this week, even declining slightly. The linkage is overseas. Japan’s economy entered a new recession, GDP (gross domestic product) declining in the last two quarters, and the BOJ (Bank of Japan) indicated that it’s done with additional stimulus. A nation with declining workforce and population is condemned to perpetual recession. One-child China faces similar pressure, as does Europe.

Today, European Central Bank president Mario Draghi: “We will do what we must to raise inflation as quickly as possible.”

The German two-year note fell to an all-time low, minus-0.389 percent, and its 10-year note to 0.482 percent — positive, but down from 1.00 percent in June — and the euro below 107. Finland, the euro-zone poster child for discipline and productivity, is now in depression and can’t get out because it can’t devalue the euro.

The Fed is coming, but mortgage rates are intact because nobody believes the Fed will be aggressive (except its bird-brained hawks), and U.S. yields and safety are attractive to outsiders. This is likely a durable condition, and possibly explosively so, the Fed tightening while the rest of the world continues emergency easing an experiment not previously undertaken.

Giving thanks…first, to be here, two big oceans between here and over there. Thanks especially to the political engineers who constructed our government with more checks and balances than action. We’ve had 230 years’ experience with operating with so little federal government that we hardly miss it when it’s missing…these last fifteen years.

I am old enough to remember first-hand the 1964 Republican ultimate death dance with its base, and I imagine during debates Barry Goldwater’s reaction to today’s talent level. Then consider Mrs. Clinton’s wonderment. Just keep a low profile for another eleven months and walk in?

Maybe, just maybe, afterwards we’ll get at the two game-changers: bust up the health care and higher-ed mafias. The Corleones never had it so good. So, an end to deductibles so high that assisted-premium coverage is a cruel joke. Preening and predatory universities forced to cut back their triple-inflation bloat.

Shoot, life and the economy might be so good the Fed would have to tighten faster. 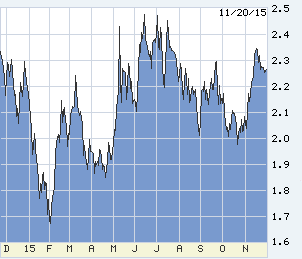 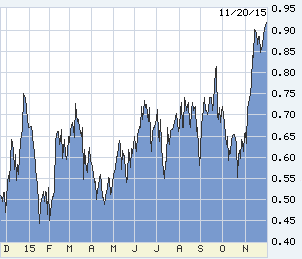 Two-year T-note, adjusting to liftoff and the next hike, but unimpressed by Fed threats beyond. 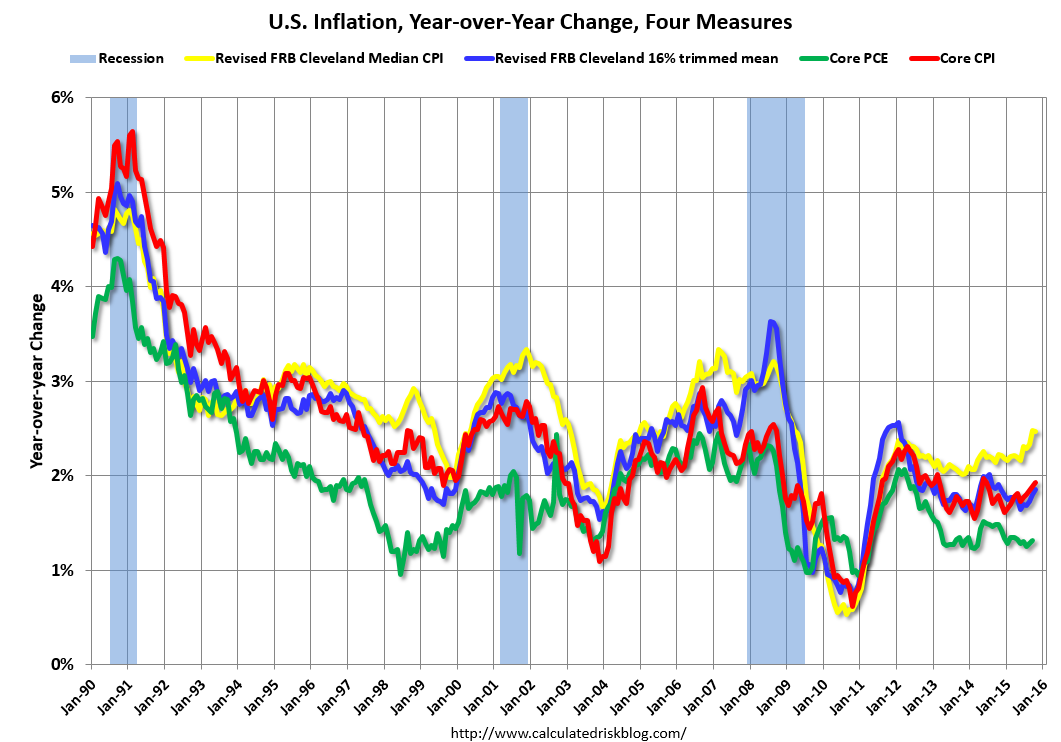 Great chart from calculatedriskblog.com. Some CPI gain, but PCE (personal consumption expenditures — green line) very much under control. Note that our inflation measures include housing, and Europe’s do not; and punishing increases in rent here are a cost shock, not inflation pulled by rising wages. 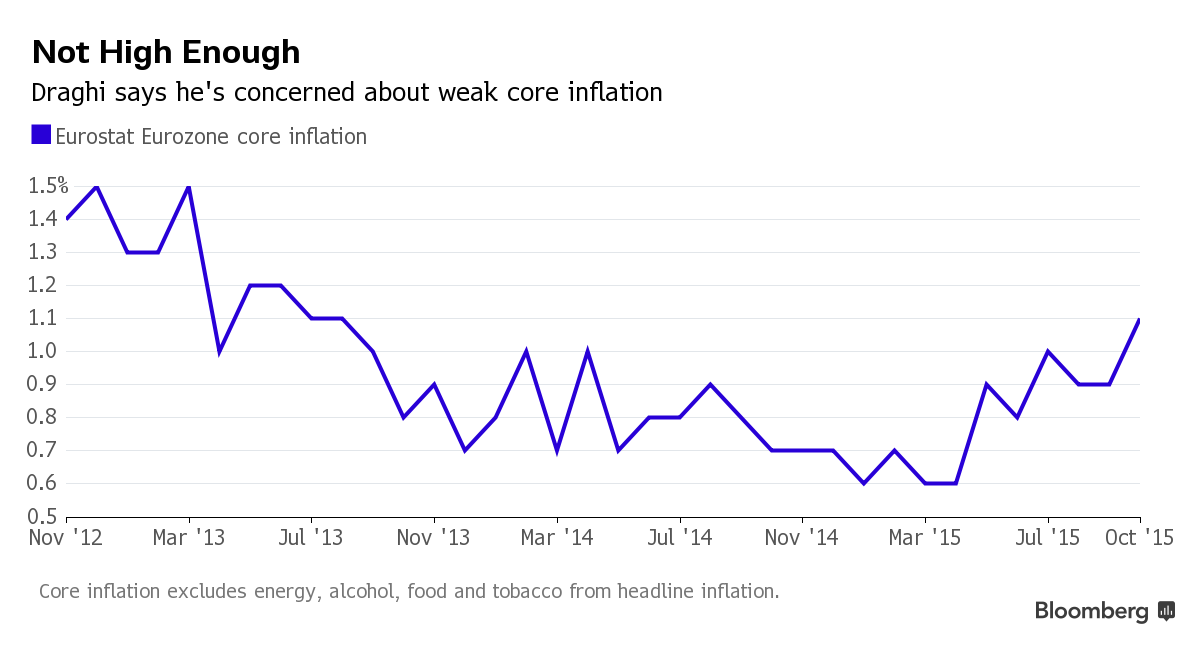 Even the recent rise is in doubt. 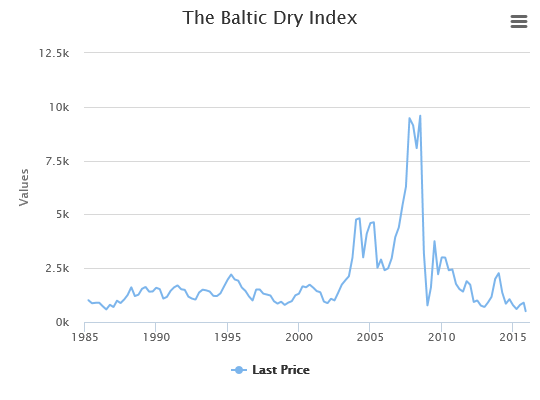 Finland versus Sweden, next door and not nearly as diligent, but with its own currency and devaluation doing its magic.

The Baltic Dry is more an index of commodity shipping than general global trade, but it’s also a chart of China’s stimulus, which pulled it through the Great Recession, in turn stimulating excess capacity and debt among emerging nations. The drop this month is to a record low.

Outside the Fed, anxiety-ridden birds have begun to pluck out their own feathers

Fed liftoff expected in Dec. -- good thing we've had plenty of runway
Back to top
Did you miss Connect Now yesterday? Register now and get instant access to all the replays! Register Now ×
Limited Time Offer: Get 1 year of Inman Select for $199SUBSCRIBE×
Inmanpot
Log in
If you created your account with Google or Facebook
Don't have an account?
Create an Account
Forgot your password?
No Problem