The increasing costs of higher education have caused a lot of concern about student debt. How easy is it to afford a home when your degrees cost considerably more than they used to, and the framed piece of paper reciting your accomplishments is no guarantee of a job?

The increasing costs of higher education have caused a lot of concern about student debt. How easy is it to afford a home when your degrees cost considerably more than they used to, and the framed piece of paper reciting your accomplishments is no guarantee of a job?

However, there’s been little agreement about whether student debt actually does delay homeownership — and to what extent.

New research indicates that a majority of non-homeowners believe that their student debt is a financial obstacle in the road toward buying a home.

A majority of non-homeowners believe that student debt is hindering their ability to buy.

A survey conducted in April 2016 by the National Association of Realtors and SALT, a consumer literacy program provided by nonprofit American Student Assistance, revealed that 71 percent of non-homeowners believe their student debt is hindering their ability to purchase a home. A little over half of all borrowers anticipate a lag in buying that lasts more than five years.

Moreover, 42 percent of grads reported postponing moving out of a family member’s residence due to student debt after college, with nearly half (46 percent) of millennials polled currently living with family.

“Realtors work closely with our clients and consumers every day; we understand the severity of the problem,” said NAR Vice President Sherri Meadows, in a press release. “This is not an abstract issue for us.” 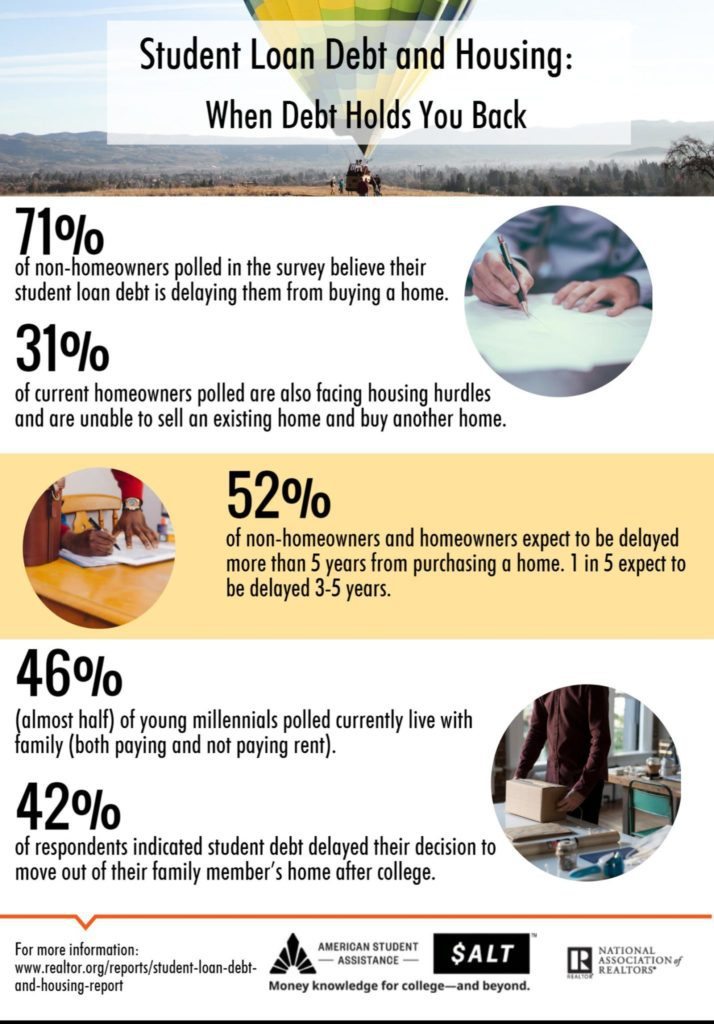 At the intersection of age, debt and homeownership

The survey reflects a total of 3,230 student loan borrowers (making their payments on time) across generations broken down by level of debt and age:

The slice of non-homeowners who are deterred by student debt is largest among older millennials (79 percent). The real world job search for this generation took place either before or immediately after the Great Recession, so it isn’t surprising that older millennials reported facing the longest road to homeownership. More than a third of this group said it took them over two years to leave their parents’ house.

“Nearly three-quarters of older millennials, many of whom graduated at the peak or immediately after the downturn, said their ability to purchase a home is affected by student debt,” said NAR Chief Economist Lawrence Yun in the survey findings press release.

“Add in the detrimental effects of low inventory as well as rents and home price growth outpacing wages, and it’s mainly why the share of first-time buyers remains at its lowest point in nearly three decades.”

The slice of non-homeowners deterred by student debt is largest among older millennials.

One thing is consistent from younger millennials to older baby boomers, however: more than half of non-homeowners across demographics cited student loans as a reason to hit pause on buying.

This debt overhead carries a different financial burden for varying post-grad situations. Saving for down payments is the largest obstacle for millennials (80 percent), who would perhaps like to set aside some money each month but instead are writing loan payment checks.

In addition, nearly 70 percent of non-homeowners with student debt don’t feel there’s enough room in their budget to buy (citing financial security), while 63 percent fail to qualify for a mortgage because of high debt-to-income ratios.

“A majority of non-homeowners in the survey earning over $50,000 a year — which is above the median U.S. qualifying income needed to buy a single-family home — reported that student debt is hurting their ability to save for a down payment,” Yun added.

“Along with rent, a car payment and other large monthly expenses that can squeeze a household’s budget, paying a few hundred dollars every month on a student loan equates to thousands of dollars over several years that could otherwise go towards saving for a home purchase.”

Ripple effects on the housing market

By now, you’re familiar with the tight housing inventory driving high competition among buyers in 2016. The segment of homeowners who would like to sell but don’t due to student debt (31 percent) are also affecting overall supply levels, the survey report noted.

Of these individuals, 18 percent think it’s too costly to move and upgrade to a new home, while 7 percent have debt-related problems with their credit. Another 6 percent are actually underwater, unable to spend more than the minimum mortgage payment.

31 percent of homeowners would like to sell but don’t because of student debt.

SALT President John Zurick encourages the nation to address the student debt burden with better-informed consumers who should be aware of all available resources at their disposal.

“It is imperative to the nation’s economy that we find immediate and practical solutions to financially empower the 43 million Americans with student debt,” Zurick said in a press release. “SALT is committed to demystifying the college financing process by giving consumers information, instruction and individualized advice.

“No one should fail to realize the full potential of their formal education simply because of finances. We invite the higher education community, the U.S. government, the private sector and others to join with us in this movement.” 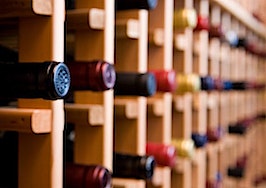 4 millennial buyer must-haves and why they want them