We all see now the shortage of new construction in good markets. Every observer says that sales are suppressed by nothing to sell. Theories abound: development fees, open space reservations, regulation — and there’s always the cost of land, labor and materials. Consider another: geometry.

We all see now the shortage of new construction in good markets. Every observer says that sales are suppressed by nothing to sell.

Why is there so little new construction? Because geometry.

Please don’t run away! I’ll do the math.

What’s sprawl got to do with it?

Metro areas all over the country have expanded in the 70 years since the big war, and the U.S. population more than doubled.

We are city folk — I’m not, but a good three-quarters of the population gravitates to cities, at least for opportunity, if not traffic jams.

Cities have not just grown in population, but expanded outward.

Willie Sutton was asked why he robbed so many banks, and he replied, “Because that’s where the money is.”

Ask a developer why cities expand outward? Because that’s where the land is.

The math of expansion

The math of expansion drove at least half of the country from classrooms in the sixth grade in a panic, which typically happened after the first mention of “pi-r-squared.” (That’s the formula for the area of a circle.)

Let’s grow to six miles across. In the miracle of square ratios, when you add 50 percent to this diameter, your total area more than doubles to 28 square miles.

We call that “sprawl.” Also, a hell of a lot of houses.

Make it twelve miles across — 113 square miles. We have tripled the radius and added nine times the square miles.

That’s the “square ratio.” And a developer’s dream.

The rest of the puzzle

But some other things have happened, even in a land-rich place like America. Cities thrive on the coasts of seas and sea-sized lakes (Chicago). Not just because of beaches, but shipping — the lowest friction, lowest cost to ship anything. Except electrons, of course.

So we see call centers in South Dakota, which is not exactly the land of opportunity.

A coastal city can expand at only half the pace of an inland one, unless it grows its radius inland twice as fast. See East L.A.

The square ratio still works, but to find new land, developers must move much farther from city core.

River-based cities have it easier (Pittsburgh, St. Louis), but are still limited. Denver’s west side is blocked by the Rocky Mountains.

To see the end-stage, imagine land-infinite cities like Atlanta. Sprawl at last becomes the enemy — when the city becomes too far to drive across, opportunity is limited.

Selling a house to move closer to a job is expensive, and it’s just as troublesome to move from one side of a city as it is to move to another city.

To an increasing degree in the last couple of decades, all hot-economy U.S. cities have entered a “rebound” phase.

Outward expansion has run its course, outrunning diameter and the cost of public or auto transportation — and soon, carbon. Not a matter of preference for housing type, or urban versus suburban, just transportation to jobs.

To build new supply, we must rebound inward, which means no more houses, just apartments and condos, and it means rezoning, to which many existing residents will object. Violently.

See? Pi-r-squared was worth something, after all! 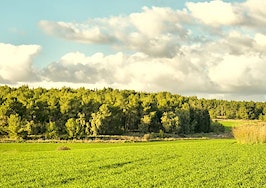