Although prices continue to climb, no other current signs point to a housing bubble in the near future, according to a new report.

Although prices continue to climb, no other current signs point to a housing bubble in the near future, according to a new report.

“Home prices reaching or even passing their pre-crash highs of a decade ago does not signal a bubble in the near future,” David Berson, Nationwide senior vice president and chief economist, said in a statement. “Even with record-high prices in some markets, housing remains relatively affordable, and we are not concerned about a national bubble.”

At least two years before the last housing bubble burst, more than 75 percent of metros indicated signs of trouble, Nationwide says. Today, its data shows more than half of metros remain below their price peaks, and only 7.1 percent of mortgage holders are currently underwater as of the second quarter. Lending is notably tighter than before the recession, the report shows, which is helping lessen default risk.

The Leading Index of Healthy Housing Markets, or LIHMM, is based on variables including employment, demographics, mortgage market and house prices. An LIHMM of 0 is neutral, +4 is highly positive, and -4 represents serious slowdown.

Just 18 MSAs moved down two or more spots. A third of markets dropped by at least one rank. More than half are unchanged from their previous score, and many remain in positive range. 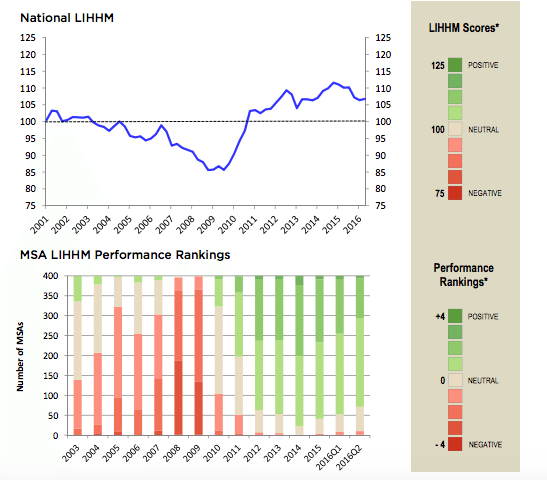 Five of the bottom 10 metro areas – or the least healthy housing markets – are located in Texas, including Dallas-Plano-Irving and Midland.

On average, the Midwest and Northeast regions are the strongest with the best market fundamentals, including low mortgage rates, job market progress and sustainable pricing.

Chicago, Miami, Los Angeles, Washington D.C. and the New York City metro areas shared the same +1 ranking. Chicago and NYC moved down from +2, while the others were unchanged from both the first quarter and year prior.

A quarter of housing markets scored a +2 or better.

Houston, highly affected by the oil industry and energy sector slowdown, received a neutral rating of 0, along with 60 other MSAs approaching unsustainable activity. One year ago, Houston’s rank was +1.