After months of seriously low housing inventory — which has affected affordability throughout the country — it looks like there’s good news for buyers on the horizon.

According to the U.S. Department of Housing and Urban Development, October privately-owned housing permits were at a seasonally adjusted rate of 1,229,000 — a 0.3 percent month-over-month increase from September, and a 4.6 percent year-over-year increase from the October 2015 estimate of 1,175,000. 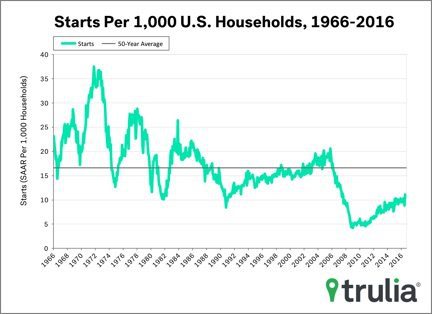 Construction starts were strong in October as well — privately-owned housing starts experienced a 25.5 percent month-over-month and 14.4 percent year-over-year increase to a seasonally adjusted rate of 1,323,000.

National Association of Realtors Chief Economist Lawrence Yun says the report is just the message the housing market needs after a year plagued by low inventory.

“Housing starts soaring past the 1.3 million mark for the first time since 2007 is big and welcoming news. The choke point of the housing market growth potential has been the lack of supply,” Yun said in a statement.

“The consequent tight inventory conditions has been pushing up home values to rise at a faster rate than income growth over the past four years. This in turn has hurt affordability and contributed to the homeownership rate dipping to a 50-year low.

“Now that supply is improving, future price growth should taper a bit. There is no oversupply threat and even more construction is still needed to help relieve housing shortage. Let’s hope the rising construction activity continues,” Yun concluded.

Trulia Chief Economist Ralph McLaughlin echoed the same sentiments in his statement, along with a prediction on how President-elect Donald Trump will impact future growth.

“A big question heading into 2017 is how homebuilders will fare under a Trump administration. While we think some of his broader economic policies might hurt builders, such as immigration and trade policies that could restrict both labor supply and raw materials, we also think he’ll likely implement builder-friendly policies, such as infrastructure stimulus and financial sector reform,” McLaughlin said.

“President-elect Trump could implement a number of policies to help push the number of starts toward their historical average, but there’s a long way to go. Though Mr. Trump as discussed demand-side policies that would ease mortgage lending, such as Dodd-Frank reform, we encourage the President-elect to also focus on supply-side policies given inventory shortages across the country.”

What home builders need that agents can deliver