The proposed 2018 budget released by the Donald Trump administration seeks to provide for “one of the largest increases in defense spending without increasing the debt,” stated in the opening message from President Trump.

The proposed 2018 budget released by the Donald Trump administration seeks to provide for “one of the largest increases in defense spending without increasing the debt,” stated in the opening message from President Trump.

It will also cut 13.2 percent of the overall 2018 budget for the Department of Housing and Urban Development (HUD), according to the 64-page document.

Budget cuts across various government departments will be the source of funding for the planned increase in defense spending, so this budget doesn’t reduce overall government spending but instead shifts money to defense from other areas of the government. 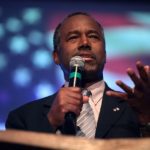 Last week, preliminary budget numbers were released that indicated HUD was facing a $6 billion cut; in an email to staff, HUD Secretary Ben Carson said that “starting numbers are rarely final numbers” — but it appears as though these stuck.

“The budget also promotes fiscal responsibility at HUD by promoting better efficiencies and leveraging IT modernization. I look forward to working with the President and remain keenly focused on HUD’s mission and core values.”

The proposed budget would add $20 million for the mitigation of lead-based paint and other hazards in low-income homes, bringing the total budget for the program to $130 million. It would also provide more than $35 billion for HUD’s rental assistance program and support “homeownership through provision of Federal Housing Administration mortgage insurance programs,” according to the document.

The budget would eliminate:

1. The Community Development Block Grant program, which promotes community development activities that benefit low-income or moderate-income community members, prevent or eliminate slums or blight, or address any community development needs “having a particular urgency because existing conditions pose a serious and immediate threat to the health or welfare of the community for which other funding is not available,” according to HUD.

“The Federal Government has spent over $150 billion on this block grant since its inception in 1974, but the program is not well-targeted to the poorest populations and has not demonstrated results,” stated the proposed budget. “The Budget devolves community and economic development activities to the State and local level, and redirects Federal resources to other activities.”

2. The HOME Investment Partnerships Program, the largest federal block grant to state and local governments that is “designed exclusively to create affordable housing for low-income households,” according to HUD.

3. Choice Neighborhoods, a neighborhood transformation program targeted toward “struggling neighborhoods with distressed public or HUD-assisted housing,” according to HUD.

4. The Self-Help Homeownership Opportunity Program, which grants funds to certain non-profit organizations that “purchase home sites and develop or improve the infrastructure needed to set the stage for sweat equity and volunteer-based homeownership programs for low-income persons and families,” according to HUD.

5. Section 4 Capacity Building for Community Development and Affordable Housing, which allocates program funds to Enterprise Community Partners, Local Initiatives Support Corporation (LISC) and Habitat for Humanity International for enhancing “technical and administrative capabilities,” according to HUD. This could save $35 million from the 2017 annualized budget, according to the proposed budget.

Richard Green, the director and chair of the University of Southern California’s Lusk Center for Real Estate, who spent a year as a senior counselor at HUD under the Obama administration, noted three areas where he thinks the budget “could really affect real estate agents and consumers,” he said.

The first involves the software used to back the Federal Housing Administration’s loan programs; “it has needed modernization for some time,” noted Green. “There’s going to be a point where because it hasn’t been modernized, it’s going to fail. The systems are going to come crashing down.”

And if that happens, FHA loans will be essentially unavailable until a fix is in place. “If FHA lending goes away, that sub-720-FICO lending largely goes away,” Green said.

The second issue that Green noted involves Ginnie Mae, which is the source of liquidity for both FHA and VA lending. “It has a staff of 130 people managing guarantees of $1.7 trillion,” said Green. “Its staff needs expanding, and with these budget cuts, that’s not going to happen.

“Their job is to monitor issuers,” he added — and that’s difficult enough as-is with current staffing. “If the monitoring of issuing gets worse and there’s bad behaviors on behalf of issuers, you could have the Ginnie Mae program thrown into chaos, and the source of liquidity for FHA and VA lending would be disturbed,” Green noted.

Finally, if agents or brokers are hoping for some deregulation of TRID — TILA-RESPA Integrated Disclosures (the Truth in Lending Act and the Real Estate Settlement Procedures Act) — people will need to rewrite those rules, noted Green. Without money to hire and pay those people, “it’s going to take much longer to do that,” Green said.

“As it is, only about one-fourth of the people who are eligible for housing assistance get any,” Green added. “Between 4 and 5 million people need housing assistance; if we cut back 10 percent, that’s 500,000 people who won’t be able to afford their housing. You’ll see upticks in homelessness, and some of those people will include working mothers with children and veterans.”

Responses from the real estate industry

J. René Ward, a broker-owner based in Texas, said she’s concerned that the cuts could disproportionately impact underserved minority communities in this country.

“These programs assist homeowners become part of the American Dream through education, down payment assistance and grants,” Ward said. “Are we perpetuating a larger population of renters? Are the ‘haves’ taking away money and financially benefiting from the ‘have nots’ by forcing them to rent? Are the ‘haves’ buying foreclosed properties and leasing them back to the community that can no longer afford a down payment to purchase?

“And who fills in the gap? What organizations, churches, community groups have the funds to subsidize a replacement program?

“The ability for families to have a path for upward mobility and wealth building starts in their first home. The inability to have (and retain) their first home causes a disparate wealth gap that last for generations,” Ward concluded.

Last week when the proposed $6.2 billion HUD cut was teased, Inman writer Teke Wiggin asked members of the Coast to Coast Facebook group what they thought the implications could be for real estate.

“From a home buying and selling perspective, nothing. The cuts aren’t coming from FHA loans, but from HUD public housing,” said Todd Miller, founder and CEO of real estate app Homing In.

“Fewer people get housing assistance, fewer people get back on their feet, fewer buyers down the road,” replied Aaron Dickinson, a real estate agent in Minnesota.

Leslie Ebersole, a broker and team leader with Baird & Warner, had this to say:

“In the past decade, income growth hasn’t kept pace with housing costs, especially for those making the least, particularly for entry level and low-income housing.

“Economists have warned for the past several years that more people are slipping below the poverty line. The safety net of government-supported housing may seem to be expensive, but consider what would happen if it’s withdrawn…

“When people become poorer, crime almost inevitably increase. Police and social services become even more strained. Homeless shelters and temporary housing facilities are already inadequate, and, they cost more to operate than low-income housing that is subsidized by the government.

“I could go on, but it seems so clear to me that this is a false economy. Reducing federal spending simply transfers the burdens to the states, and, at a rate of increase is itself increasing.” 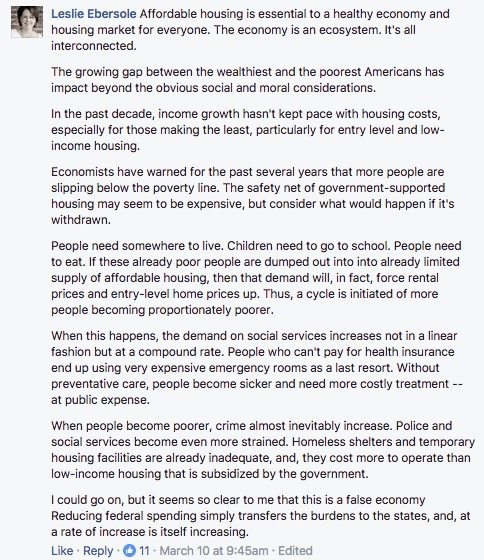 Diane Yentel, the President and CEO of the National Low Income Housing Coalition (NLIHC), stated that the proposed cuts would have a deeper effect on low-income citizens than the pages outlining HUD’s changes indicate.

“His budget also would eliminate the U.S. Interagency Council on Homelessness, which coordinates the federal response to homelessness across 19 federal agencies, legal aid services that provide the only resource available to help deeply low income people avoid unwarranted evictions, and resources to help low income families heat their homes in winter.

“President Trump and Office of Management and Budget Director Mick Mulvaney would have us believe that their budget would continue to provide housing assistance to the 4.5 million low income families who currently rely on these resources. However, their proposal identifies only $4.1 billion of the $7.5 billion they propose to cut. While they suggest that the remaining $3.4 billion can be addressed through ‘reforms that reduce costs,’ there is simply no way to make up for this funding gap without directly harming the low income people who currently receive and rely on HUD housing assistance.”

NLIHC will be hosting a webinar on March 20 at 4 p.m. ET for opponents of the proposed budget.