The 10-year T-note and mortgage rates have reached post-election lows, 2.20 percent and 4.00 percent respectively. What in the world are we doing down here?

What in the world are we doing down here? 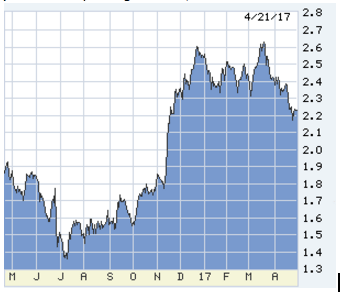 The 10-year T-note in the last year. A perfect chart set-up for further decline, but the Fed is coming. Ignore the Trump Trade. Extend the up-trend July-November in straight line, and you wind up right here, and the bottom of this rally. That’s my theory.

The grumps have their usual explanations. The economy is secretly sinking. First quarter GDP will be barely positive. Car sales have flattened. There must be something wrong with housing (always, they say). And old faithful: There’s too much debt out there. It will crush consumers sooner or later.

Then the fancy stuff. Trump stimulus is in trouble. The French election could go badly, the global populist wave progressing. The government might shut down next week. North Korea. The Fed will stop tightening. Already overdone. 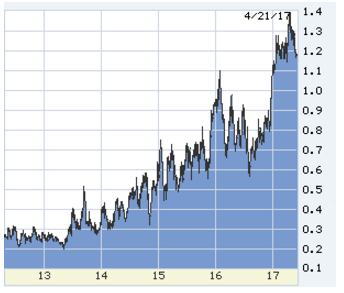 The Fed-predictive two-year T-note in the last FIVE years. The Fed is coming.

And the Trump bejabbers. Everyone at a bond desk is a shade-tree economist, scouring news for public policy changes that will affect the economy or markets.

But the news flow now is both magnetic and random. Like watching a drunk taking a sobriety test, one moment counting backward clearly, the next overcome by the juice and falling down while attempting a straight-line walk.

One at a time in no particular order, argue with the grump, and then the heart of the matter — from the Almighty (more on that below). 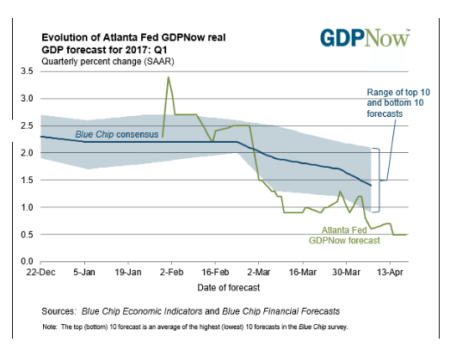 The Atlanta Fed GDP Tracker at 0.5% in the first quarter is a quirk of data. The Fed’s vice chair said so today, and I ain’t arguin’.

The news focus on the French election is just media hype, competing for clicks. Nothing in French internal politics has mattered to the outside world since the last of its three failures at self-defense from the Germans (1871, 1914, 1939). France has half the population and GDP of Japan.

France has an extraordinary government staffed by professionals who do not change with new presidents — hence France functions very well no matter who happens to be president. 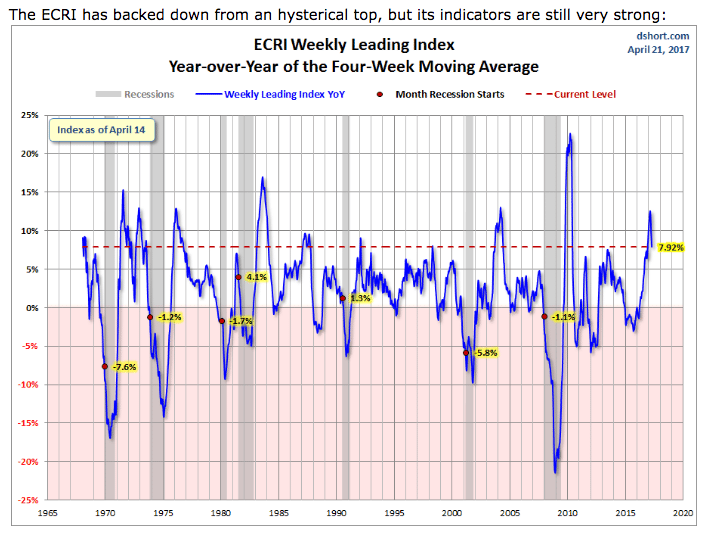 For very different reasons, our government works the same way. We do change most under-undersecretaries with new presidents, which only adds to the Federal paralysis built in to our constitution. U.S. government functions at the state and local level; D.C. is just for show.

Despite the addictive nature of Trump and Trumpisms, very little here has changed for the economy with his arrival.

The grumps are just that, tired old arguments repeated.

Before the advice from the Almighty, stick with the basics. The emergency stimulus by the European Central Bank and Bank of Japan is pushing down on U.S. long-term rates. However, the Fed is coming, and the bond market is fighting the Fed — a breach of Rule One.

The Fed may not hike in June, but reliable speakers (Kaplan in Dallas, vice-chair Fischer) have begun unmistakable warnings that the Fed is on track with two more hikes this year. Even the International Monetary fund has brightened its global forecast.

If so, what in the world are we doing down here? Not for long.

Except — the Almighty has a surprise. In the case of the economy and markets, Ben Bernanke is as close to all-knowing as we get. He is now at the Brookings Institution and blogs irregularly, unprecedented for a retired Fed chair.

Alan Greenspan occasionally has things to say, but having never apologized for presiding over the worst credit bubble in human history; his remarks receive painful silence.

Paul Volcker has more to say now, 30 years after retirement than just after (never wrote a memoir).

However, in future Fed history, Volcker will be known as the Great Punisher — a courageous thrower of lightning bolts, but at targets not always deserving. Nudging might have served as well as the smoldering cinders he’s left in his wake.

Ben Bernanke saved us. Saved the world. Simple as that. Despite opposition throughout from all quarters. The man is worth listening to. On April 12 he published a blog post describing research suggesting that into the multi-decadal future, the Fed will be at or near zero percent 30-40 percent of the time.

His paper addresses Fed policy (and there is a part two coming soon) and the problem of ZLB — the zero lower bound.

What can or should the Fed do to stimulate the economy when its rate is at ZLB?

Negative rates have not worked well except in small economies. We can return to QE (quantitative easing). And we can try hard not to create a recession by accident — but we’ll fall into them occasionally no matter what. Then what?

Bernanke’s blog is not suggesting a recession nearby, and he would never complicate Janet Yellen’s life by commenting on current Fed policy.

The significance to us is to reduce fear of an explosion in rates. A long-term soggy economy (demographics and low productivity) will mean soggy rates for us, too.

Having lived through the 1 percent-per-month inflation which emboldened Paul Volcker to fry us, I’m happy with soggy. 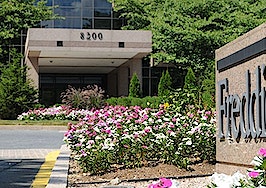