We have consolidated all of the vital information on today’s technology and identified the following key technology trends for 2017.

In 2016, real estate technology companies raised a record breaking $3 billion across 209 deals; to put this in perspective, that is 10 times the funding we saw only four years ago, and the numbers keep growing. 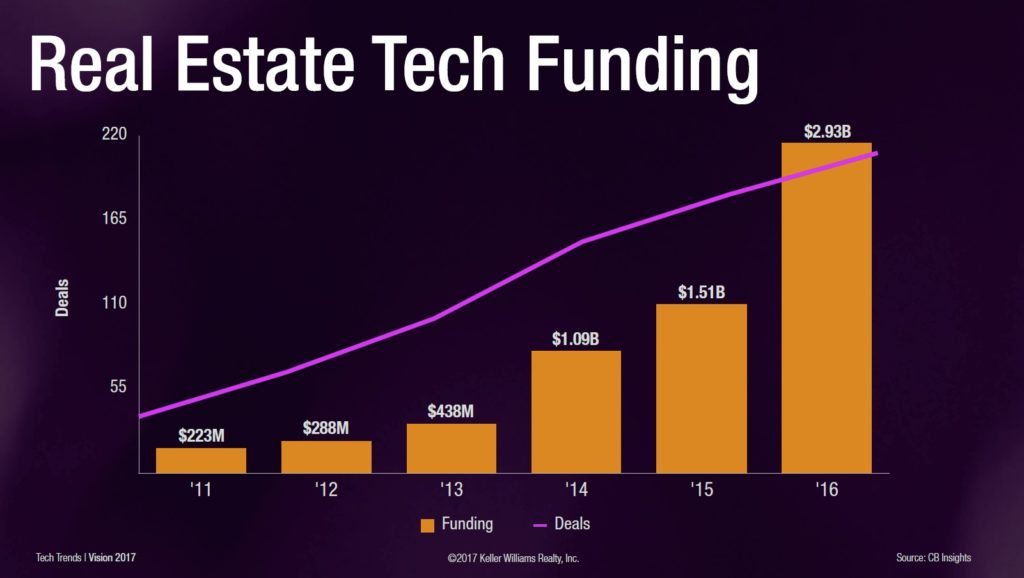 Our main goal is to look at the technology landscape today and focus on key emerging trends we believe agents should know about in order to stay ahead of the curve.

Keller Williams co-founder Gary Keller has consolidated all of the vital information on today’s technology and identified the following key trends for 2017:

Without a doubt, AI is the most significant technology trend with the greatest potential to be a game changer. It is playing an increasingly large role across multiple industries, and we believe 2017 is the year it makes a splash in real estate.

Theoretically, AI is broken down into three categories: narrow, general and super intelligence.

Narrow AI is the ability for a machine to perform a specific task as well as — or potentially better than — a human.

This doesn’t happen out of the gate: AI technology gets smarter and better at each task by gathering information from each interaction it has during machine learning.

General AI is the ability for a machine to operate all tasks with the intelligence level of human, which is more science fiction than reality at this point.

Experts believe general AI to be a natural part of the evolution of technology, although no one is sure of the timeline.

Rob High, IBM’s CTO of the Watson project — arguably the most powerful AI solution in the market — isn’t quite sold on the value of general AI: “I don’t believe there is a lot of value in replicating the human mind in a computer

The world of super artificial intelligence still remains too unexplored to have an impact on the industry, and the fact remains that 100 percent of AI technology on the market today is narrow AI and focused on doing a specific, simple task very well in order to assist agents — not replace them.

AI’s first task in real estate is improving agent response times during consumer interactions, which is why chatbots are so prominent right now.

As the most common AI solution penetrating the industry today, chatbots understand natural language questions and produce responses from information stored in their databases, which is usually a combination of MLS and third-party property and market data.

An example of this can be seen in the following simple conversation: 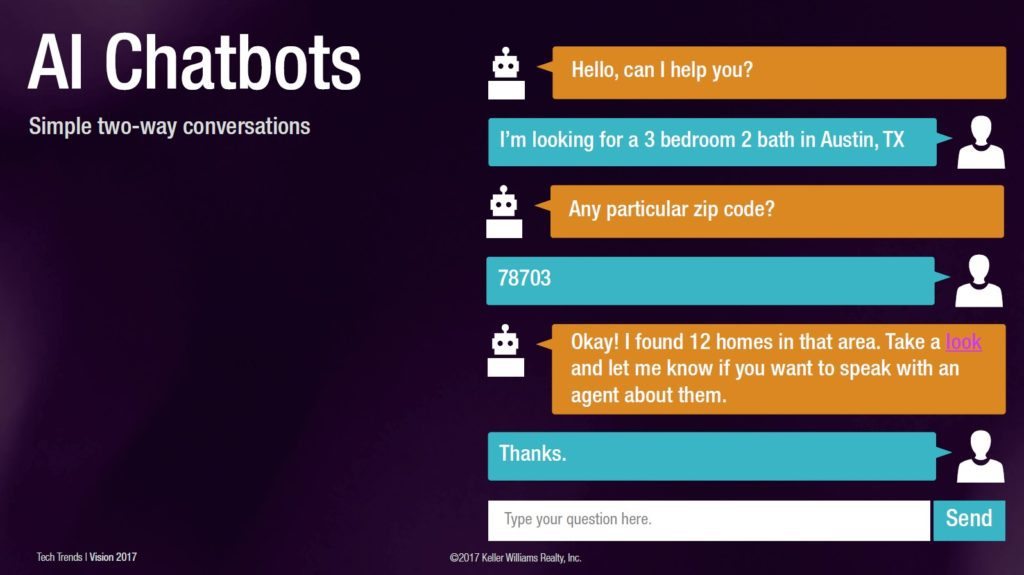 Contextual bots are a more intelligent version of the same AI technology.

These machines assist users during specific experiences and not only provide answers to questions, but make unprompted recommendations and suggestions within their specific area of expertise.

They do this by understanding not just the question, but the context of the conversation. For example: 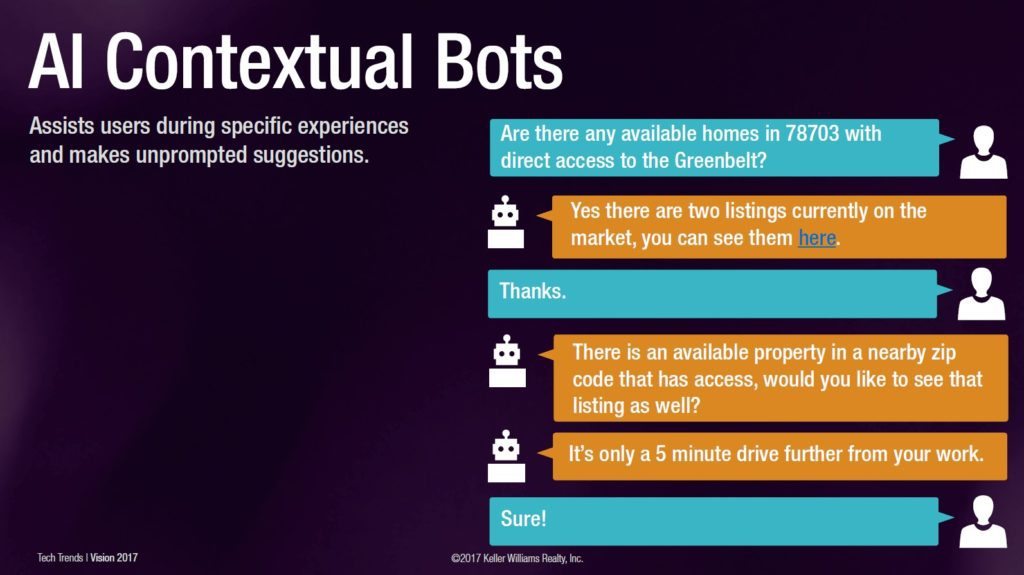 The final and most advanced level of AI in real estate is the personal assistant, which answers questions and responds to commands that have direct access to applications outside of the conversation, such as email and calendars. 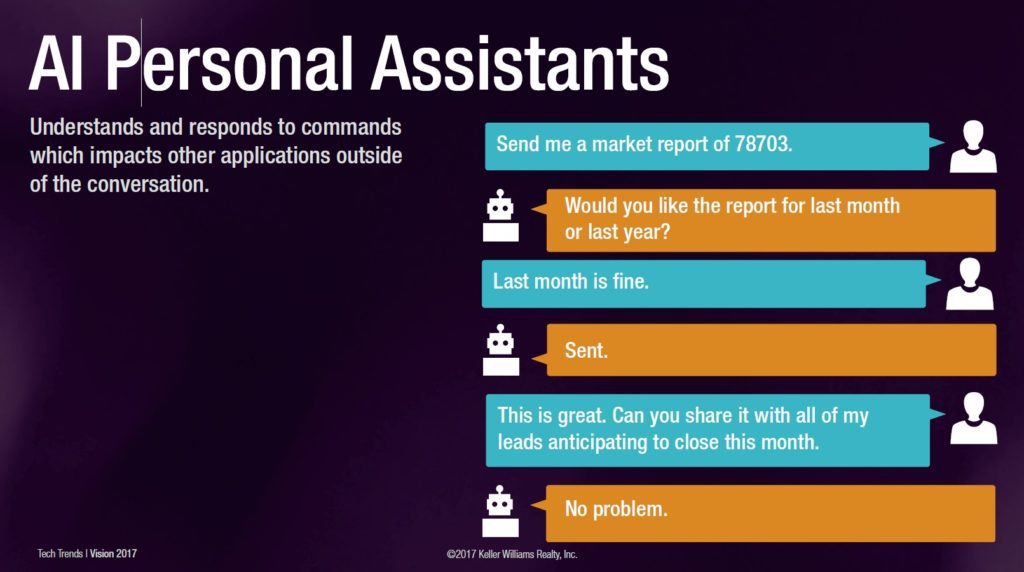 This is the equivalent of Siri or Alexa tailored specifically for the real estate industry.

Computer visioning is when a program extracts attributes and information from a single image or a sequence of images.

There have been a handful of pioneers in this space who have leveraged computer visioning in order to extract more granular information from listing photos. Identifying granite countertops or finding specific design styles would be examples of this ability. 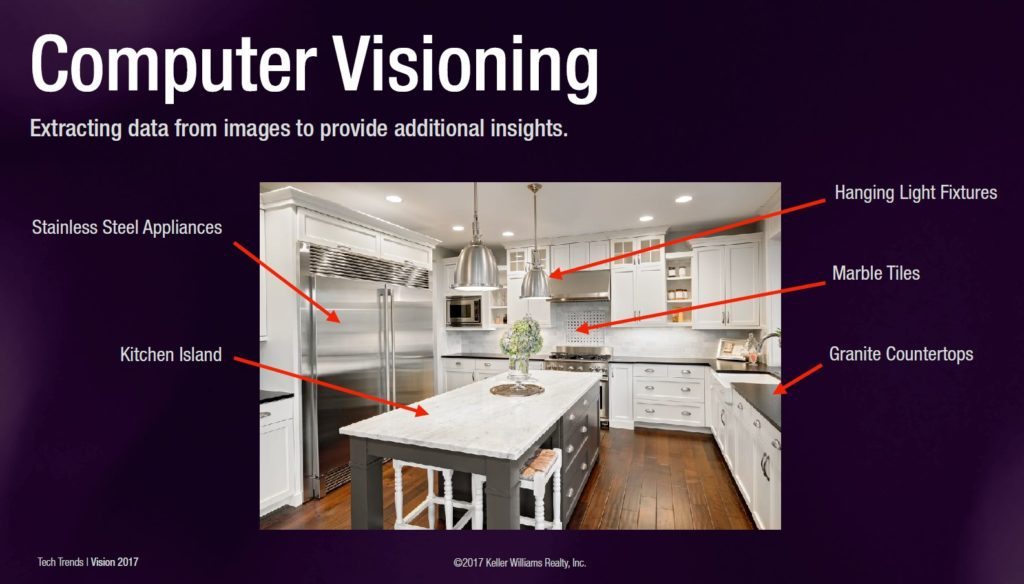 This solution was once relatively cost prohibitive until Amazon and Google rolled out affordable image recognition services at significantly lower prices.

This allows developers to detect broad sets of objects or inappropriate content, capture image sentiment analysis and extract text for the cost of $1.50 per 1,000 images.

Not long after, Amazon launched a service called Rekognition, which allows developers to add a deep learning-based visual search and image classification to any application for as little as $1 per 1,000 images.

These services don’t currently extract information specifically for the purpose of real estate, but they provide a core platform for future developments.

As this technology becomes commoditized, we should see more players providing value based on the new datasets being extracted from photos.

This technology has great potential for understanding the consumer search experience at a higher level.

VR has been an active trend since Matterport launched in 2011 and provided agents with the hardware to capture 3D images of properties.

As more VR headsets have come to market, such as Samsung Gear VR, Oculus Rift and Google Daydream, the industry has naturally taken these 3D models of homes and created virtual reality experiences out of them.

The goal is to give consumers an engaging VR experience that makes them feel as though they are walking through the home. 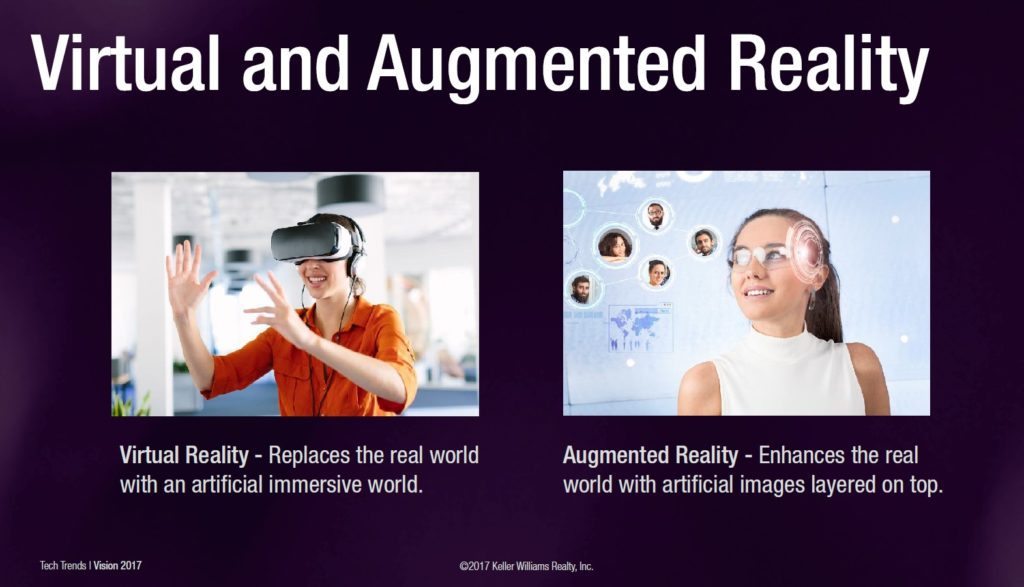 First, VR headsets are “goofy,” for lack of a better term.

Consumers haven’t adopted them at the rate suppliers anticipated, and analysts attribute this to product cost, lack of computing power and the overall “goofiness” of wearing a headset.

Second, the cost for content creation has been too high, limiting adoption to the luxury market and the home building industry.

The good news is that the cost of content creation has dramatically decreased as photography service providers have economically scaled their ability to create 3D models of homes.

The market is becoming increasingly competitive and you can find providers offering 3D home model services for less than $250.

Ultimately, this number will drop to $0, at which point we can anticipate adoption to really take off as phone manufacturers begin utilizing technology similar to Google Tango to give consumers the ability to create 3D renderings of their homes right from their smartphones.

Google Tango is a developer platform for augmented and virtual reality apps. Currently, there are only two devices that have Google Tango technology – the Lenovo Phab 2 Pro and Asus ZenFone AR — but we anticipate more smartphone manufacturers to incorporate this technology in their phones over the next several years.

Until then, we’re seeing this trend as more of a shiny object since there is no evidence to suggest that the VR experience decreases the days on market or increases the sales price of a home.

AR is the ability to enhance the real world by layering it with artificial images, similar to Pokémon GO.

It will be interesting to see how augmented reality materializes into real estate-specific products.

Like VR, AR also falls into the shiny object category.

Simply put, blockchain is a data infrastructure that allows for the digital transfer of ownership. It’s a model that empowers two individuals to transact any asset on a verifiable, secure and public ledger.

Blockchain is the infrastructure on which Bitcoin operates. It’s not a physical structure, but rather a network of computers that automatically verify each transaction on a public ledger.

It’s built to create a direct peer-to-peer transaction without the need of a financial institution playing the role of the middleman.

The current model must change in order to operate in the real estate industry, but the underlying blockchain technology is already there.

Most blockchain enthusiasts are approaching real estate with the mindset of enabling the digital transfer of homeownership. 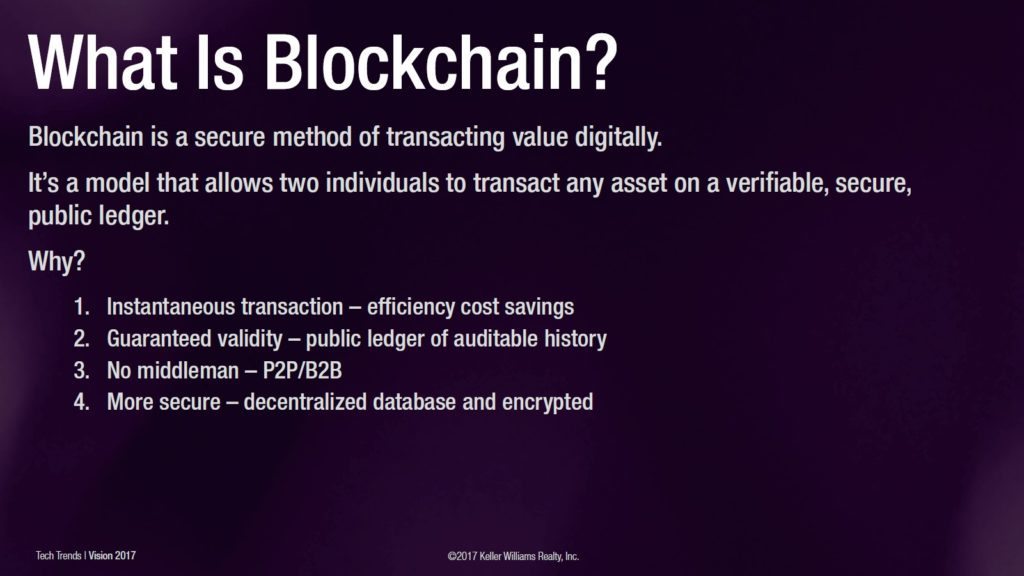 While many things must happen before this can really work — particularly the digitization and coordination of title records — we’re beginning to see companies and county record offices pilot the technology in creative ways.

Today, more than 40 top financial institutions and a growing number of firms across industries are experimenting with distributed ledger technology as a secure and transparent way to digitally track the ownership of assets, which could speed up transactions and cut costs while lowering the risk of fraud.

Goldman Sachs estimates that blockchain technology could save $2 billion to $4 billion in the housing industry by creating more transactional efficiency and reducing costly manual reviews and future title claims.

Blockchain’s role in real estate will be to improve the transparency and efficiency of the title transferring process.

There’s great opportunity for this technology to streamline the title transfer process by replacing the need for escrow, insurance and notaries.

We don’t anticipate blockchain’s impact in the short term, but it is a trend we will be closely watching over the next few years.

Adi Pavlovic, technology strategist at Keller Williams Realty International, is focused on keeping a pulse on the real estate tech industry as well as studying the behavior between agents and technology. 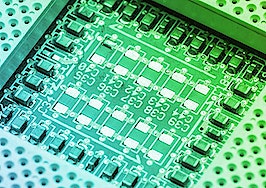 What real estate technology would you create with $33M? 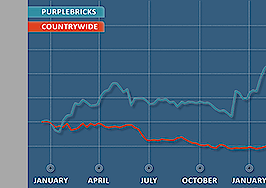 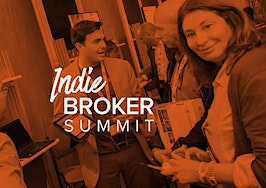