According to the National Association of Realtors Housing Opportunities and Market Experience Survey (NAR HOME), the solution to low inventory woes may not come from robust housing starts or flipping single-family rentals into owner-occupied homes again. It may come from the 71 percent of homeowners who feel it’s a “good time to sell” their home — opening up a wealth of new listings.

According to the National Association of Realtors Housing Opportunities and Market Experience Survey (NAR HOME), the solution to low inventory woes may not come from robust housing starts or flipping single-family rentals into owner-occupied homes again. It may come from the 71 percent of homeowners who feel it’s a “good time to sell” their home — opening up a wealth of new listings.

“Perhaps this notable uptick in seller confidence will translate to more added inventory later this year,” said NAR Chief Economist Lawrence Yun in a press release. “Low housing turnover is one of the roots of the ongoing supply and affordability problems plaguing many markets.”

But, as most things in the housing market, it’s not that simple. 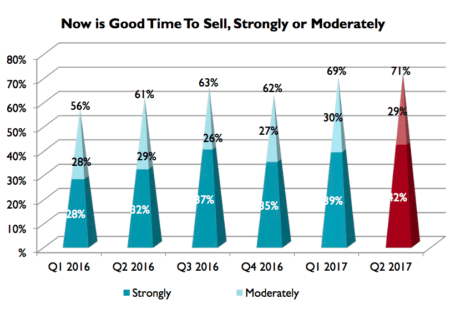 First, the 71 percent of homeowners who feel its a good time to sell aren’t acting on their confidence.

“There are just not enough homeowners deciding to sell because they’re either content where they are, holding off until they build more equity, or hesitant seeing as it will be difficult to find an affordable home to buy,” Yun said.

“As a result, inventory conditions have worsened and are restricting sales from breaking out while contributing to price appreciation that remains far above income growth.”

Second, the survey also reveals that the people who would be buying these listings aren’t feeling so confident about their ability to become homeowners. Only 52 percent of renters believe it’s a good time to buy, a 10 percent year-over-year and 4 percent quarter-over-quarter decline.

Although renters are slightly less likely than homeowners to expect home prices to rise in their individual communities over the next 6 months (51 percent vs. 54 percent), their perceived ability to actually qualify for those homes is keeping them at bay. 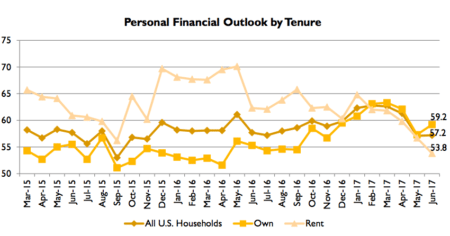 Renters had the lowest personal financial outlook index. With an index score of 0 to 100, with 0 being “worse,” 50 being “same” and 100 being “better,” the renter score of 53.8 shows renters are on somewhat shaky ground when it comes to personal finances.

Furthermore, 72 percent of respondents making under $50,000 believe it would be at least “somewhat difficult” to qualify for a mortgage — a 44 percentage point difference between respondents making $100,000 or more (28 percent) who feel the same.

“It should come as little surprise that the confidence reading among renters has fallen every month since January (64.8) and currently sits at its lowest level (53.8) since tracking began in March 2015 (65.7),” said Yun in a statement.

“Paying more in rent each year and seeing home prices outpace their incomes is discouraging, and it’s unfortunately pushing homeownership further away — especially for those living in expensive metro areas on the East and West Coast.”

Zillow’s latest “Breakeven Horizon” study backs up Yun’s assertion by showing that in the nation’s largest markets, it can take nearly 5 years of homeownership before purchasing a median-valued home makes more financial sense than renting.

In San Jose, California, a buyer would have to spend 5.1 years for the same result. In San Francisco, it’s 4.9 years, followed by Los Angeles with 4.7 years. The markets of Washington, D.C.; and San Diego, both at 4.5 years, round out the list of the five largest markets with the longest breakeven horizon.

Is moving the solution?

To escape rising home prices, respondents are considering moving to a more affordable region, such as the Midwest, which has the highest concentration of survey takers (55 percent) who said homes are affordable.

Twenty percent of all respondents said they’d move to a more affordable community, but those making under $50,000 (27 percent) and millennials (29 percent) are the most willing to make the move in order to have a better chance of becoming a homeowner.

“Areas with strong job markets but high home prices risk a migration of middle-class households to other parts of the country if rising housing costs in those areas are not contained through a significant ramp-up in new home construction,” said Yun in the release.

Although moving to a more affordable region or having those 71 percent of owners who feel its a good time to sell put their homes on the market, there’s still only one real solution. “I believe there is one answer to both of your questions: more inventory,” said Yun in an emailed statement.

“More new homes for sale would increase the pool of listings homeowners would have to choose from if they decided to sell their home,” he added. “Many right now are staying put because they will likely sell their home a lot quicker than it will take to find another home to buy because of tight supply.”

“More new construction at entry-level prices and homeowners listing their home for sale would also increase the number of listings and alleviate the supply shortages and weakening affordability that is hurting renters,” he said.

“Minimal choices and rising home prices in many parts of the country are impacting renters trying to convert to homeownership.” 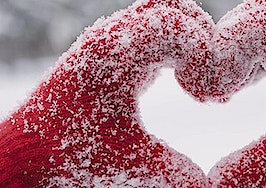 Does the real estate industry take its homeownership love affair for granted?