You’ve taken your buyers to see a dozen properties to no avail. Then, they come across the perfect home online. While they rejoice, your stomach drops: It’s a for sale by owner (FSBO). But you may be in luck — the sellers said they’d pay the buyer’s agent a 3 percent commission, and you submit an offer on your clients’ behalf. Are you home free? Hardly.

You’ve taken your buyers to see a dozen properties to no avail. Then, they come across the perfect home online. While they rejoice, your stomach drops: It’s a for sale by owner (FSBO).

But you may be in luck — the sellers said they’d pay the buyer’s agent a 3 percent commission, and you submit an offer on your clients’ behalf.

Are you home free? Hardly.

FSBOs are layered with an extra challenge because in bypassing the MLS, the seller isn’t bound by licensing agreements or the broker-to-broker compensation rules that underpin the cooperative commission model.

In the case of Ohio-based real estate agent Rita Boswell, when she finally got a call back from FSBO sellers after making an offer on behalf of her buyers, they claimed to have received a better offer and asked if she’d be willing to cut her commission down to 2 percent.

Should you take less money for the same — if not more — work to make your buyers happy? Or should you refuse to budge and potentially lose the house?

Boswell took to social media for advice from fellow agents.

What she got back was a plethora of strategies, tactics and options that can help you know what to do the next time you’re dealing with a FSBO — before (and after) you get hit with a request to cut your commission.

First things first: Check with your broker to see what the commission-cutting policy is at your brokerage; some will allow agents to make that decision while they’re in the field.

Before making up your mind, explore your options. Many agents suggested asking the buyers to make up the commission difference.

“Would it not be better if your buyer offer[s] more money to buy the house if he wants it that much? It’s usually the buyer who comes up with more money if he wants to buy a house, not the agent who cuts it down,” said New York-based agent Sueli Schmitt.

If the buyer refuses to negotiate and the house is lost, that puts some of the responsibility back on the client for failing to come up with a compromise in the form of a counteroffer, she added. (In Boswell’s case, the buyer wasn’t interested in making up the difference.)

Others insisted on asking for proof (namely, page one of the offer that the seller claims to have received) before making any decisions. But if the sellers refuse, which they can — and in Boswell’s case, they did — you have a tough decision to make.

“The commission is fully negotiable until the contract is signed. So whether it is with an agent or a FSBO, the commission can be negotiated as needed. So then it becomes a question of is it still worth it,” said Hawaii-based broker Bryn Kaufman.

Take the 2 percent and move on?

Many agents agreed that taking the 2 percent is better than nothing and that reduced commission, whether it be a full percentage point drop or less, is becoming more common.

“Like it or not, your commission is part of the negotiation since the seller is a FSBO. I for one would not want to tell the buyer they lost a house because I took a stand and would not negotiate fully,” said Julie Cindric, a Realtor in Florida.

The sellers have no reason to appreciate what you do, said Debbie Coleman Rose, a New Jersey-based sales associate. Indeed, they chose to go the FSBO route. Your fiduciary responsibility is to your clients (the buyers) and their needs come first, she added. In her opinion, agents can either dig their heels in or make their buyers happy.

Lenny Batista, a broker-owner in South Florida, added: “Two percent of something is better than 3 percent of nothing. I have discounted commissions to salvage deals in the past. Have the FSBO accept your offer at 2 percent. If they’re not willing to put it in writing, then move on. Greed has killed a lot of deals.”

Others suggested that you can reap rewards in the form of referrals from one or both sides of the transaction. Beverly Hills-based Realtor Stefen Lee Liberti suggested that agents should never cut their commission or give something up without trying to get some benefit in return. He suggested telling the sellers that the 1 percent reduction is doable, but only in exchange for five referrals or a handful of positive online reviews.

On the other hand, some agents believe that you should never agree to cut your commission — their time-honored argument being that in other professions, when it’s time to get paid for the job you were hired to do, it’s simply not a matter of negotiation.

“I think if we continue having this mentality ‘take whatever you can,’ our profession will never be respected as much as others … we need to stop selling ourselves cheap,” said Florida-based broker Lana Daleo.

And a FSBO is riddled with its own hiccups, which makes it especially important for agents on the buy side to stand their ground, some argued. “With a FSBO, you will be doing both sides of the process,” said Los Angeles-based agent Richard D. Lawler. “The last thing I would do is give up 1 percent. Show the seller your value.”

Agents can remind sellers that the ins and outs of a sale are complicated, and taking an offer from another buyer who isn’t represented — as was the case with Boswell — is more work for them.

“Most FSBOs haven’t thought about all the paperwork, home inspection, repairs, appraisal or even qualifying the buyer — so it is pretty easy to demonstrate the value and protection you bring to the deal to be sure everything is done in a legal and orderly fashion,” said Karen Kitzel, public relations manager at SkillsUSA in Leesburg, Virginia, in a conversation in the Facebook group Lead Gen Scripts and Objections.

Northern Virginia-based Realtor Deborah Mann suggests reminding sellers that with your commission comes attention to detail, ensuring that all requirements and deadlines are met — and that the transaction actually makes it to closing in time.

Moreover, Bernice Ross, the author of Waging War on Real Estate’s Discounters: How to Unlock the Door to a Full Commission, recommends reasoning with the sellers. Try telling them: “You need a very strong negotiator to handle this situation, wouldn’t you agree? So if I can’t even negotiate a full commission on my behalf, how effective do you think I would be holding the deal together when inspection and other issues in the transaction arise?” Ross advised.

How it all played out

In Boswell’s case, she did ask to see the other offer, but the sellers refused to show it to her and her broker agreed that they didn’t have to because FSBOs aren’t bound by the license rules that agents abide by.

So she saved the sale for her buyers and sent the sellers a new agreement, reducing her commission to 2 percent.

There are many cases in which an agent might be asked to cut his or her commission to save a deal. An informal poll in Coast to Coast found that nearly nine out of 10 agents would cut their commission by $5,000 each to save a $1 million deal.

Here’s a list of tactics for agents to use the next time that “reduce your commission” talk arises: 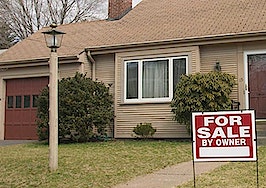 An alternative FSBO script: 'Where are you moving?'