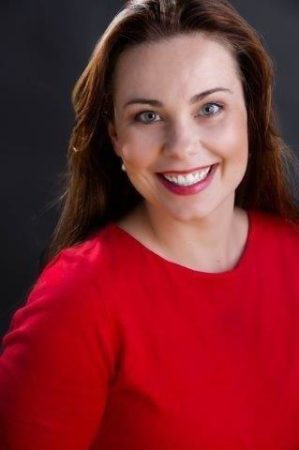 A real estate client who closed on a home one week ago calls to tell you “There’s nothing left.” On top of that you find out your office is destroyed — the roof collapsed — and you don’t have rental insurance.

These are the types of challenges Alissa Spears, an independent brokerage owner and 18-year real estate vet in Rockport, Texas, is dealing with from her remote base four hours from the coastal town of 9,500. She and her family fled to a bed and breakfast in Blanco, Texas, Thursday evening, heeding the advice of emergency authorities to get out of Dodge amid the threat of Hurricane Harvey.

A Category 4 storm is the last thing you wish upon your beloved community and 14-month-old thriving business, and Rockport was left battered with no telling when residents will get their power back.

But the Australian-born Spears, founder of Spears & Co, is determined to be productive and remain relevant in a town that she may not be able to return to for weeks.

Start by being a resource

By Sunday, Spears had some concrete ideas for how to take action this Monday morning. She had reached out on the CRS Facebook Group “We are CRS” soliciting advice.

“A number of specialists came forward and said, ‘I’ve been through this before, I’ve been through Ike and Rita, and here’s what you need to do: Create a page where your community relies on you,'” Spears said. 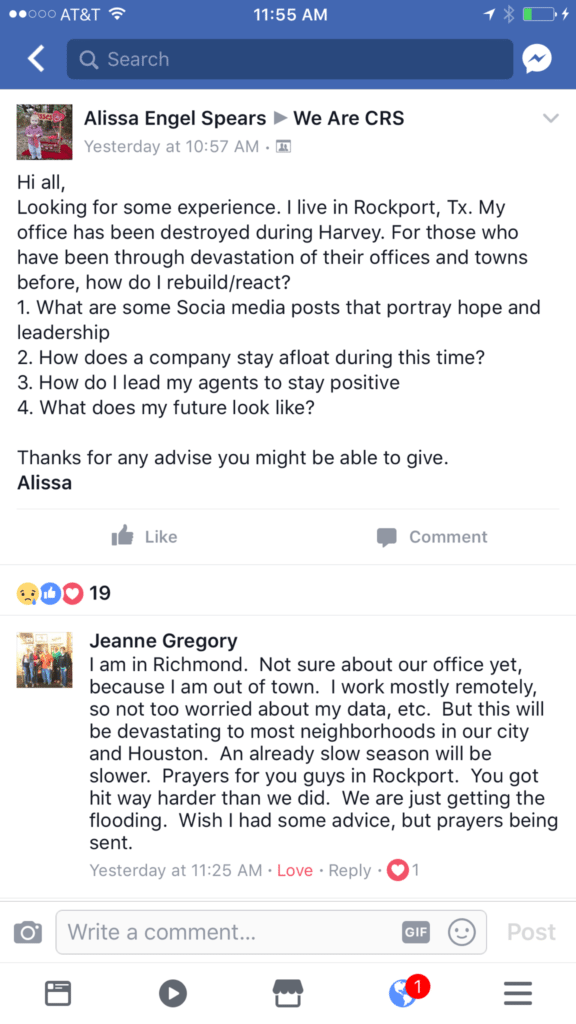 First thing this morning, she put together a Facebook post with recommendations for trustworthy Rockport contractors, starting with calling the contractors to get their blessing before listing them.

The post, a handy resource for people needing home repairs in her community, has already attracted 2,600-plus views and 87 shares and counting.

“I need to be be relevant right now,” she said. “Yesterday, I didn’t know what to do. What’s the first thing you should do? How can you help your agents; how can you be beneficial to the community? How do you save contracts? What are the day-to-day operations of someone who has had a catastrophic event?”

The CRS community had the answers, she said. Getting up at 5 a.m., taking their suggestions to heart and being productive not only helped Spears’ morale but also created buzz around her company.

Spears has also been in touch with each of her six agents via text and email, checking in on how they are and how their homes are faring.

“I want to boost morale, touch base and give them a plan of action, but right now a lot of them are still in shock,” Spears said.

Counting her blessings, Spears added: “At least we didn’t have a 20-foot wall of water wash over the town, which I was very concerned about. 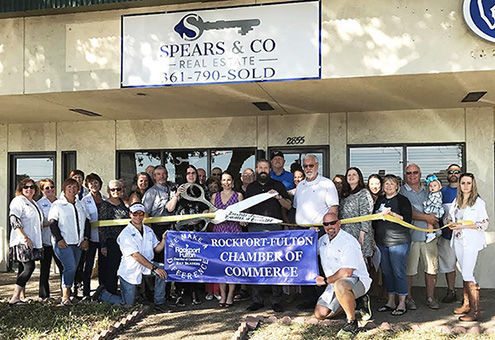 The Spears and Co. office at its opening.

“We do have structural damage — roofs and fencing are going to be the biggest challenges. We don’t expect the city to have utilities on, water and electricity for four to six weeks and there is only so much to you can do out of a generator and camper.”

Her office administrator and personal assistant stayed in Rockport during the hurricane. Her assistant told her, “you can’t believe the devastation.”

Spears doesn’t expect to be back in Rockport for a stint; she has a son with epilepsy who needs to be near a hospital if he has an attack. Those who stayed in town have checked out her home, and it survived well, so she has that peace of mind.

Looking ahead, Spears has to restart many conversations with clients about why they should come to Rockport to live or retire. Some have emailed her since Friday; one couple looking to retire in Rockport is now opting for Tucson, Arizona. Others under contract are asking: “Where do we stand?”

Some sleepless nights are to come, as parts of the contract Spears is used to brushing over will be examined with a fine-tooth comb.

As she has watched the devastation hit her town from a distance, it has been an “out of body experience,” Spears said. “There’s a part you that sits there and thinks, this is happening to me. You are so used to looking at others go through this.”

After working 16 years with Lynn Johnson of Lynn Johnson Realty, Spears still hears the late agent’s voice. “I feel her guiding me through this time,” she said. “I’m open for ideas on anything. I’m still in shock, but feel I must keep moving forward.” 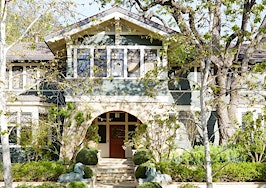 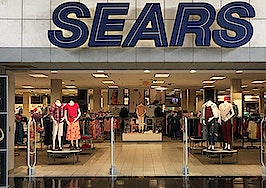 When it comes to commissions, if you’re 'Sears,' you’re sunk