Long-term rates are hanging on by fingertips to a key level, the stock market has the sillies (again), and all incoming economic reports are hot. It’s going to take a negative event (geopolitical or economic) to hold rates down where they have been for most of this year.

Long-term rates are hanging on by fingertips to a key level, the stock market has the sillies (again), and all incoming economic reports are hot. It’s going to take a negative event (geopolitical or economic) to hold rates down where they have been for most of this year.

The current Fed leadership is intent on gradual increases in the overnight cost of money (fed funds) through next year. The Fed’s hikes thus far have been free money, merely liftoff from zero. The next ones will push upward on long-term rates also, and those markets are still in denial.

That whole calculus is for the moment overwhelmed by the president’s pending choice of a new chair — which of the candidates, what that new chair may say upon appointment, during confirmation hearings, and then when taking the seat early next year. Right behind, although less important: nominees to fill other vacancies among the Fed’s governors.

With apologies to Stephen Hawking, a brief history of Fed time follows. Some will be relieved at the tale, some more anxious. 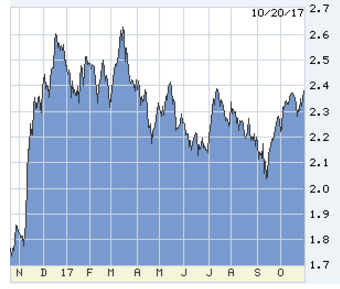 The US 10-year T-note, one year back. Break upward through 2.40 percent and we will not only go up farther, but in unstable fashion.

The Fed was created by Congress (not the constitution), but presidents nominate the chairs to be confirmed by the senate. The White House is most sensitive to economic good news and bad, but both it and Congress struggle with their grant of independence to the Fed, frequently regretful.

The purpose of all central banks is to cushion economic downturns, prolong expansions and preserve a stable currency within the limits of national culture. Germany expects zero percent inflation; in Argentina any inflation below triple digits is a victory. Most of the time inflation is the enemy, but in the last fifteen years the risk of deflation has confused everything. 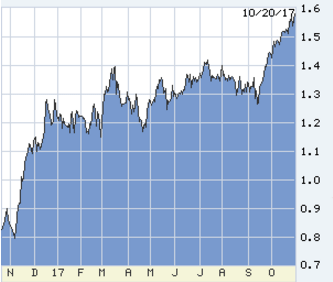 The US 2-year T-note is the short-term Fed telltale, in this last week reaching its highest yield in ten years. A .25 percent hike in December is priced-in, and 2s are beginning to work on the next one in late. winter. Watch 2s especially when we learn who the next chair will be.

The first Fed chair sat down in 1914. Those holding the gavel did little until the 1920s when they got it wrong, and in the 1930s when they got it wrong again. Both errors came from inaction. In their defense, the whole world was struggling with the necessary end of the gold standard and trying to develop monetary theories appropriate for a new age of commerce.

During and after World War II, U.S. economic dominance was so complete that there was little for the Fed to do, and even less chance of error. The modern, active Fed began tentatively in the 1950s with its effort to “fine-tune” the economy by creating mini-recessions any time inflation appeared to creep above 2 percent. The longest-sitting chair has been William McChesney Martin (1951-1970) who gave us the best-ever view of the Fed’s duties: “Just when the party gets going, take away the punch bowl.”

Martin acknowledged the overconfidence in fine-tuning. His one error was not really his, but the first big fight over Fed independence. LBJ embarked in 1965 on a “guns and butter” policy, refusing to raise taxes to pay for Vietnam. Martin gave in to presidential power in wartime, and so began twenty years of inflation. 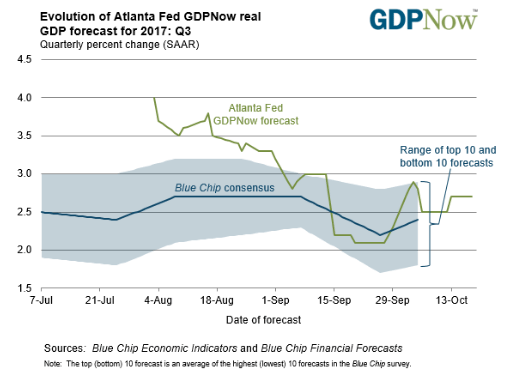 The Atlanta Fed GDP Tracker is happy as can be, which will embolden any Fed chair to proceed upward.

Martin’s excellent work was followed by an unhappy time for the Fed. His successor was Arthur Burns, who committed the most unseemly mistake in the Fed’s history: inflation rising.

The whole Ford presidency was given to fighting inflation, and by its end had gotten CPI (consumer price index) back down to 4 percent. Burns’ term ended in 1978, and no one whom I know mourned his passing. Jimmy Carter then made the single most unfortunate nomination in Fed history. He was the only non-economist and served the shortest of all terms — fifteen months — before leaving the nation with its worst inflation rate in sixty years, racing upward through 10 percent annually.

Mercifully, George William Miller is lost to history. Carter then nominated Paul Volcker, who took a seat in August 1979 and sixty days later put interest rates and the economy through the windshield. He is admired today as a kind of folk hero for being courageous and turning the inflation fight. 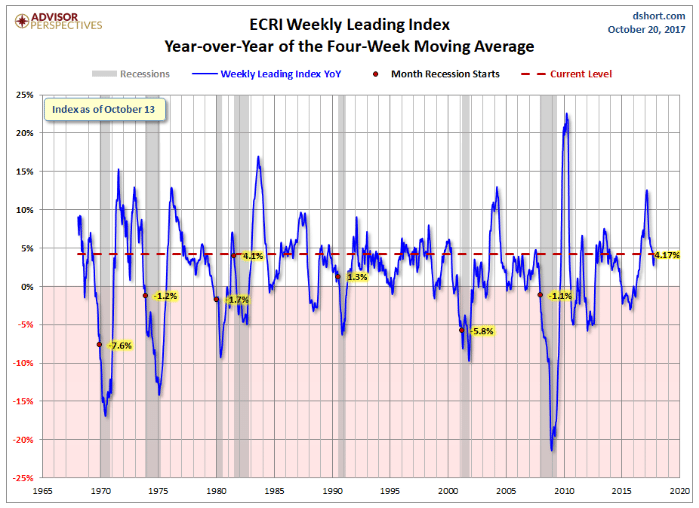 The ECRI via very different methodology confirms an economy doing just fine, and in no need of a tax cut.

However, any fool can throw millions of people out of work on purpose, get unemployment to 11 percent, mortgages to 18 percent and destroy the entire savings and loan (S&L) industry. Volcker’s sheer brutality has never been justified. Some of the best dark comedy in U.S. economic history is the story of Volcker in constant states of mutual misunderstanding with Carter and then Reagan (“Secrets Of The Temple,” Greider 1989, the best book on the Fed).

Volcker gave way (in grudging, small-minded temper) to Alan Greenspan in 1987. It is still hard to tell how much of the following thirteen years of good economy and falling inflation was due to his good management, and how much to good luck.

The Fed’s own view of “the great moderation” as its own genius is today completely discredited. The ancient Greeks knew well the consequences of Greenspan’s success and overpowering intellect: pride, excessive pride, then disaster (ate, hubris, nemesis). The Fed still can’t discuss in public its responsibility for the uncontained stock bubble (1998-2000) to the greatest credit disaster of all time (by 2008).

Given that history, why even have a Fed (as many on the right would like)? Why care who the chair will be? Why not just have some rules for the Fed and stick to them? Because without a Fed — mistakes and all — events would have been greatly worse. Because neither the public, Congress, nor the president can be trusted with money.

Mr. Trump is neither greatly more ignorant nor knowledgeable about monetary policy and its limits than his predecessors. He wants a faster economy, and so did they. And he knows that if his nominee crashes the ship it will be his own fault, not the nominee’s.

The Fed, rates and money politics: The week in markets