As anticipated, the hurricanes have turned the usual flow of economic data into a game of pick-up sticks, a meaningless tangle. The market reaction has been to ignore the new data, assume the economy is on-trend, and focus on other stuff that may be trend-changers.

As anticipated, the hurricanes have turned the usual flow of economic data into a game of pick-up sticks, a meaningless tangle. The market reaction has been to ignore the new data, assume the economy is on-trend, and focus on other stuff that may be trend-changers.

The Fed is in play in two parts: what it will do and who will do it. 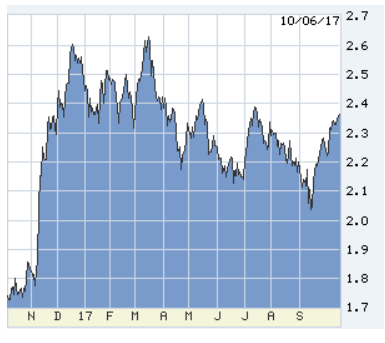 The US 10-year T-note is technically edgy. Take out 2.40% going up, and we’ll try the post-election tops.

The consensus now: in December the Fed will lift the overnight cost of money from 1.25 percent to 1.50 percent, and that move is largely built into mortgage and other market rates. However, we are nearing the end of the period in which the Fed could hike and long-term rates could stay put. The 10-year Treasury (T) note has been hanging on to a key level all week — 2.35 percent — which is too low relative to the Fed funds rate to survive another hike. Mortgages are now back just above 4.00 percent, and brace thyself. 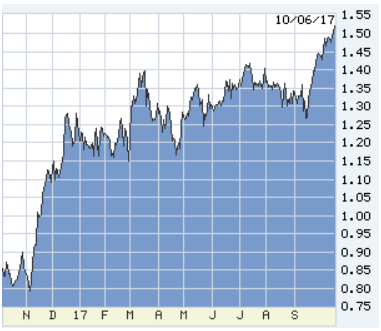 The Fed-predicting 2-year T-note is all set for a December hike.

The Fed’s future actions will be confined by events, no matter who is in the Chair. The Fed’s primary forecasting tool — employment and wages versus inflation — is busted, but they have other tools and concerns. One long-running one: the immense heap of cash created by global central banks may not produce traditional wage-based inflation, but could cause asset bubbles. 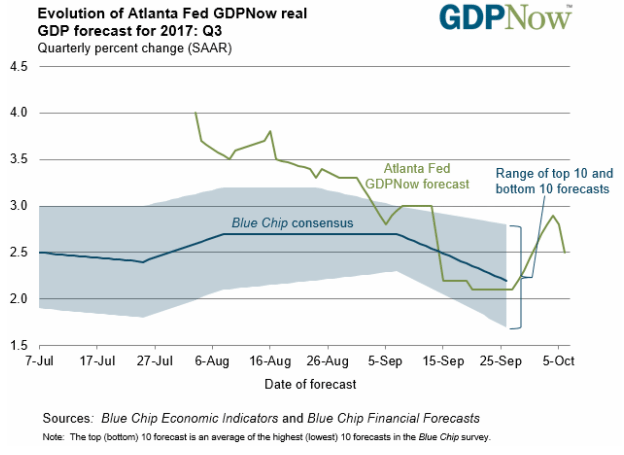 GDP accounts will suffer from hurricanes, too, but not so much as the granular data. Running 2%-plus is on the hot side for the Fed, no matter what the 3%ers are dreaming.

Asset bubbles are notoriously difficult to see coming. The most traditional one is the easiest to see coming, and the one the Fed most-commonly punishes: housing. Except for apartment construction in some markets, there is no sign of a housing bubble — which perversely complicates the Fed’s chore. If the Fed raises rates for some non-housing reason, it could easily crater the non-bubble housing market.

What of other assets, stocks primarily? Begin with the obvious: nobody knows where stock prices “should” be, especially in a globalizing economy during an IT revolution. But the persistent buoyancy in stocks is anxious-making. This week alone, we’ve seen new all-time highs: Broad indices are up 1 percent against a news backdrop that should have hurt stocks. Some would argue that stock buyers are anticipating good things from tax cuts and reform, and some people will believe anything. 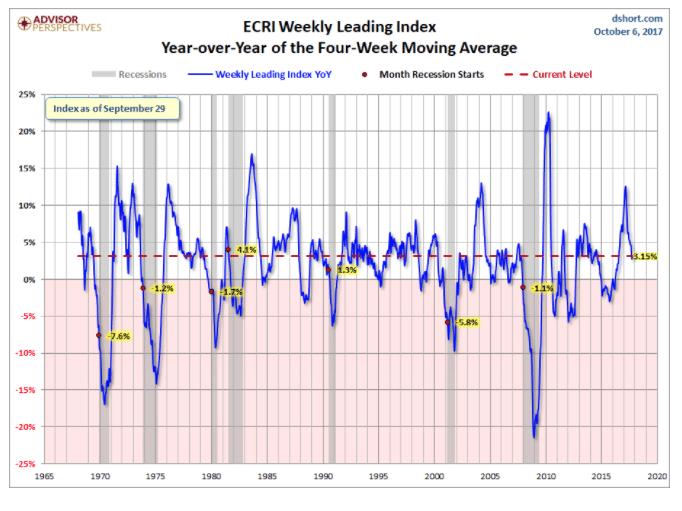 The ECRI concurs with the Atlanta Fed: good, solid growth.

One good indicator of a bubble nearby is a rising market for a new fairy tale.

For example, the 2004 belief that mortgage borrowers with no down payment and no proof of income or assets would perform on their loans. A comparable hallucination today is the growing market for cryptocurrencies. Bitcoin may have some ultimate utility because of its system of transaction settlement. But the new and fast-growing crypto subset is the “ICO.” An ICO is an initial currency offering by a new and inevitably technology startup company, and the nouveau substitute for an IPO, an initial public offering of stock.

$1.3 billion has been raised in the last 90 days, a 50 percent increase above the sum in the prior six months. Hyperbolic growth seldom has a happy ending.

In the last 90 days, 105 of these: you give us your dollars, and we give you Tezos, or TenX, or PressOne at a value which we assert and control, and of course predicated on our startup success. China and Korea have forbidden trading in these flights of imagination.

ECB (Europen Central Bank) board member Novotny this week: the hype around digital currencies like bitcoin is “dangerous and deeply dubious.”

Money of all kinds rests on faith. Even faith in gold was flawed, because gold-based economies fell in suicidal dominoes over and over again. But unregulated phony-money as a substitute for poor-idea stock offerings… you can bet the Fed is disturbed there is so much cash floating around that investors are lighting cigars with it.