They would raise the price of everything from canned beer and soda to automobiles and housing, not least of all skyscrapers and multifamily buildings deeply reliant on heavy metals, housing experts told Inman.

Following pledges made during his 2016 campaign and again as president, Donald Trump on Thursday announced a long-promised initiative to impose stiff tariffs on imports of aluminum and steel to the U.S., an aggressive policy stance that instantly sent the Dow tumbling 500 points while causing construction leaders and housing analysts to brace for the worst.

Short on details and far from a done deal, the trade measure as outlined on Thursday would impose tariffs of 25 percent on steel and 10 percent on aluminum, raising the price of everything from canned beer and soda to automobiles and housing, not least of all skyscrapers and multifamily buildings deeply reliant on heavy metals, housing experts told Inman.

“We’ve had a string of bad news for the housing market in just the past few months, and this is layering on top of that,” said Daren Blomquist, a senior vice president with the real estate data company Attom Data Solutions. “Along with the dip in new home sales and existing home sales in January, this is another sign that the days of the housing boom are numbered.”

As of Thursday afternoon, the steel-and-aluminum measures had not undergone a legal review, and, according to The New York Times, advisers were still sorting out details, including whether every foreign country would be subject to the tariffs or merely heavy hitters like China, which is among the world’s biggest producers of cheaply manufactured steel.

Housing inventory, already at historic lows, continued its nearly three-year plunge last month, with the number of homes on the market falling 14.4 percent, the most dramatic year-over-year decline since the shortage began in mid-2015, according to a report earlier this month issued by Redfin. Rising construction costs aren’t likely to reverse that course, National Association of Realtors (NAR) Chief Economist Lawrence Yun told Inman News on Thursday, following the policy announcement.

A spokesman for The Durst Organization, the New York-based real estate developer with skyscrapers in Times Square, said steel and aluminum tariffs would directly impact the construction industry should they cause building materials to increase in price.

“If it causes those materials to go up in price, it will increase construction costs and hurt the construction industry,” said Jordan Barowitz, the spokesperson for The Durst Organization.

Trump himself opted for Chinese steel in two out of three of his past development projects as president of The Trump Organization, depriving steel manufacturers in Pennsylvania, Ohio, Michigan and Wisconsin of million of dollars, according to a 2016 Newsweek expose. He also used Chinese aluminum, depriving manufacturers in Ohio, Texas and West Virginia.

However, one could argue that was because he got a better deal on that imported metal, and as president, Trump is now looking to close the loophole he took advantage of as a developer.

“We’ll be signing it next week,” Trump said on Thursday. “And you’ll have protection for a long time in a while. You’ll have to regrow your industries, that’s all I’m asking. What’s been allowed to go on for decades is disgraceful. It’s disgraceful. When it comes to a time where our country can’t make aluminum and steel … you almost don’t have much of a country.”

Following news of the tariffs, the Dow closed down 400 points. The Standard & Poor’s index of 500 stocks plummeted 1.3 percent and the Nasdaq was down 1.3 percent by Thursday afternoon.

Editor’s note: This story has been updated to correct the spelling of Lawrence Yun’s last name.

Does healthy economic growth lie ahead? 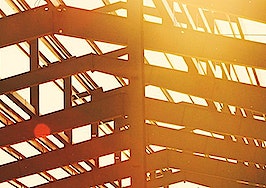 Construction is still rising, but where are the workers?