The U.S. Department of Housing and Urban Development, the 53-year-old agency founded three years prior to the Fair Housing Act as part of the landmark Great Society program designed to eliminate racial injustice, is considering omitting the words “free from discrimination” from its mission statement.

Under the direction of Secretary Ben Carson, the U.S. Department of Housing and Urban Development, the 53-year-old agency founded three years prior to the Fair Housing Act as part of the landmark Great Society program designed to eliminate racial injustice, is considering omitting the words “free from discrimination” from its current 63-word mission statement, according to news reports.

The new mission statement, whittled down to just 23 words, emphasizes “self-sufficiency” and removes the words “free from discrimination,” a symbolic assault to the agency’s original aim that has prompted the National Association of Realtors, real estate tech giant Zillow and housing advocates to denounce the change.

“With over 4 million instances of housing discrimination still occurring each year according to the National Fair Housing Alliance, it’s clear more work needs to be done and HUD’s plan to remove important anti-discrimination language from their mission statement takes us in the wrong direction,” said Amy Bohutinsky, chief operating officer of Zillow Group in a prepared statement delivered to Inman News on Thursday. “Fair housing doesn’t happen by itself. We all have a role to play to ensure our communities are inclusive and diverse.”

HUD’s plan to remove anti-discrimination language from their mission statement takes us in the wrong direction. With 4 million instances of housing discrimination still occurring each year according to @Natfairhouse, it’s pretty clear more work needs to be done, not less. 1/2

The new mission statement, as first reported by HuffPost, now reads simply: “HUD’s mission is to ensure Americans have access to fair, affordable housing and opportunities to achieve self-sufficiency, thereby strengthening our communities and nation,” according to a memo addressed to HUD political staff on March 5. Compare that to its former mission statement, which is still up on HUD’s website and reads:

HUD’s mission is to create strong, sustainable, inclusive communities and quality affordable homes for all. HUD is working to strengthen the housing market to bolster the economy and protect consumers; meet the need for quality affordable rental homes; utilize housing as a platform for improving quality of life; build inclusive and sustainable communities free from discrimination, and transform the way HUD does business.

A spokesman for HUD characterized the rewritten mission statement as a work in progress months in the making and reasserted the agency’s commitment to anti-discrimination policies. The HUD mission statement has been modified in the past, in 2003 under George W. Bush and in 2010 under Barack Obama.

“As in previous Administrations, HUD is considering modest changes to the Department’s mission statement to make it a more clear and concise expression of the historic work this agency performs on behalf of the American people,” Raffi Williams, a spokesman for HUD, said in a statement.

“You can be sure of one thing — any mission statement for this Department will embody the principle of fairness as a central element of everything that we do,” Williams added. “HUD has been, is now, and will always be committed to ensuring inclusive housing, free from discrimination for all Americans.”

The National Association of Realtors (NAR) regularly works with HUD on various housing finance issues and in 1996 both organizations adopted the Fair Housing Partnership an effort to jointly address discrimination. For NAR, HUD’s omission of anti-discrimination language is raising red flags.

“As Realtors join with our industry partners, allies and consumers throughout 2018 to commemorate the 50th anniversary of the Fair Housing Act, we believe that fair housing for all should remain a core part of HUD’s mission,” said NAR President Elizabeth Mendenhall in a statement. “The Fair Housing Act provides that HUD will enforce the Act and administer its programs and activities in a manner that affirmatively furthers fair housing. When President Lyndon B. Johnson signed the Fair Housing Act into law, he exclaimed that fair housing for all — all human beings who live in this country — is now part of the American way of life.

“Not only is Fair Housing integral to the ethical commitment of our members, as outlined in the Realtor Code of Ethics, it is critical to our ability to serve our customers, clients and the community,” Mendenhall added. “We look forward to continuing our work with HUD to advocate for inclusive sustainable communities free from discrimination.” 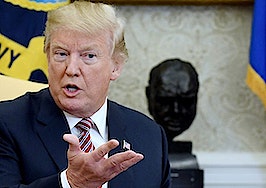