Brian A. Jackson on Shutterstock.com
by Patrick Kearns
Share this article
You successfully shared the article.
Close

A South Florida real estate agent is suing the National Association of Realtors and News Corp. subsidiary Move Inc. for sending her unsolicited text messages through realtor.com after she opted out of receiving the alerts.

A South Florida real estate agent is suing the National Association of Realtors (NAR) and News Corp. subsidiary Move Inc. for sending her unsolicited text messages through realtor.com, after she opted out of receiving the alerts.

The lawsuit seeks class-action status and was filed in U.S. District Court, Southern District of Florida, Fort Lauderdale Division on September 17. The complaint alleges that, “in their persistent efforts to advertise and solicit business, defendants, acting in concert or on each other’s behalf, engaged in systematic text-message-advertising campaigns, without regard for the law or the privacy rights of others.”

In the complaint, photos show multiple instances where realtor.com would send text messages and Silverman would reply, “Stop.” Each time, the automated text message would tell her she was unsubscribed. Still, she would receive another text message the following day, sometimes twice a day. In total, Shaw estimates that his client received over 200 text messages, although they have to subpoena phone records to find the exact number, as part of the lawsuit. 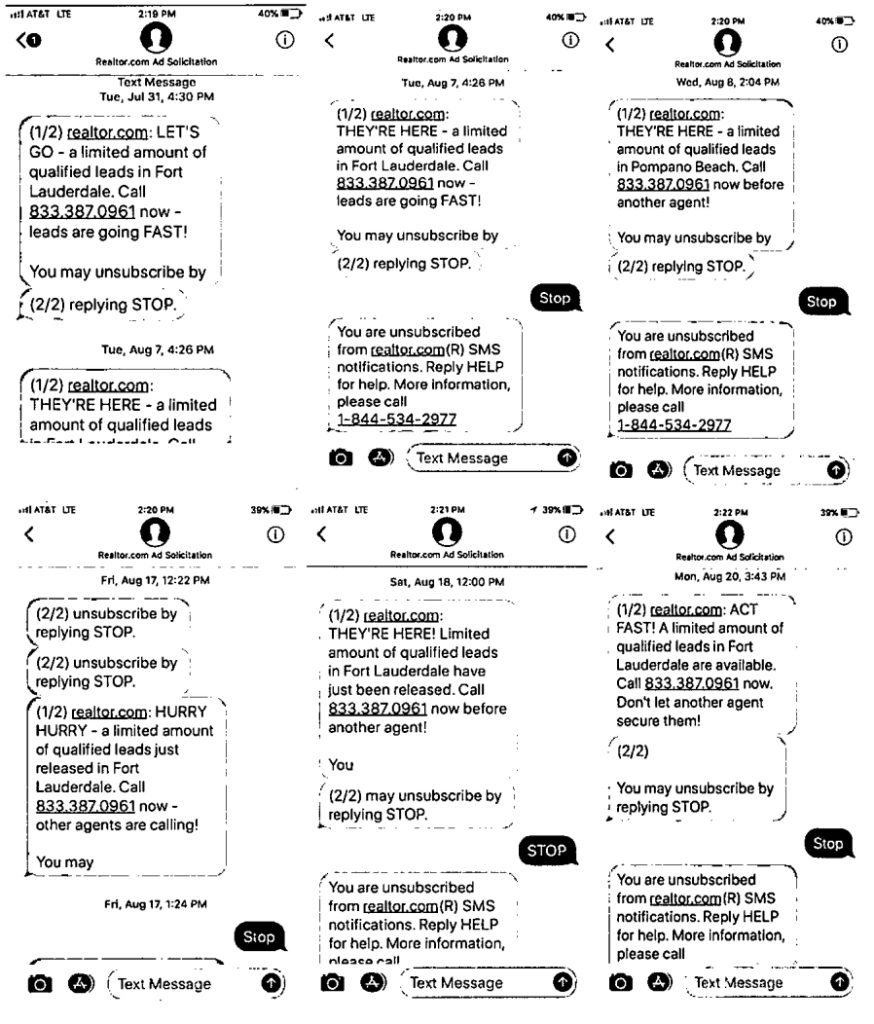 “My brother is a real estate agent as well and a lot of the business is done over texts and cell phone calls,” Shaw said. “So to be consistently receiving solicitation text messages every single day is disruptive.”

Silverman, a member of NAR since 2003, told Inman she spent $1,500 a month advertising on realtor.com in 2006 and 2007, but is no longer a customer of the real estate listing portal’s lead generation advertising program.

The lawsuit alleges that Move and NAR violated the Telephone Protection Consumer Act (TCPA), which regulates and restricts the use of automatic telephone dialing or texting systems (ATDS) to protect against harassing invasions of privacy, according to the complaint.

“Defendants bear the burden of showing that it had Plaintiff’s prior express written consent when sending her the text messages, and must show that Plaintiff and the Class did not revoke consent or opt-out of receiving text messages,” the complaint continues.

Shaw explained that Silverman decided to file the lawsuit as a class action to help others possibly in the same predicament. The complaint alleges “Defendants’ illegal conduct” has disrupted “the daily lives of hundreds or thousands of Florida residents.”

“She could have filed this as an individual suit — we would have had a great individual suit — but she was legitimately frustrated so she wanted to help out and put a stop to this for everybody in South Florida who is receiving these harassing text messages,” Shaw said.

Move Inc. is no stranger to lawsuits filed over the realtor.com platform, which it operates. In April 2018, two real estate agents sued Move, alleging the company has defrauded thousands of agents by failing to deliver the number of viable leads from realtor.com it promises.

In January, a former employee sued Move, alleging the company defrauded its agent clients by charging them for services they never ordered or received, and of billing their credit cards without authorization.

NAR owns the realtor.com domain but it is operated by Move Inc., which was acquired by News Corp. in 2014. NAR and Move declined to comment for this story, citing pending litigation.