The Federal Reserve has raised short-term interest rates three times this year, causing mortgage rates to climb to over 5 percent currently, some of the highest levels seen in nearly a decade. As a result, the cost of borrowing has risen — putting an even greater strain on buyers who are already dealing with record-high home prices.

According to Zillow’s latest report, the hike in rates has led the monthly mortgage payment for a median-priced home to increase 15.6 percent since Aug. 2017, which breaks down to an extra $118 per month or $1,416 per year. The crunch isn’t expected to stop anytime soon, as five more hikes are expected to happen by the end of 2019. 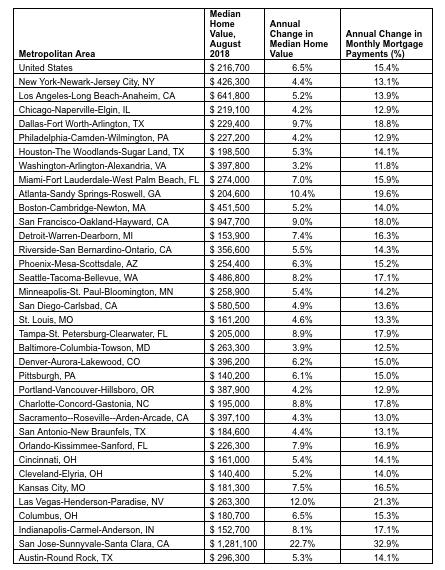 Zillow Senior Economist Aaron Terrazas says a one percentage point increase in mortgage rates, which is the norm during Fed rate-hiking cycles, will result in $1,200 more per year in mortgage payments for the typical U.S. home, even if home prices remain flat.

Looking forward, Terrazas says the uptick in mortgage rates have canceled out any relief buyers could have experienced from home value growth slowing to 6.5 percent year-over-year.

“For most of the current economic expansion, mortgage rates have remained just off historic lows even as the American economy has accelerated,” he said in the report released on Tuesday. “We’re finally starting to see typical patterns asserting themselves in the housing market, and conditions are returning to more of what we would expect in a normal economy.”

But, Terrazas says there is a silver lining for buyers who can handle higher borrowing costs, especially those who live in the home price hot spots.

“Home buyers and sellers have become accustomed to low rates, and there will be a bit of an adjustment period as the market adapts,” he added. “Looking ahead, the impact of higher rates may slow the pace of home value growth, particularly in the nation’s priciest markets. Buyers will face higher financing costs, but also could benefit from somewhat less frenetic competition.”

Zillow’s calculations are based on the August median home value of $216,700, and the current quoted mortgage rate of 4.7 percent on Zillow Mortgages as of October 12, 2018.