Ivan Diaz on Unsplash
by Lew Sichelman
Share this article
You successfully shared the article.
Close

“The economic backdrop is quite favorable,” the group’s chief economist, Mike Fratantoni, told reporters at the MBA’s annual mid-October convention in Washington.

Fratantoni’s forecast is that loan costs will peak at 5.1 percent by next year’s second quarter and remain at that level for the foreseeable future, at least through 2021. According to Freddie Mac, rates now average 4.9 percent, so if he’s on target, the recent run up has just about run its course.

The economist thinks the Federal Reserve Board will boost the short-term federal funds rate one more time this year and three times next year. But he is betting that long terms rates — i.e., the 30-year fixed rate mortgage — won’t rise too much higher.

“Actually, the Fed is still actively trying to stimulate the economy,” he said. But in an effort to keep inflation at bay, he added, the central bank “may shift from neutral into slow-down mode. But I don’t think long-term rates will move nearly as much.”

Driving these gains is a more sustainable rate of job growth, wage growth that is trending higher and a generation of young adults that is “just now hitting their peak homebuying years,” he told the group.

His big worry: That the spread between BBB corporate bonds and the 10-year Treasury yield will increase. “We don’t need much of a jump in credit spreads” for the economy to wobble into recession, he warned. “Housing won’t cause a recession but this might.”

“We need only 100,000 (new jobs a month) to keep going on an even keel,” he pointed out. But he also noted that job openings are at “a record high of 7.1 million,” largely because businesses can’t find the trained workers they need.

The unemployment rate, meanwhile, is at the lowest point since 1969. And the economist expects it to fall a bit further, from 3.9 percent so far this year to 3.5 percent next year.

Moreover, millennials are “just at the edge” of reaching their prime home buying years — ages 25 to 40. Standing at the precipice are 47 million of them, the economist said, adding that they are “a tremendous support for housing demand.”

“Demand is there, mortgage rates will go up but not too much, the economy is strong and housing starts are gaining steam,” Fratantoni said. “This is what’s driving home buying.”

A few other key favorable trends the economist mentioned: 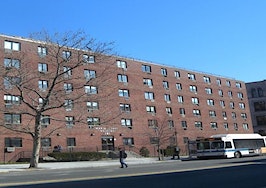