Real estate tycoon Robert Durst must stand trial over the murder of a close friend in the year 2000, a Los Angeles judge ruled Thursday.

Notorious real estate tycoon Robert Durst, who once uttered what could be interpreted as a murder confession on HBO, must stand trial over the death of a close friend back in 2000, a Los Angeles judge ruled Thursday.

The Jinx, 75-year-old Durst, who inherited millions in real estate holdings from his New York mogul father Seymour Durst, is accused of shooting his friend Susan Berman in the back of the head in her Los Angeles home back in 2000. The general suspicion, put forward by different prosecutors, is that Durst murdered Berman to keep her from talking about the disappearance of Durst’s spouse, Kathleen Durst, in 1982.

Berman stood by Durst’s side when he was suspected of having involvement in the disappearance of his wife, who has still never been found. 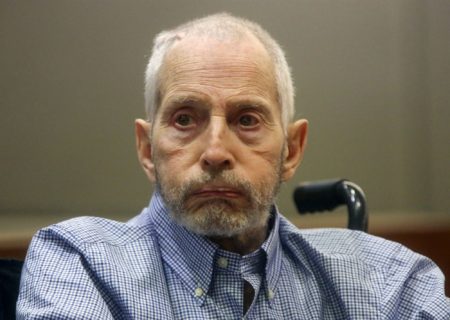 While Durst has denied killing either woman, Los Angeles County Superior Court Judge Mark Windham ruled that there is enough evidence to try him for murder, according to the Associated Press. He pleaded not guilty on charges related to Berman and was never charged in relation to his wife’s disappearance, though suspicion is what was explored on the HBO mini-docuseries.

In 2015, HBO released The Jinx, based on the events surrounding the deaths of Kathleen Durst, Berman and Texas neighbor Morris Black, who was killed in 2001.

Although Durst was arrested in the latter murder, and he “admitted that he had butchered his 71-year-old neighbor’s body with a bow saw and dumped the parts into Galveston Bay,” according to The New York Times, he was later acquitted by a jury in 2003.

Fully titled The Jinx: The Life and Deaths of Robert Durst, the series caused a scandal when Durst muttered what many interpreted as a confession in the final episode of the show.

“What the hell did I do?” Durst said in the final episode, most likely without realizing that his microphone was on as he was in the bathroom. “Killed them all, of course.”

Durst was arrested just before the final episode aired in March 2015.

He is currently in jail without bail and will appear in court for an arraignment on Nov. 8. He could potentially face the death penalty.