CEOs worldwide expect more regulation in the future, mostly in the realm of data privacy protection, environmental impact, unmanned aerial vehicles and autonomous vehicle technology, according to a new survey.

Home prices aren’t rising as fast as they used to, but could a recession be on the horizon?

It’s the top external concern of business leaders around the world for 2019, according to the “C-Suite Challenge 2019,” a global survey of CEOs and other executives from nonprofit business think tank The Conference Board.

That stands in contrast to last year’s version of the survey, when CEOs ranked a recession 19th among their concerns. Other external concerns on the list include: cyber security, currency volatility, rising interest rates, terrorism, Brexit, income inequality, uncertainty in corporate tax policies, and more.

The survey’s respondents include more than 800 CEOs and more than 600 other “C-suite” executives, mostly from the U.S., Europe and Asia. Respondents said attracting and retaining top talent was their main internal concern for this year — a worry that seemed driven by awareness of new disruptive technologies and business models. 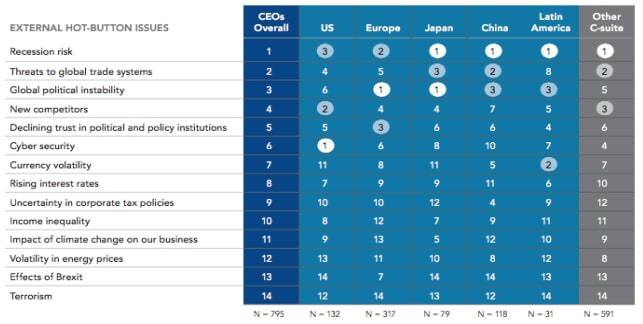 Source: The Conference Board

“While CEOs are quite anxious about the external challenges the global economy poses to their businesses right now, the survey results suggest they’re aware of the need to stay focused on the longer-term disruptive forces impacting their future go-to-market plans,” said Bart van Ark, a report author and chief economist of The Conference Board, in a statement.

“That awareness reinforces the need to continue the development of new business models, a strategy that will be tempting to neglect if and when the economy starts slowing.”

These executives are hardly the only ones concerned about a recession: Last year, a Zillow survey of economic experts had some respondents predicting a recession would hit the U.S. come 2020, but that the housing market would not be the catalyst. Other experts believe the housing market in particular will be strong through at least the early 2020s.

According to The Conference Board’s C-Suite Challenge 2019, threats to global trade systems, global political instability and new competitors were the second, third and fourth-most pressing external concerns of CEOs internationally.

In Europe and Japan, the top external concern for CEOs was global political instability (tied with recession risk in Japan), which ranked sixth among U.S. CEOs.

CEOs in every single geographic area named attracting and retaining top talent as their no. 1 internal concern for 2019.

“As global competition increases while the pool of available workers decreases, it comes as no surprise that executives cited talent as a top issue in 2019 that’s keeping them up at night,” said Rebecca Ray, a report author and The Conference Board’s executive vice president of human capital.

“Moreover, they think talent shortages will only intensify beyond 2019, which underscores why organizations should constantly reexamine how they’re attracting and retaining their best and brightest.” 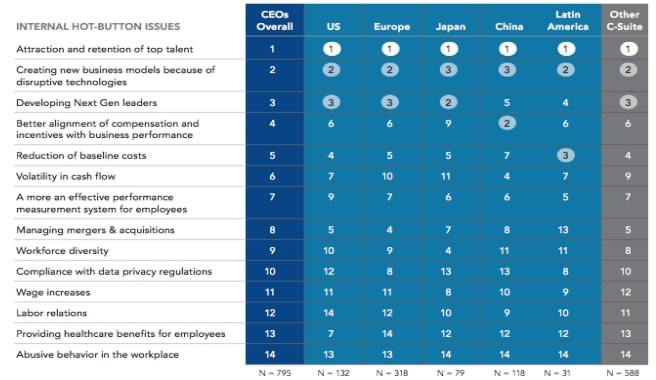 Source: The Conference Board

CEOs believe that exposing their potential leaders to different aspects of what the company does is important, but they may be overlooking a critical factor in leadership development by not including digital experiences in that education, according to the report.

“Less than one-third of CEOs globally rate this as one of their top three leadership development priorities and only about one in five in the U.S. do so,” the report said.

How CEOs plan to succeed in the future

CEOs around the world are “clearly” feeling anxiety around digital technologies, The Conference Board said.

But in general, CEOs seem confident about their companies being able to thrive in 2025, in part because they believe they have the right culture in place to succeed, according to the report. This is particularly true of U.S. CEOs.

CEOs worldwide recognize that customers are starting to put more value on the experience of using a company’s product or service rather than on the actual product or service, according to the report. Accordingly, two-thirds of CEO respondents said they would need to emphasize “servitization,” a term The Conference Board defined as “providing services and solutions that supplement traditional product offerings.”

“CEOs sense fundamental changes coming in the expectations and preferences of future customers,” said Chuck Mitchell, a report author and The Conference Board’s executive director of knowledge, content, and quality, in a statement.

“They see the importance of moving from a product-central approach to servitization to enhance the customer experience. This approach turns customers involved in one-time transactions into ‘users’ who seek continuous interaction with the firms they deal with.

“But that bar is high since they are now competing with the best experience a consumer has had with any company, regardless of product or service. It widens the field of competitors in unexpected ways.”

In general, CEOs see getting the right balance between long-term vision and short-term performance as the no. 1 hallmark of operational efficiency in the coming years, according to the report.

“As the economy starts slowing, the temptation will be to cut long-term investments to boost short-term results. If organizations pull back too much, they will be behind the curve when the economic downturn ends,” the report said. 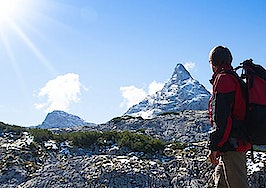 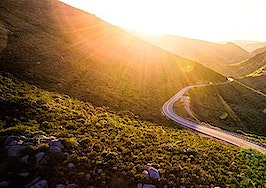 A real estate insider's guide to 2019