A shortfall in housing production is making homes ever more unaffordable for modest-income households, according to Harvard’s Joint Center for Housing Studies.

A shortfall in housing production is making homes ever more unaffordable for modest-income households and high land prices and regulatory constraints are to blame, according to an annual report from Harvard’s Joint Center for Housing Studies.

In its 2019 State of the Nation’s Housing report, the center found that households grew by 1.2 million per year between 2016 and 2018, close to healthy for the population’s size and age composition, likely due to a sound economy and rising incomes. 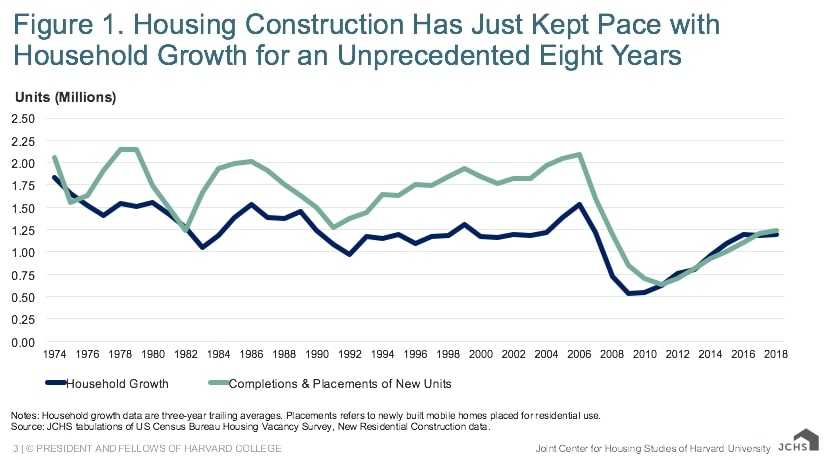 The report attributes the shortfall partially to builders wary of boosting the amount of housing supply too fast after the last boom and bust and partially to labor shortages as the number of native-born and foreign-born young men without college educations — the traditional labor pool for construction — declines.

But the most significant factors are rising land prices and regulatory constraints on development that have lead primarily to construction of higher-end homes, according to the report.

“The relative lack of smaller, more affordable new homes suggests that the rising costs of labor, land, and materials make it unprofitable to build for the middle market. By restricting the supply of land available for higher-density development, regulatory constraints and not-in-my-backyard (NIMBY) opposition may also add to the challenges of supplying more affordable types of housing,” the report said.

“Land costs rise when demand is strong and land use regulations limit the number of new units that can be built and/or impose significant costs on developers through fees and protracted approvals,” the report added.

The report’s authors pointed to some local strides: a consortium of businesses and philanthropic organizations in San Francisco, Partnership for the Bay, that plans to raise $540 million to fund affordable housing development; Microsoft’s $500 million program to build and preserve low- and middle-income housing in the Seattle area; Minneapolis abolishing single-family zoning; cities that have enabled the building of accessory dwelling units (ADUs). Google, Amazon and Wells Fargo have also announced their own affordable housing initiatives.

But the report’s authors pointed out that these programs are not without controversy. “While these efforts to expand the supply of affordable housing do not require public funding, their passage is often protracted and contentious, explaining in part why more localities do not make these types of regulatory changes,” the report said.

These efforts don’t come close to the scale of the problem, according to the report.

“If current housing supply trends persist, house prices and rents will continue to rise at a healthy clip, further limiting the housing options for many. To ensure that the market can produce homes that meet the diverse needs of the growing U.S. population, the public, private, and nonprofit sectors must address constraints on the development process,” the report said.

“And for the millions of families and individuals that struggle to find housing that fits their budgets, much greater public efforts will be necessary to close the gap between what they can afford and the cost of producing decent housing.” 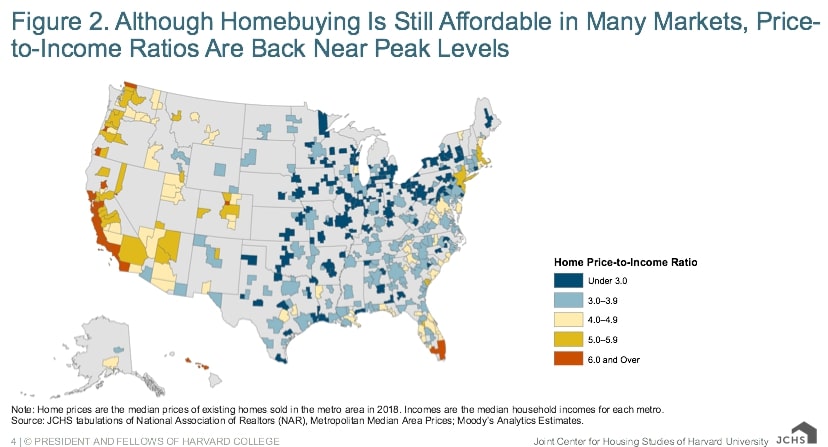 As homeownership increased in 2017 and 2018, the number of renter households fell, after rising the previous 12 years. But even as rental demand has weakened, the supply of low-cost units — those renting for under $800 — has dropped by 4 million between 2011 and 2017. Overall rents rose at a 3.6 annual rate in early 2019 — twice the rate of overall inflation, according to the report.

“The growing presence of higher-income renters has helped keep rental markets stable,” said Daniel McCue, a senior research associate at the Center, in a statement. “This has maintained demand for new apartments, even as overall rental demand has waned.”

The share of cost-burdened households — those paying more than 30 percent of their income for housing — fell for the seventh straight year in 2017 to 31.5 percent, but most of the drop was among homeowners whose cost-burdened rate declined to 22.5 percent. Nearly half of renters, 47.4 percent, remain cost-burdened.

“Public concern about a rental affordability crisis has increased in many areas of the country as cost burdens have moved up the income scale,” the report said. 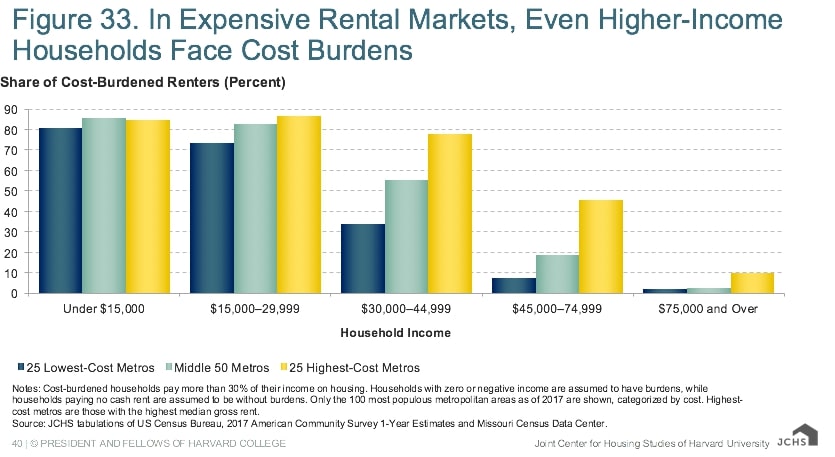 The report’s authors predict that millennials and baby boomers will continue to drive household growth and with it demand for rental units and starter homes. But a “big question is whether the market can supply housing that is within the financial reach of most households,” the report said.

To meet demand, “the supply of more affordable housing will have to increase significantly. But developers can only produce middle-market housing profitably if some of the restrictions on land use are relaxed and the construction sector is able to attract a larger labor force,” the report added. 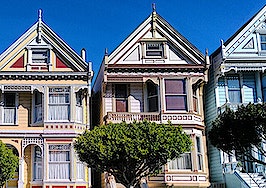