As bitterly-cold winters, record-breaking summer heat and stronger storms become the norm, many Americans are shifting their focus to climate change and how to solve it.

Homeowners have a unique stake in the climate change debate, as wily weather patterns caused by climate change are estimated to put $405B worth of housing stock at risk.

According to ValuePenguin’s recent survey of 1,000 Americans, 47 percent of homeowners are worried about having enough insurance to protect their homes from a climate change-induced natural disaster. However, homeowners are slow to make a change.

Forty-two percent of homeowners say they’re unwilling to pay higher insurance costs as the average monthly premium has risen to $1,083 — approximately 3.4 percent of a homeowner’s annual income. For homeowners willing to shell out more, only 18 percent said they’d tack an extra $500 to their bill.

ValuePenguin says homeowners unwillingness to voluntarily choose a more expensive insurance plan may be due to the fact they expect rates to rise on their own. A whopping 60 percent of homeowners said premiums will become more expensive over the next five years, especially in low-lying and coastal areas vulnerable to flooding and hurricanes. 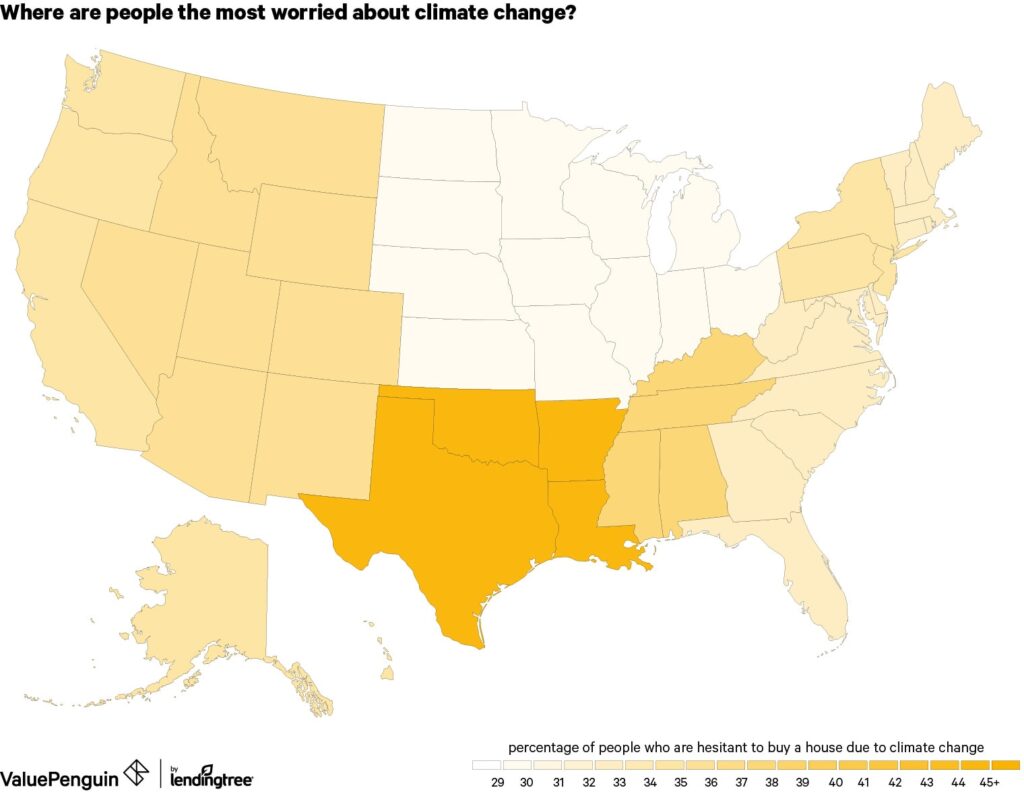 Where people are most worried about climate change.

For the 34 percent of renters who said climate change has impacted their purchasing plans, those in the south-central plains (Oklahoma, Texas, Arkansas, and Louisiana) expressed the greatest concern, with 44 percent saying climate change has made them think twice about buying.

Although the majority of those surveyed believed climate change is real, 41 percent admitted they were skeptical about climate change and its connection to weather patterns.

Sixty-three percent of skeptics said they don’t believe temperatures in their city will get any hotter over the next five years, although we’ve experienced five consecutive years of record-breaking heat.

Much like those who believe in climate change, the majority of skeptics haven’t invested in additional insurance to safeguard their homes.

“Generally, this data suggests there’s a sizable minority who are receptive to ties between climate change and global warming, but who don’t recognize that climate change has any effect on the severity of the weather,” the report concludes.