The trade war damage in the U.S. outside of manufacturing and farms has been undetectable.

The most-asked question of the week: “The Fed cut rates last week. Why are you telling me that mortgages have gone up from three-and-a-half to four-something?”

The stodgy answers below may deserve the newest and greatest generational put-down ever: “ok boomer.” If you are a baby boomer who has been living under a rock (to Millennials, the same thing,) you may have missed the viral ok boomer video.

No capital letters, “ok” not “OK” or “okay” (this is texting, dude) no comma after “ok,” as in proper grammar (make any point of grammar today and earn an “ok boomer” retort,) no quotation marks and no parentheses. “ok boomer” translates roughly as these old shutdowns, “If you say so” or “Whatever,” but those are personal, while “ok boomer” dismisses an entire generation and its so-tired superiority.

The excellent opening question requires a sequence of answers.

First, the Fed’s interest rate is the overnight cost of money. The Fed only twice in its 107-year history and during emergencies has controlled mortgage rates: from WWII to the Korean War, and after the Lehman disaster 2008-2013. Mortgage rates are long-term. Long-term investors think long term (ok boomer,) usually anticipating Fed moves, and at cycle turns typically move opposite to the Fed’ve moves.

What “cycle turn?” The Fed’s emergency easing began to reverse in 2015 with the Fed’s first hike from 0.25 percent to 0.50 percent. In December 2016, one more hike to 0.75 percent, mortgage rates rising also, from the all-time mortgage low below 3.50 percent. As the economy picked up in 2017, tax cuts and a doubled Federal deficit, three more hikes to 1.50 percent. In 2018, faster yet, four hikes to 2.50 percent and a terrible misunderstanding that the Fed intended to hike open-ended took mortgages to 5.25 percent and nearly cratered the economy.

As the Fed repaired communications, by spring both the 10-year and mortgages fell to 2.40 percent and 4.60 percent respectively, and the Fed had done nothing but change future expectations from death march to “patient.” By summer, anticipation grew that patience might last a long time and might involve a cut, so the yield on 10-year Treasury bonds fell to 2.00 percent and mortgages to 4.20 percent.

In the background, the real economy is subject to all sorts of non-Fed forces. Early in 2018, a trade war intensified and threatened the global economy, damage appearing overseas. On July 31 the Fed did cut a quarter-point, saying it was not a policy reversal, just taking out insurance, a “mid-course correction” as in 1998. ok boomer.

The trade war looms, but its impacts on the wider economy aren’t clear

The very next day came a new spasm of tariffs and threats from the White House, and long-term rates clunked down another half-percent in just two weeks, very close to the all-time lows of 2012 and 2016. The Fed’s overnight cost of money still sat at 2.25 percent, several at the Fed objecting to cuts and claiming the US economy was healthy. Over those objections the Fed has cut twice more since July, the second time last week.

Long-term rates bottomed on September 4 and again on October 4, and have jumped almost a half-percent since.

Why all of this bottoming and reversal? Because the trade war damage overseas has not been as bad as feared and is not intensifying, and long-term rates are rising there. The trade war damage in the US outside of manufacturing and farms has been undetectable. The Fed now says its correction is complete, policy “appropriate.”

But this week the worst-possible event for long-term rates unfolded: A trade deal and tariff roll-backs! When that thought appeared in China, our 10-year Treasury spiked to 1.97 percent, long-term rates went right back to July 31 pre-spasm. The markets were responding to a statement issued on Thursday by Gao Feng, a spokesman at the Chinese Commerce Ministry. He said: “If the phase-one deal is signed, China and the U.S. should remove the same proportion of tariffs simultaneously.”

Given the weakness in the White House it is surprising that more parties overseas have not tried to take advantage. The trade relaxation news this week is entirely from China and looks like a good try to move the White House.

Going deeper into trade war, or holding the damage as it is … that’s not compatible with election success next year and China knows it. Everything else out of China says its leaders have no intention to alter the worst of its behavior or make any significant deal with this president.

The president speaking beside his helicopter Friday morning appeared conflicted and not about to de-tariff. The odds of a deal big enough to improve the global economy are poor, and the odds are better that this week’s rate jump is overdone.

China, Japan, and Europe have dangerous difficulties that have nothing to do with tariffs. The US economy may be slowing of its own accord, the tax and spending stimulus is unwinding, and the still strong support for President Trump is reflective of the extremely unpleasant economic circumstances outside of urban areas.

Way too many people have agreed with the Fed that these three cuts since July resemble the Fed’s 1998 correction. I hope not. Those cuts were unnecessary, pumped more gas into the stock market bubble, forced the Fed to re-tighten quickly from 4.75 percent to 6.50 percent and to blow the bubble to smithereens, set off a recession, and contributed to the new era of persistent deflation.

That’s not what this looks like. Everyone is already concerned about the stock market altitude, flying on protracted low rates and Fed cash, but inflation is below target everywhere, and the benefits of IT and free trade are disruptive globally.

So, do what the Fed is doing: Enjoy the economic stability. Don’t fret about a rate spike from here, and watch the economy. And guess with them whether the next move is up or down.

The 10-year T-note in the last week. Guess which days the trade-deal news turned positive? 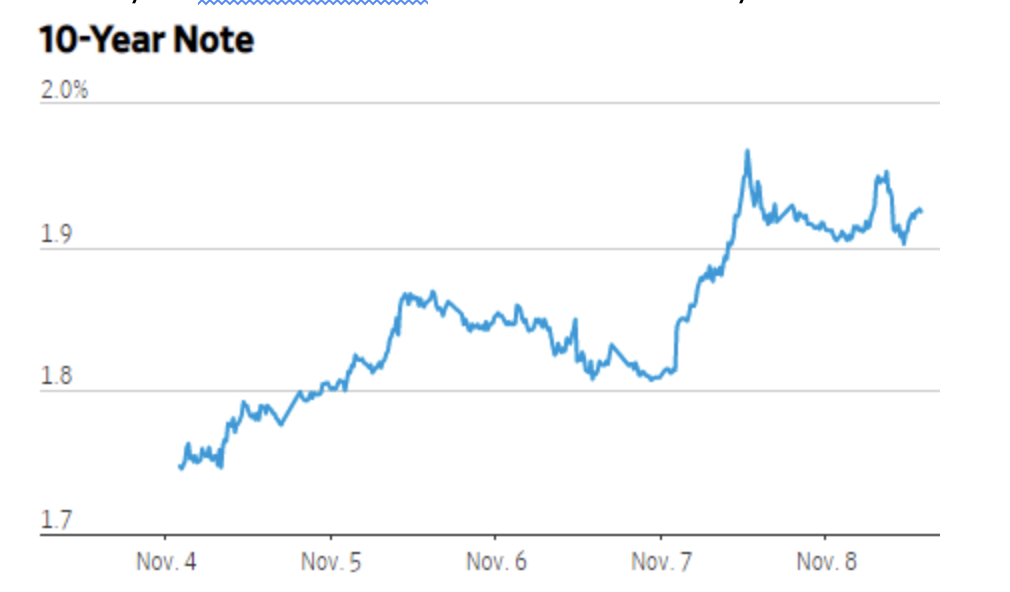 The 10-year in the last year, showing the progression described above: 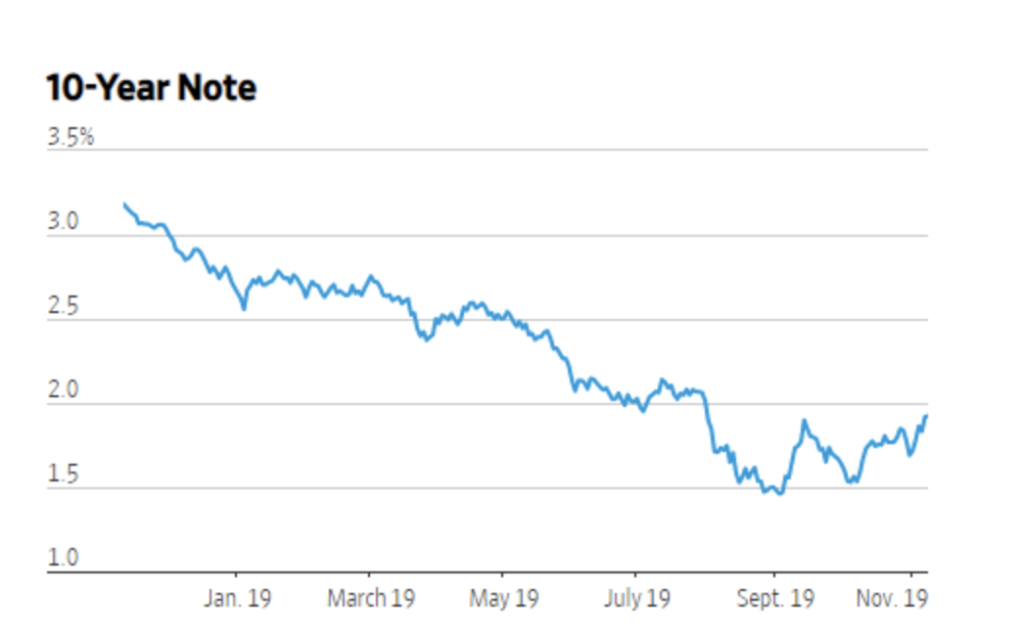 The Atlanta Fed GDP tracker has a weaker forecast than most, but has been the best. If it is correct, the Fed has not completed a correction. It has passed a cycle top and just begun to go down: 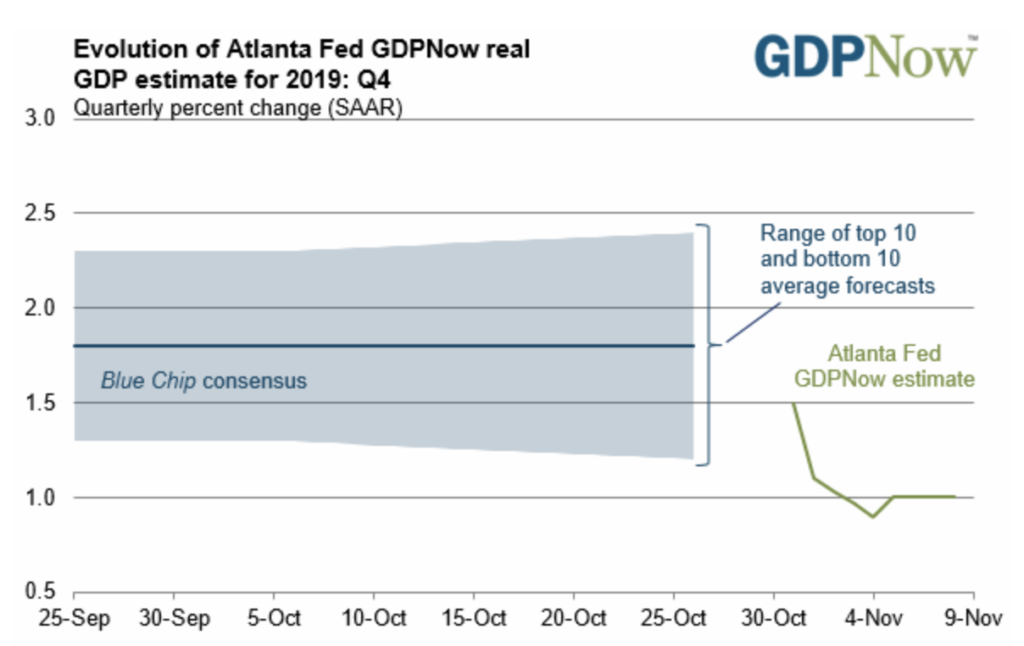 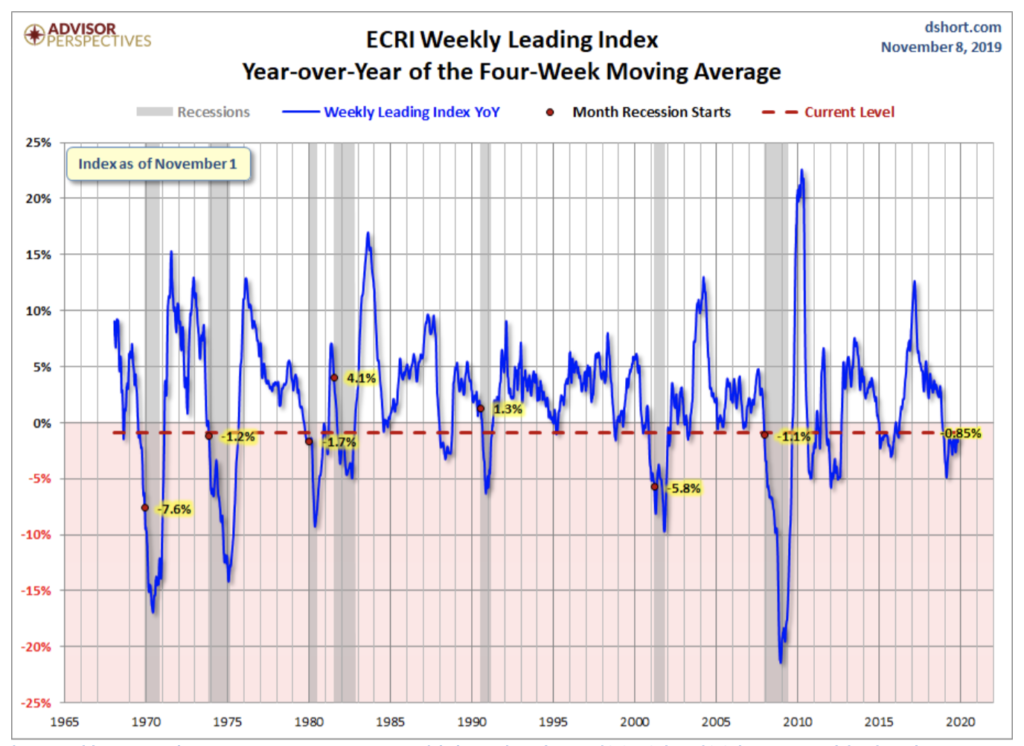