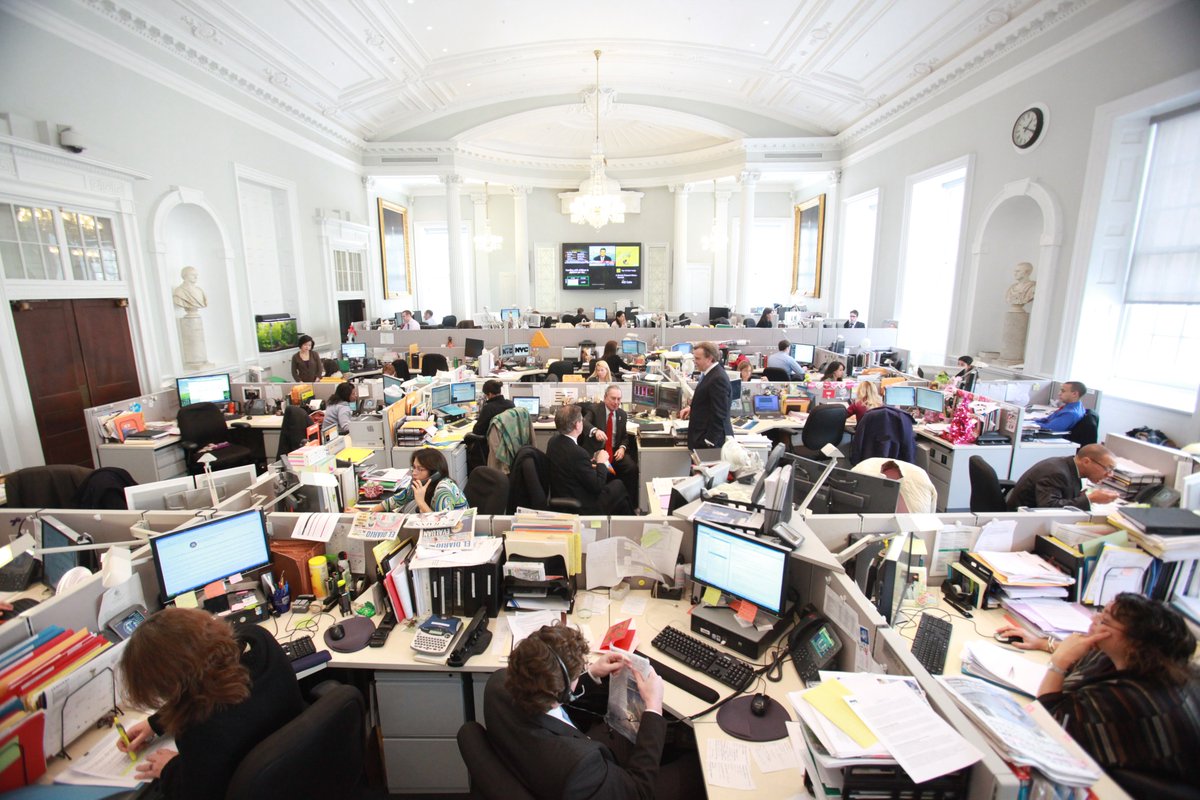 The 2020 presidential hopeful wants to transform the East Room into an open floor plan, but is it a good idea? Real estate agents are torn on the effectiveness of such offices.

In a tweet on Monday, Bloomberg announced that, if elected, he’d turn the East Room into “an open office plan” where he’d sit and work with his staff. The announcement is likely a sly jab at President Donald Trump, who reportedly doesn’t read daily briefs and frequently skips out on meetings.

Although reactions to the plan was mixed, the popularity of open office plans have exploded over the past decade with 68 percent of people reporting working in offices with “low or no walls.” Companies have adopted this layout in the hopes of fostering collaboration, boosting morale, and improving productivity.

As president, I’ll turn the East Room into an open office plan, where I’ll sit with our team.

I’ll use the Oval Office for some official functions – never for tweeting – but the rest of the time, I’ll be where a leader should be: with the team. https://t.co/zIU3ZL5uIv pic.twitter.com/jLwWKJCmxw

“The idea is to make the perfect engineering space: one giant room that fits thousands of people, all close enough to collaborate together,” Facebook CEO Mark Zuckerberg told Fast Company in 2015 of his decision to create the largest open floor plan in the world.

While aesthetically pleasing, research shows that open floor plans often do more harm than good. According to a Harvard University study published in 2018, these plans reduce face-to-face interactions and increase email usage.

“Overall, face-to-face time decreased by around 70 percent across the participating employees, on average, with email use increasing by between 22 percent and 50 percent (depending on the estimation method used),” the study read.

A handful of agents on Inman’s Coast to Coast Facebook page echoed the sentiments of Bloomberg’s social media followers and the Harvard researchers — open office floor plans are mostly a “no.”

“In my experience, most people in an open plan environment have a hard time minding their own business,” wrote real estate consultant Valerie Garcia. “This could be a pro or a con, depending on the situation.”

“Read the book Quiet,” she said. “Open offices can work great for extroverts but they create a large decrease in productivity for introverts.”

Lastly, agents Susan Mangigian and Sabrina Weld Feldman said these layouts can disadvantage agents with hearing issues and make it difficult to talk about confidential information.

“It’s hard to work in an open office when you’re talking about things that are confidential on a regular basis,” Feldman said.

So, what is the perfect office layout? According to productivity app developer Trello, there’s really no such thing.

As Trello productivity expert Kristine Spure explained, there are pros and cons to open and closed floor plans and the final decision should be based on company culture. (See, there’s still hope, Bloomberg!)

Furthermore, Spure said office layouts are only one part of creating a dynamic work environment.

“In truth, there is so much more to overall employee happiness and productivity than just office layout,” she said. “But instead of just thinking about layout, it’s more important to get creative with the design and ambience of the workplace.”

“It’s not just the space itself. It’s also got to do a lot with the feel of the space, or its place identity,” she added while suggesting companies incorporate artwork, plants, and consider offering open- and closed- layout options for teams.

4 simple ways to upgrade your office for the new year

Take stock! 4 tips for tying up loose ends before year-end

Does NAR's fair housing simulation work?
Back to top
Time is running out to secure your Connect Now tickets at the lowest price. Don't miss out on a chance to grow yourself and your business.Learn More×
Inmanpot
Up-to-the-minute news and interviews in your inbox, ticket discounts for Inman events and more
1-Step CheckoutPay with a credit card
By continuing, you agree to Inman’s Terms of Use and Privacy Policy.