Looking for a little clarity on this week’s news? Windermere Chief Economist Matthew Gardner digs into the numbers of the latest Home Purchase Sentiment Index. Consumer sentiment is good.

Hot off the presses is the latest Home Purchase Sentiment Index (HPSI) for September, and it has a lot of great information that I wanted to share with you.

Now, I know that I have covered this report before, but that was a few months ago, and things have certainly changed.

For those of you who might not be familiar with this report, the HPSI is a monthly survey that looks at how consumers view the current economy and how it might impact their housing decisions. It also gives some great insights as to how consumers feel about the future too.

Let’s get to the numbers. 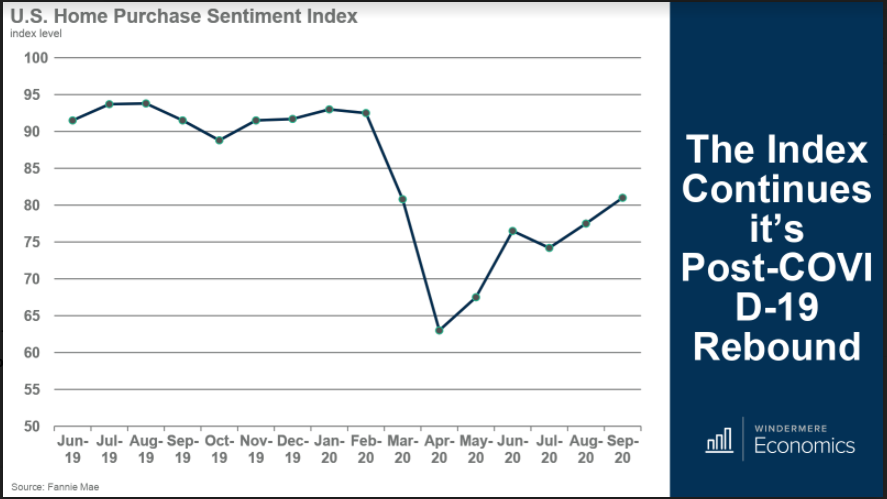 As you can see here, the overall index fell off a cliff in March — not a surprise at all as that was when the pandemic hit — but the recovery has been very impressive. Can you see the V?

There are several reasons the index has not bounced back fully as the data shows three of the index’s components rising, but three falling. Let’s go through them one at a time. 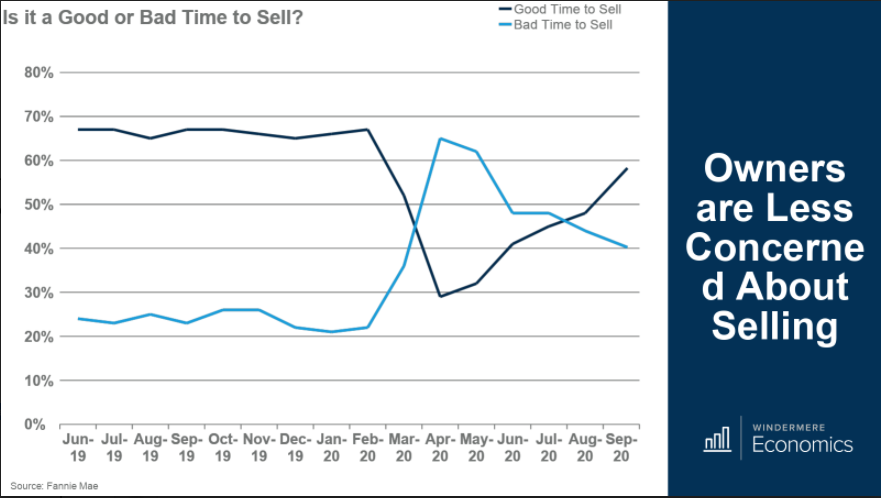 As I said, three of the components rose in September with consumers reporting a substantially more optimistic view of homeselling conditions, and as you can see here, the percentage of respondents who said that it is a good time to sell increased from 48 percent to 56 percent, while the percentage who said that it is a bad time to sell dropped from 44 percent to 38 percent.

And as a result, the net share of those who said that it’s a good time to sell rose by 14 percentage points, and it has been on the rise since April.

As all of you are likely seeing in your markets, there are far more buyers than sellers, and when you combine this with very favorable mortgage rates, it’s not at all surprising to see that sellers are feeling pretty good about themselves right now. 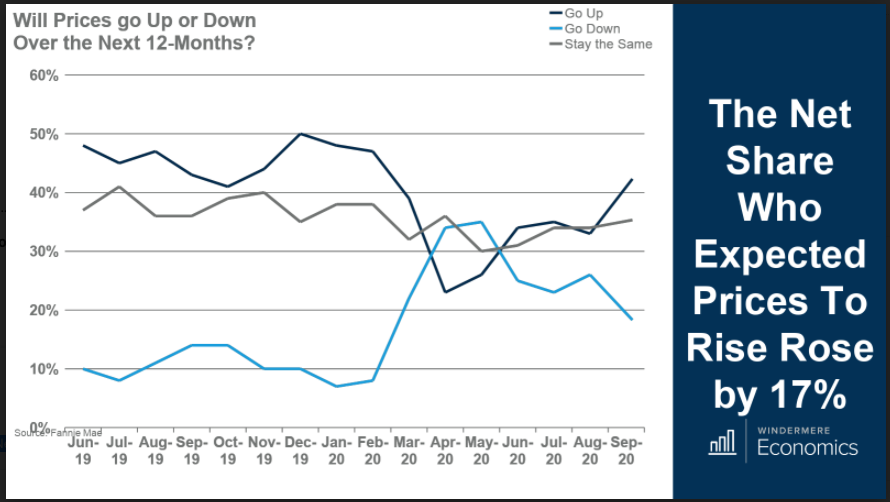 As a result, the net share who expected home prices to rise increased by a solid 17 percentage points.

And you can see in the chart, there were considerable concerns over home prices early in the spring, as the pandemic hit, but those have practically disappeared. Personally speaking, I fear that anyone still hoping for prices to drop will be sorely disappointed. 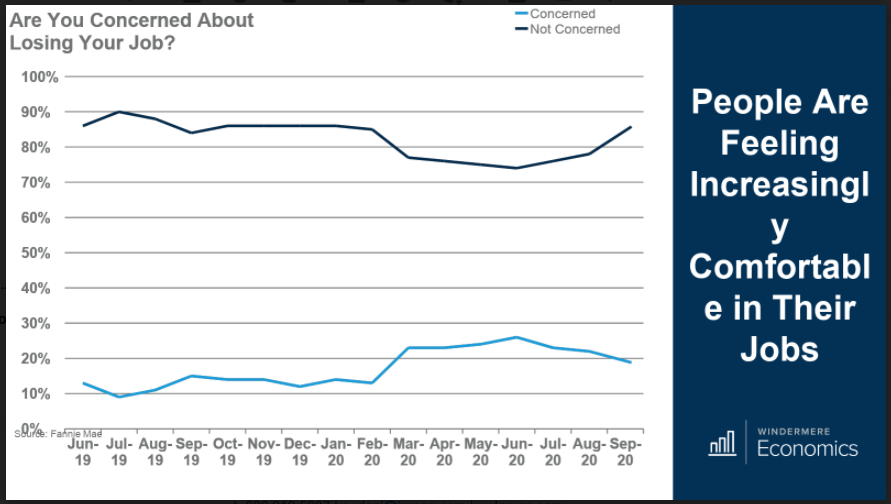 As a result, the net share who said that they are not concerned about losing their job rose by a significant 11 percentage points.

And this makes sense. The job market is certainly not near getting back to where it was back in February. Still, it is improving, and more importantly, it tells me that a majority of homeowners didn’t lose their jobs during the pandemic, and they are feeling pretty comfortable right now. 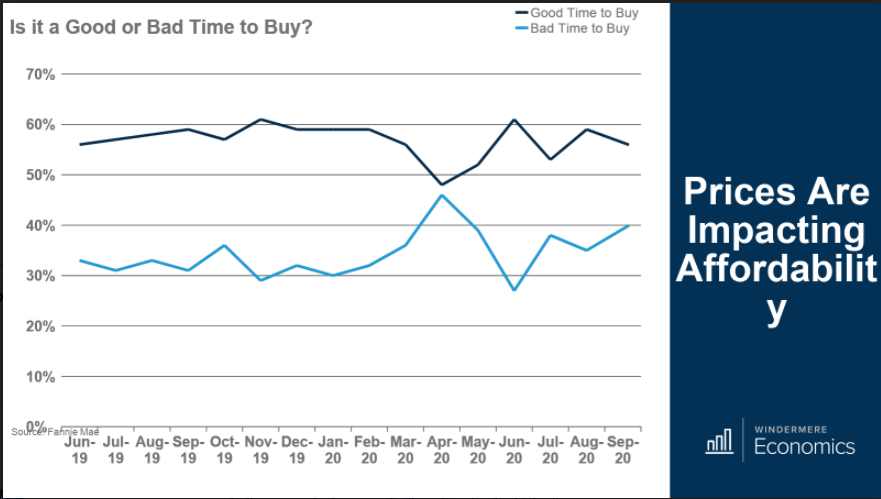 But there were also some negatives, with the last three questions evoking more pessimistic responses.

And I put this down to two things. Firstly, prices continue to increase, which is now hitting affordability, and it might well be discouraging some buyers. And secondly, concerns over mortgage rates. 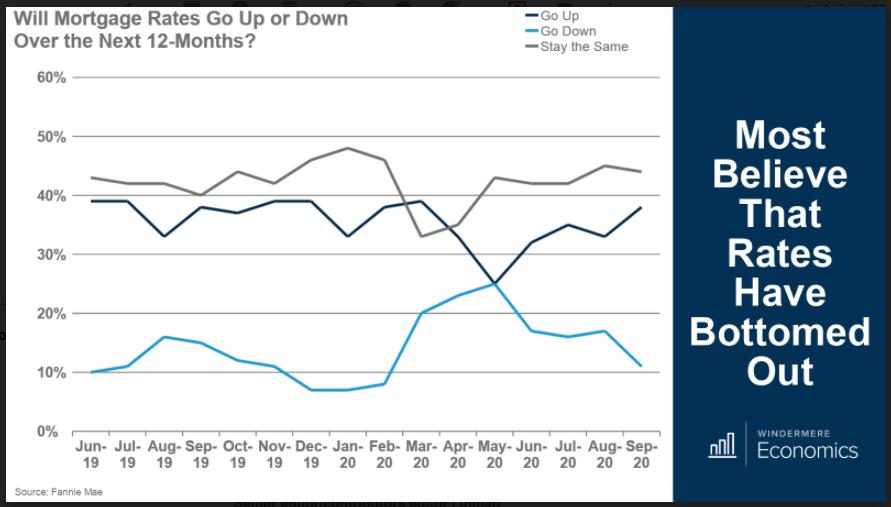 As a result, the net share who expected mortgage rates to go down over the next 12 months decreased by 11 percentage points.

And this is reasonable. Rates are, in my opinion, close to the lows that we will see. Others believe that too. 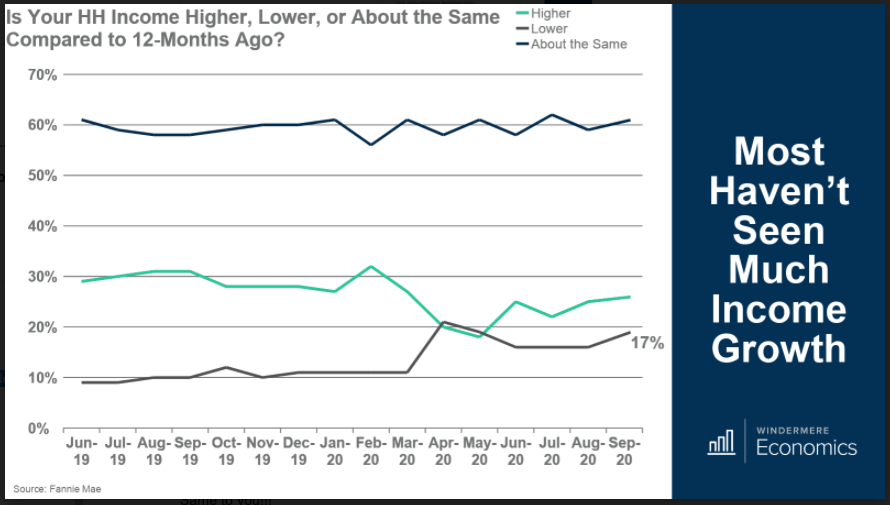 As a result, the net share of those who said that their household income is significantly higher than 12 months ago dropped by 2 percentage points.

Again, not too surprising given the current economic environment. That said, I expect to see it improve, but only when we see a vaccine for COVID-19, and there is more certainty about the direction the economy is taking.

The HPSI has recovered more than half of the early pandemic-period drop, which mirrors the vigorous homebuying activity that we have seen over the past few months.

Price expectations were up significantly in September. I believe that high sale prices are playing an increasingly important role in driving both the increase in “good time to sell” sentiment and the drop in “good time to buy” sentiment.

In the future, the wild card will be whether enough sellers enter the market to meet the strong homebuying demand that is in place.

There you have it. Consumers are generally feeling pretty good, and the numbers support my theory that housing is also in a pretty good place. However, there are headwinds given concerns about affordability and mortgage rates.

Beyond the headlines: Real estate remains a shining light