Brad Inman sat down with Florance to talk about CoStar’s business model, plans for Homesnap and a possible CoreLogic deal. By popular demand, we’ve transcribed the interview.

On Sunday, CoStar Group announced it had agreed to acquire Homesnap, the residential real estate search portal company, for $250 million.

Expected to close by the end of the year, the deal, which will put the company in direct competition with Zillow, is the brainchild of CEO Andy Florance, who over several decades has taken commercial real estate by storm and, in the years since, taken a systematic approach to the industry’s various segments.

On Tuesday, Inman founder Brad Inman sat down with Florance to talk about his early career, CoStar’s business model, plans for Homesnap and a possible CoreLogic deal.

Below, some of the highlights of the 40-minute conversation, edited for length and clarity.

Brad Inman: it occurred to me you’re a little like Jeff Bezos. In fact, you even started earlier than Jeff Bezos. He was from Wall Street; you got out of Princeton and that’s the very beginnings of CoStar, is that correct? I mean that was — you went right in to starting a company. Do I have the timeline right, Andy?

Andy Florance: You actually do, but actually I started working on the company while I was still in Princeton, so I literally — well, I was friends with Jeff Bezos at Princeton and I would work on physics with Jeff. And then I would go take some extra time in the evening to work on CoStar.

Inman: Oh, that’s great. So you’ve only had one job in your life.

Florance: I had a couple of college jobs. I was a laborer on a construction site. You know, I’ve been a bartender. I’m much better at doing digital real estate than I am at being a bartender. You know, I think I found my calling.

Florance: It’s interesting. I think one of the burdens CoStar Group carries is that we have purchased a successful, innovative, very small company doing $40 million in revenue, and when that happens, a lot of folks immediately start flipping ahead in the book from Chapter 1 to Chapter 20 and try to see where this book is going to end. And you really should read the whole book. You shouldn’t jump to the last chapters to see how it’s going to end.

So I think that people are proving they view the world the way Zillow views the world, and that we want to be in a business model similar to — or that we would envy where they are. And I think there’s some pretty fundamental differences in our vision of how we see the industry or how we see where it may progress over time.

Think about back in the days when I was starting out, many moons ago, and we selected the name CoStar. It had two meanings: One was a rather boring acronym, Commercial Office Space Tracking Analysis and Reporting. From that perspective, CoStar doesn’t work well anymore because we do office, industrial, retail, multifamily, hospitality, residential, farms and businesses.

Inman: Tell us about that, Andy. That seems like you’re saying — I mean there are good and bad agents. There’s top producing commercial, top producing residential. What is it about it that irritates you?

Florance: The business model strikes me as wrong. So if I go back to the offline world and I’m a residential Realtor and I’m excited that I’ve been selected to list a particular property, and I put my sign in the front yard and I’m glad that sign is there because it’s going to help me sell this home for this family, but also I’m very happy that sign is out there because other people in the neighborhood will see that I’m active in the neighborhood.

In the offline world, competing Realtors hammering their sign in the front yard of my client next to mine or obstructing my sign, that’s not appropriate behavior.

And when you move it and you do it in the online world, and you sell the ability to put your name next to other people’s listings, that’s not a positive consumer experience. I don’t believe it’s entirely — I don’t think it’s the right thing to do. And I also think it’s a bad consumer experience because the consumers get confused as to who actually has the listing. It actually takes money out of the pocket of people who actually have the listing. It just feels disingenuous.

Like your listing, your lead is fundamental. I don’t believe in it for a couple reasons: One, I think it’s the wrong thing to do. I don’t think it’s business behavior. Secondly, I don’t think it’s a smart revenue model. I think that we have been successful because we have provided value to the overwhelming majority of real estate firms that do work with us, and to try to be an important utility in the marketplace, but to clearly favor a teeny, teeny percentage of that industry. It’s just bad business.

On the Homesnap acquisition

Inman: Give me your vision around Homesnap and why you liked it versus buying a portal. What were the ingredients in Homesnap that got your attention. Give us a little insight — what is Andy Florance going to do to Homesnap to make it competitive with Zillow? We’ve heard you’re not going to gum up the listings with other ads. What else might we see coming out of you?

Florance: For one perspective, go back to the name of the company, CoStar. CoStarring in a transaction, with the agents starring in the transaction. Homesnap had the ethos of that. They were actually cooperating with the MLS as they’re providing value to the agents, that’s where we began. That’s our comfort zone, having agents using our platform and loving it or finding great utility. Yes, agents will always complain about paying even $10, but they love it and they keep using it.

Homesnap had outstanding software, great relationships with the industry. They respected the industry’s role in the infrastructure there. They had the ability to really see the opportunities to add value that no one else had seen, and realistically there’s no other company providing the kind of value that Homesnap is providing to their clients.

Going forward, I think our investors, analysts, media immediately presumed that CoStar wants to replace Zillow — and we don’t. We will never put other people’s — we will not create a billion dollar product putting other people’s names on the wrong listing.

Inman: Andy, do you think Zillow has its eye off the ball getting into these other business like iBuying and does that create an opportunity for you to jump in and do it the way you think it should be done?

Florance: Yeah, I always hope so. I have a very clear vision of what we want to do that is very different from what anyone else is doing right now. And so I believe that people have, you know, failed to leverage the potential of the internet to help selling agents and homeowners be able to sell their homes faster with greater certainty to allow agents to do more deals. And the use of the internet to focus on everything except for helping people sell homes more effectively has puzzled me.

That’s something that we have to do. We have to sort out what they want to have happen or where they want to go. It’s no secret the way it’s structured today there can be no revenue model for the broker-public portal, and so Wall Street or banks can’t invest in something in which you’re not allowed to make money. It’s a nonprofit.

Inman: I remember when Zillow bought Trulia, I wrote an article, checkmate, and I said it’s over — they’re going to own the consumer distribution and that was a big deal.  And when I saw the news about what you were doing, I thought huh, this is the first time we may unravel the chess match, but the piece that I found really intriguing and wrote about a month ago was CoreLogic.

I’m sure you can’t give us much color on that other than what we know in the public, but Core Logic, is that going to happen?  Are you still in the throws of that?  What can you tell us about it?  And for the readers, again, CoStar, it was reported was in the running to acquire CoreLogic.

Florance: Well, CoreLogic is an interesting company. Again, I’m familiar with CoreLogic because 30 years ago, 33 years ago, I wrote their first product. The product that sell today, I wrote as a 22-year-old.

Inman: Which product is that?

Florance: Well, the basic thing of searching for public records digitally, searching for recorded sales digitally online — I wrote the first version of that product. And the predecessor companies of CoreLogic, basically, approached to buy that technology from me when I was in my 20s. So I’m familiar with it. It’s still very similar to the way it was 30 years ago.

It’s a fascinating company. It obviously plays a very important utility role in a lot of aspects of both residential and commercial real estate and banking. There are a lot of things that a CoreLogic and a CoStar Group could do in combination. I think there are a lot of opportunities to evolve that CoreLogic business to provide more value to the marketplace.

We are always interested in these things. We obviously have acquired a lot of companies, dozens and dozens of companies, and this is a company where I’m very familiar with how they work. But none of these things are certain and there are lots of different people looking at CoreLogic.

I think you may have seen they had a special shareholder meeting in which [Cannae Holdings Chairman] Bill Foley knocked off three of CoreLogic’s board members. I think the chairman of CoreLogic retained his seat by 59 or 60 votes out of millions cast, so it’s good drama. It was great for Inman to write about.

Inman: Oh, yeah. Bill Foley is somebody that’s so successful in real estate, oddly enough people don’t know about him, but you know he’s tough. When I saw you two facing off I thought that’s an interesting bout.

Florance: Yes, so we’ll stay involved and we’ll watch how things develop, but there’s nothing there at this point. 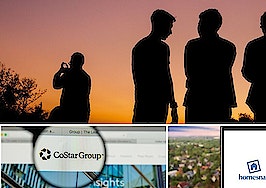 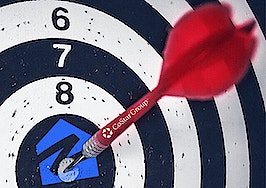