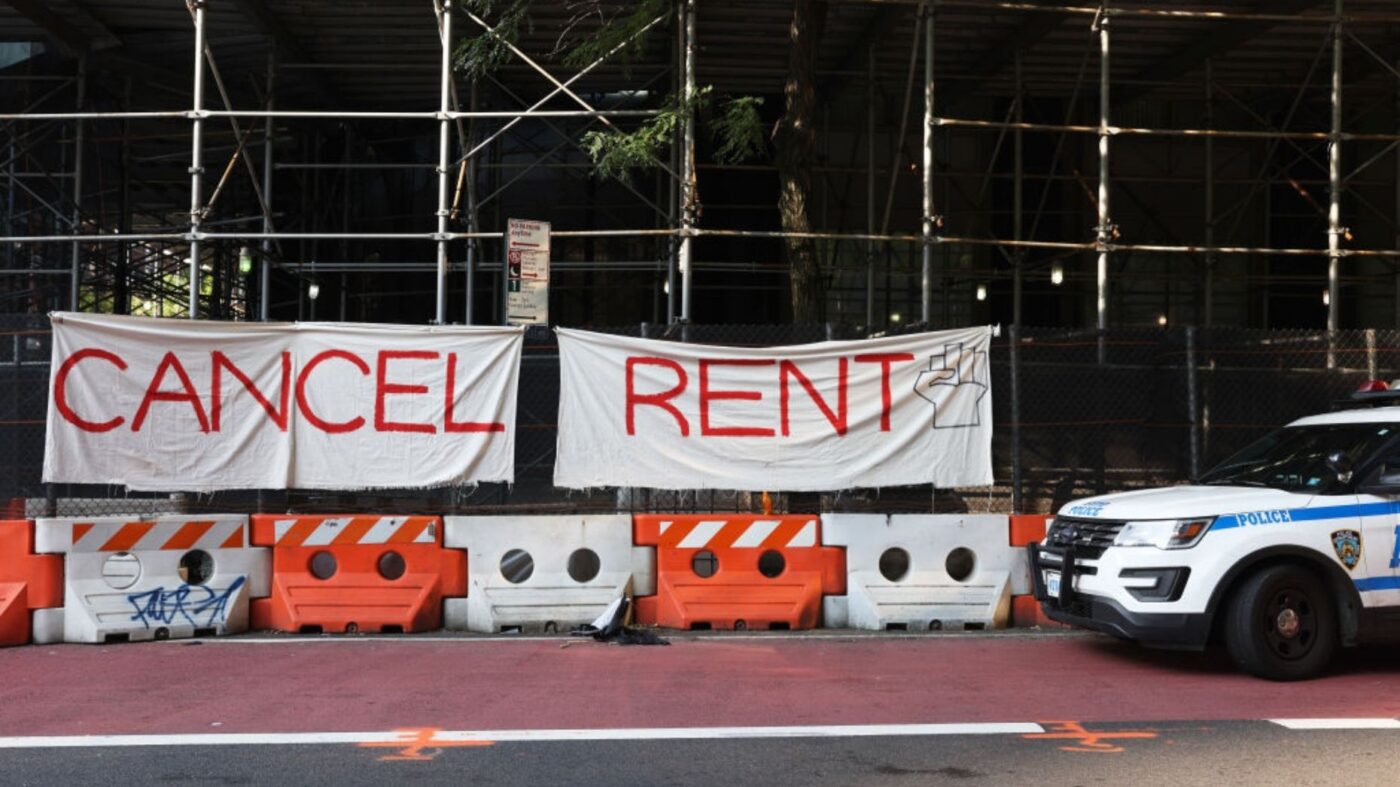 A “Cancel Rent” banner seen in New York in August

At the beginning of September, the Centers for Disease Control and Prevention (CDC) issued a nationwide ban on evictions through the end of 2020. While that ban has no doubt served as a lifeline for some people struggling with rent as a result of the pandemic, many others have had difficulty getting landlords and judges to interpret the moratorium in their favor.

On top of the impending eviction moratorium expiration, unemployment benefits for about 12 million Americans are set to expire the day after Christmas, amplifying the stress many renters may feel as the year winds down.

However, as of Monday, a bipartisan group of lawmakers tasked with creating the relief package finally seemed closer to agreeing upon a relief bill, which would include a boost of assistance to renters. If Congress doesn’t pass spending legislation by Friday, the government will enter a shut down.

Here’s how the situation stands now, as renters, landlords and housing advocates wonder what the near future holds.

In an effort to make headway on talks that have been at a stalemate for weeks, on Monday, the bipartisan group of lawmakers put forth two relief proposals: the first is a $748 billion package that includes aid to small businesses, new unemployment benefits and aid to other programs that have received bipartisan support; the second is a $160 billion package that includes liability protection for businesses, and state and local aid (both of which have been more divisive issues, and could potentially be nixed from a final deal).

The legislation also includes the following measures that stand to impact the rental market: an extension of the eviction moratorium through the end of January, $25 billion in rental assistance, 16 weeks of unemployment benefits at $300 per week for unemployed Americans, and $300 billion in small business relief.

Through the CDC’s moratorium, renters have been able to complete a declaration form, under penalty of perjury, stating that the renter is unable to pay all their rent as a result of the pandemic, and that they have made efforts to seek out aid to help them pay rent. The renter then submits the paperwork directly to their landlord.

Despite federal and state bans that have been in effect on and off for the past several months, across 27 cities tracked by Princeton University’s Eviction Lab, landlords have filed over 150,000 evictions since the start of the pandemic. Tenants continue to be evicted because some aren’t informed about protections, but also because the moratorium isn’t being enforced uniformly by landlords and judges. Since the moratorium doesn’t expressly prohibit all eviction filings across the board, landlords and judges are using alternatives routes to continue to file evictions.

“One of the big issues with [the CDC moratorium] is it relies on the tenant to come forward with this declaration … So, the tenant has to know about the moratorium and many tenants do not know about it,” Sandra Park, a senior staff attorney for the ACLU’s Women’s Rights Project, told Inman. “And we’ve also just seen in certain situations, it actually gives landlords incentive to make sure their tenants don’t find out about it. So, that’s been one of our concerns, is that when you rely on tenants affirmatively raising their rights that they’re not required to have notice of, it really creates that incentive for the rest of the system.”

What proportion of renters are still paying?

Despite economic uncertainty, the majority of renters have been remarkably resilient when it comes to paying rent. As of November 20, 2020, 90.3 percent of apartment households made a full or partial rent payment, according to the National Multifamily Housing Council (NMHC). That percentage, while down slightly from 91.9 percent of households that made rent payments in November 2019, has stayed largely consistent since May.

“That was a huge surprise throughout this pandemic, quite frankly,” Joshua Clark, Zillow economist, told Inman. “Just how resilient [rent payments were], really. It was down year over year from previous months for most of the pandemic, but not majorly.”

“September was down 5 percent, so about double the highest month previously,” he added. “And just now in December, it’s down 7 percent year over. So that’s a big change, honestly, that gives me concern.”

Clark added that a hit to rental payments like that could be attributed to people’s increased spending during the holidays, and potentially being more willing to take a late rent penalty while prioritizing other spending.

“That’s speculation on my part, but the fact that we’re seeing the largest drop of this crisis during December, that did catch my eye,” he said.

The impact on public health

Between 30 and 40 million renters may be at risk of eviction if the federal moratorium expires, according to estimates from the National Low Income Housing Coalition (NLIHC). Based on that figure, the Innovation for Justice Program estimates that various costs related to individuals becoming homeless, including the cost of emergency shelter, inpatient medical care, emergency medical care, foster care and juvenile delinquency for evicted renters who become homeless, may reach between $62 billion and $129 billion. The amount of back rent renters could owe at that point could reach up to $34 to $70 billion.

“That’s going to have really dire consequences not only for individuals, but for communities and our nation as a whole,” Sarah Saadian, vice president of public policy at the NLIHC, told Inman. “There’s a lot of evidence that evictions have long-term consequences to education outcomes and health outcomes generally. But in the context of the pandemic, evictions also put lives at risk.”

As the nation gets deeper into flu season, individuals evicted with nowhere to go will indeed face serious health risks. A new study by researchers from the University of California, Los Angeles; University of California, San Francisco; Johns Hopkins University; Boston University; and Wake Forest University School of Law shows that evictions carried out between March and September as a result of expiring statewide bans led to an additional 433,700 COVID-19 cases and 10,700 COVID-19-related deaths.

“The numbers are catastrophic,” Megan Hustings, deputy director of the National Coalition for the Homeless, told Inman. “It’s just hard to fathom, because homelessness was already a huge and growing problem, and thinking about just all the people that could potentially very soon and very quickly be suffering from unstable housing conditions in the middle of a winter, in the middle of a pandemic, it’s mind-boggling.”

“When renters lose their homes, especially those with the lowest incomes, they don’t have a lot of good options available to them,” Saadian told Inman. “They might have to double or triple up with other households, or they might get pushed into homelessness, and in both cases, it’s a lot more difficult to practice social distancing, and so, easier for the virus to spread. So, all of that’s happening starting at the end of the year, which is also during this heightened resurgence of COVID cases and the dead of winter … So it’s a context where it’s sort of an emergency on top of an emergency.”

How quickly an expiration could impact renters

Even if a stimulus package isn’t passed in time and the CDC’s moratorium is allowed to expire, there’s good reason to believe that the new administration entering the White House on January 20th will continue the ban. Biden aides have mentioned the possibility of the president-elect signing executive orders on his first day in office extending eviction and foreclosure moratoria, as well as some student loan payment deferrals that are also scheduled to expire come 2021, according to a report by The New York Times.

Still, even if the moratorium is extended and the $25 billion in rental assistance is passed, advocacy groups say that amount will hardly make a dent in what’s needed.

“The package, as we know, would include $25 billion for rental assistance,” Hustings said. “But the number that’s been suggested, kind of researched and put out there, is that we need at least $100 billion. So, it’s kind of a drop in the bucket.”

Because of the different ways in which evictions have either been restricted or allowed to move forward — depending on the jurisdiction — it’s not clear exactly how quickly renters as a whole would be impacted by an expiration of the moratorium.

While housing courts have undoubtedly been backed up as a result of the pandemic, because many evictions have been allowed to file up to the point of physical eviction, those orders will not take long to be completed after the start of the new year.

“I think that it’s very likely that evictions could be ordered and executed as early as January 4th,” Park said. “The way that the moratorium right now has been working, is that in some places, courts are not really allowing cases to move forward. But in other cases, courts are allowing cases to move forward until the very last step, which is the physical execution of the eviction.”

“That’s why I think all of us are really concerned about the expiration and it’s really important for there to be an extension, because that three-week gap … We could see many evictions actually take place during that time period,” Park added.

What landlords have to say

When Inman spoke with Clark, landlords and other experts back in August about the impending expiration of renter protections then, most seemed to think that landlords had little to gain by evicting tenants en masse. While there’s no doubt that evictions have moved forward in some cases, the sentiment that landlords should try to hold on to tenants, rather than evict them, seems to have become more pronounced as the months have passed.

“The amount of vacancies that we have due to this crisis in the cities is overwhelming, and I think that’s kind of what you need to look at as overall … having more of an impact on the market than the eviction crisis that we’re seeing,” Demetrios Salpoglou, CEO of Boston Pads, told Inman. “So, we have a bigger problem of the highest amounts of vacancies we’ve probably seen since 1989 or longer.”

Salpoglou noted that the real time vacancy rate of apartments throughout Boston that the company tracks across its 180,000+ apartment listings is currently up 424 percent from the same time last year. Therefore, landlords have much greater incentive to work things out with tenants, one way or another.

“When I talk to [my landlords], they’re like, ‘I’m working it out with this tenant, we’ve had a good relationship, they’re going to be a little late on rent,’ whatever it is,” Salpoglou said. “They’ve been working it out. I can’t speak to like, if there’s some bad actors … but I think that’s the one-off.”

Even amid compromise, landlords are feeling the pinch and have called for legal action. In late November, the Alabama and Georgia Realtors associations sued the Trump administration over the eviction ban, arguing it merely shifted the burden of billions in debt from renters to landlords.

Pending home sales fall further than expected in June
Back to top
Network with CoStar, Redfin, Realogy, SERHANT., Divvy, and thousands more in-person at ICLV this October. Prices go up Sunday.Register Now×
Inmanpot
Log in
If you created your account with Google or Facebook
Don't have an account?
Create an Account
Forgot your password?
No Problem