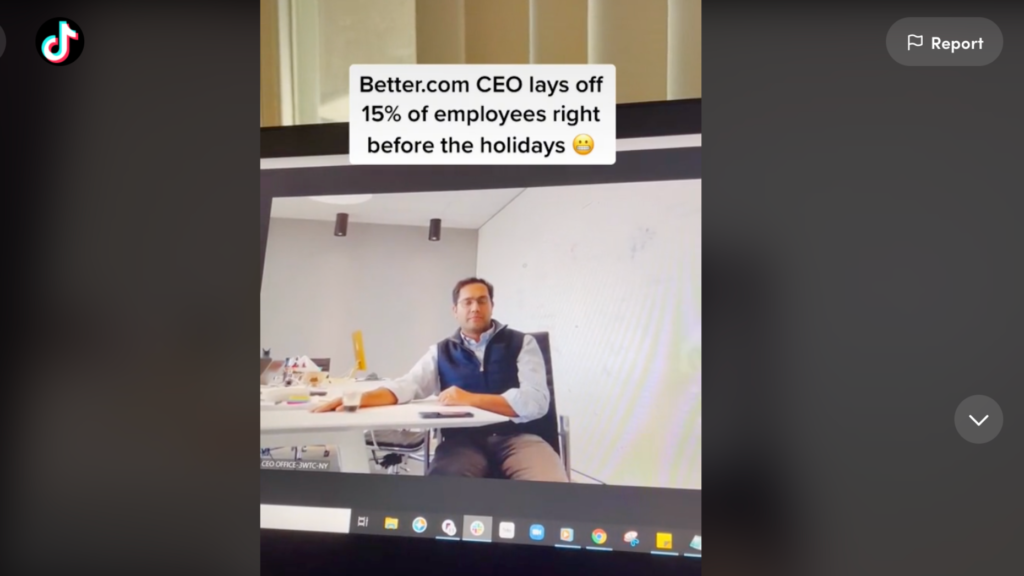 This video of Better Mortgage CEO Vishal Garg went viral over the weekend, as the public responds to the company’s decision to lay off 900 employees just weeks before the holidays.

Mortgage company Better is under fire after CEO Vishal Garg laid off approximately 900 employees during a Zoom call just weeks before Christmas that has since gone viral.

The TikTok video of Garg’s announcement has been viewed 3.5 million times in three days, garnering more than 158,000 likes and attracting 16,000 comments as the timing and nature of the layoff announcement appeared to hit a nerve.

“This is the second time in my career I’m doing this and I do not — do not — want to do this,” Garg said matter-of-factly in the video. “The last time I did it, I cried. This time, I hope to be stronger.”

In the video, the employee recording the call can be heard reacting to the news in real time, expressing disbelief and anger toward Garg as the executive clarifies that everyone on that call was part of the laid-off group.

The video, which was originally posted on YouTube but later taken down, has started to spread across other platforms as well.

On YouTube, users have posted multiple versions of the video, sparking blowback in the comments.

“Just remember guys, loyalty!” one YouTube comment reads. “You can take comfort in knowing the people at the top who can’t run the company will be keeping their jobs though. Happy holidays!”

Some Twitter users also took note of the decision to lay off 9 percent of the workforce — not 15 percent, as the CEO had mistakenly said in the initial announcement.

The CEO @ https://t.co/VNi1LcKgsg laying off 15% of workforce right before the holidays. Absolute horrible move on his part and making it all about himself. Hope those laid off bounce back quick! #better pic.twitter.com/7r6WGoTqoN

The “market has changed,” Garg said on the call with the laid-off employees. The layoffs put Better in a position to grow as lenders focus more on purchase loans and less on refinancing, the company said.

“I wish we were thriving enthusiastically as we were at the beginning of this year,” Garg said on the call. “But that’s not the case. And I am sure that you will leave us and be more successful, more fortunate and luckier in your next endeavor.”

A company spokesperson told Inman last week that Garg misspoke because of an error in his talking points, and that 9 percent of Better employees were being laid off globally.

Better is putting a positive spin on the news, saying the layoffs will position the company for growth as lenders shift their focus from refinancing mortgages to providing purchase loans to homebuyers.

SoftBank and Novator Capital have committed to provide up to $750 million in additional financing through a convertible note at Better’s option within 45 days of closing the merger. SoftBank invested $500 million in Better in April, by purchasing shares from existing Better stockholders.

While Garg expressed regret in his call with the terminated employees, he was harsher in an anonymous post he left on the professional networking website Blind.

In the post, he argued that nearly one-third of the employees who were laid off had been unproductive in their roles.

“You guys know that at least 250 of the people terminated were working an average of 2 hours a day while clocking in 8 hours+ a day in the payroll system? They were stealing from you and stealing from our customers who pay the bills that pay our bills,” Garg wrote on Blind. “Get educated.”

Garg later confirmed to Fortune that he was the author of the anonymous post. Current employees told Fortune that after their colleagues were laid off last week, Garg told them the company would be closely watching their productivity as well. 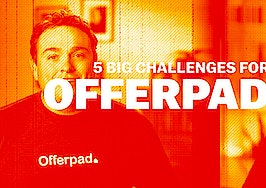