The real estate holding company reported $1.6 billion in revenue, a 6 percent uptick over the first quarter of 2021 during a quarterly call Thursday that effectively kicked off earnings season for real estate stocks.

Amid a real estate market still turned on its head with rising mortgage rates, low inventory and inflation, Realogy reported strong revenue growth for the first quarter of 2022 during an earnings call Thursday that effectively kicked off earnings seasons.

The Madison, New Jersey-based real estate holding company reported $1.6 billion in revenue, an $88 million — or 6 percent — uptick over the first quarter of 2021. But the franchisor also had a reported net income of $23 million and basic earnings per share at $0.20 — a modest decrease of $10 million and $0.08 per share year over year, as the company navigates the shifting market.

Realogy’s operating EBITDA clocked in at $69 million, a decrease of $93 million from the previous year, while generated free cash flow was at negative $275 million compared to negative $67 million for the same quarter in 2021.

“Realogy demonstrated continued momentum in our strategic transformation, delivering some of the best revenue and Operating EBITDA results for a first quarter in company history,” Realogy CEO Ryan Schneider said in a statement on Thursday. “Bolstered by our proven performance, industry-leading talent, and technology leadership, we continue to position Realogy for the future as we move real estate to what’s next.”

The holding company, whose brands include Sotheby’s International Realty, Better Homes and Gardens Real Estate, Corcoran, and Coldwell Banker, generated $8 billion in revenue throughout 2021, with $2 billion generated in the final quarter of that year.

On a call with investors Thursday morning, Schneider said the company’s biggest challenge came from its mortgage venture, which lost $8 million during the first quarter as the mortgage industry at large is hit with decreased demand and other mortgage lenders such as Wells Fargo eye layoffs and buyouts as mortgage rates rise.

“A much higher mortgage market than last year combined with very tough rate and margin trends that emerged in Q1 negatively affected both Q1 results and our mortgage outlook for the full year 2022,” Schneider said.

Even with rising rates, revenue on the brokerage side has been bolstered by limited supply, Schneider explained.

“We are operating in a world where rates are rising but it’s very supply constrained,” he said.  “Demand is incredibly strong.”

The company’s market share has also benefited as supply has dwindled over the past year, with Realogy’s network holding the largest amount of inventory out of the top brokerages nationwide in 2021 according to a recent report.

Its network has grown as well, with a six percent growth in agent count year over year, according to a news release.

“In the first quarter, Realogy once again produced impressive results, delivering $1.6 billion of revenue and $69 million in Operating EBITDA,” Charlotte Simonelli, Realogy’s executive vice president and chief financial officer said in a statement. “This consistency of delivery, strong financial discipline, and continued momentum reflect the strength of our core business, positioning us to accelerate our growth and continue delivering value as we propel our transformation forward.” 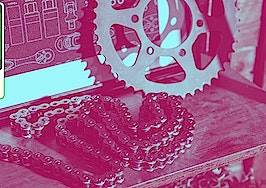