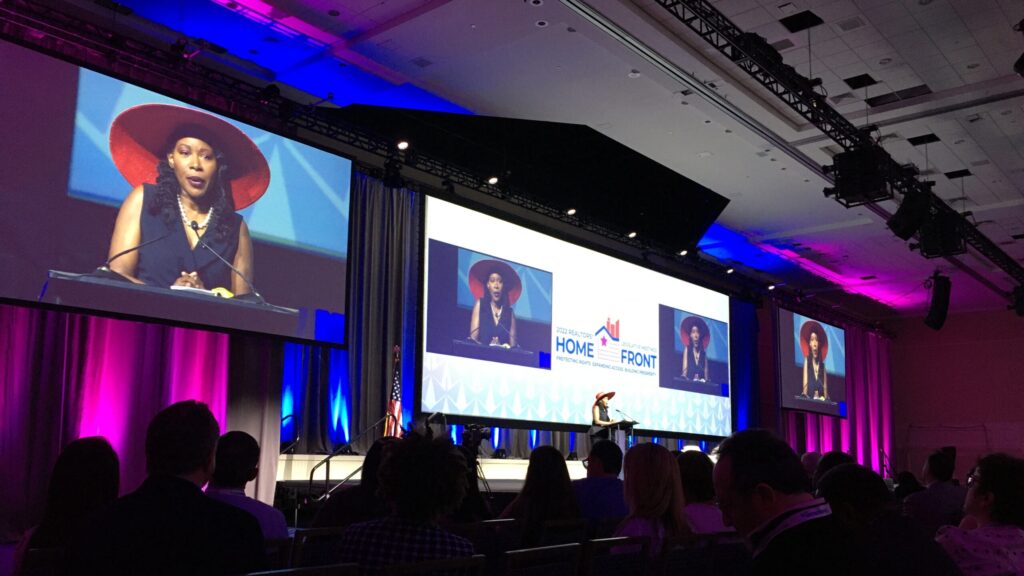 Isabel Wilkerson at the Realtors Legislative Meetings, May 2022

Isabel Wilkerson urged attendees at the Realtors Legislative Meetings at NAR midyear to roll up sleeves and fix the consequences of past racist policies without guilt, shame, blame or emotion.

When any of us inherits an old house, we realize that the uneven joists and beams, the faulty wiring, and the rusted plumbing are not our doing — but that doesn’t mean we just leave those things as-is. The same is true for the consequences of housing discrimination.

That was the gist of a talk by Isabel Wilkerson, the author of “The Warmth of Other Suns” and “Caste: The Origins of Our Discontents” at the Regulatory Issues Forum of the National Association of Realtors’ midyear conference, in a session called “Our Racial Moment of Truth: The Infrastructure of Our Divisions and its Impact on Housing Policy.”

Wilkerson, 61, spoke before a crowd of hundreds at the Realtors Legislative Meetings on Monday afternoon in National Harbor, Maryland. The event has so far focused heavily on fair housing and the racial wealth gap.

“I emphasize so much the idea that we take responsibility for — not guilt, not shame, not blame, not emotion,” she said.

“You may not love the fact that you discovered that there was water in the basement. But you don’t have time to get emotional. You’ve got to roll up your sleeves and fix it and that’s what we are facing as a nation,” she continued, prompting applause from attendees.

“If you don’t go in the basement, it’s not as if you will not have to deal with this,” she added. “Ignorance is no protection from the consequences of one’s inaction.”

When Wilkerson’s mother moved to Washington D.C. it was during a time when redlining and restrictive covenants were legal and official barriers to black homeownership in cities across the country.

“She went out to try to get a home and she was told that she would have to go through a middleman,” Wilkerson said.

Her mother was not allowed to see inside the house she purchased before buying it.

“It ended up that she not only paid off the home, but she outlived the man who told her she wouldn’t,” she added, prompting applause and delighted laughter from attendees.

Wilkerson’s parents were part of the Great Migration, a phenomenon she covers extensively in “The Warmth of Other Suns,” when 6 million African Americans fled the Jim Crow South.

“They were seeking political asylum within the borders of their own country,” she said.

“They were doing what the ancestors of most every American had to do just for us to be here today, whether our ancestors came from across the Atlantic Ocean [or] across the Rio Grande, what they were doing is what propels immigrants from all over the world throughout time.

“Except the difference here is that this is the only group of Americans who have to act like immigrants in order to be recognized as the citizens they always have been.”

Wilkerson described African Americans as defectors from a caste system where even the word of God was segregated — in court proceedings, white and black jurors would swear to tell the truth on different Bibles.

“That means that the same sacred objects could not be touched by hands of different races,” she said.

“That is a fundamental characteristic of what is known as a caste system.”

In the first waves of the Great Migration, people were recruited to come to Northern cities. Wilkerson’s mother was recruited by the federal government. But it turned out that those cities wanted the labor, not the people, according to Wilkerson.

“How exactly can you do that?” she said. “Well, you do that by creating redlining, by creating zones in which people would not even qualify for a mortgage or are denied the right to have a mortgage to get the American dream.

“Also restrictive covenants, which meant that white homeowners, even if they wanted to,” couldn’t sell their homes to people in restricted groups, she added.

Wilkerson pointed to the sheer waste caused by restricting the vast majority of African Americans’ lives throughout the country’s long history.

“[On those fields and plantations] were opera singers, jazz musicians, playwrights, novelists, journalists, Realtors, professors, all kinds of people. We know that because that is what they and their children and their grandchildren and now their great-grandchildren have often chosen to become once they had the chance to choose for themselves what they would do with their God-given talent.”

“This is the world that precedes us and we are still living with the after-effects,” she added.

She pointed to the January 6 Capitol insurrection as a consequence of too many people not knowing the nation’s history and “programmed to see themselves as dominant.”

Slavery, for instance, lasted 246 years, and it will not be until July of this year that the United States will have been a free and independent country for as long as slavery lasted, she said.

“That will not happen until the year 2111. It will not be until the second decade of the 22nd century that African Americans will reach parity between freedom and enslavement.”

Wilkerson’s story about her mother underscored a point she made repeatedly throughout her talk: discriminatory housing policies are not ancient history.

“This has a material effect on the real-life prospects of true and real people,” she said.

“This is not theoretical. This has an impact on entire generations. And we know that generational wealth is connected to homeownership.”

Wilkerson noted even more recent examples of alleged racial bias, including the nearly $500,000 appraisal jump of a black couple’s home in the San Francisco Bay Area after the couple removed any sign of their race and had a white friend pose as the homeowner.

“We’re not talking about the former Jim Crow South,” she said.

She pointed to a study that found that it will take 228 years for African Americans to reach parity with their white counterparts as a result of their exclusion from the economy.

“That is not something that is fixed in a single generation,” she said.

In her book, she presented herself as akin to a building inspector that “shine[s] a light” on the areas of the country that need work, going into the spaces of a home that no one else wants to look at.

“It’s the responsibility of the owner to know what is wrong with the house that they are buying … to know what they’re in for,” she said.

“That is how I see an understanding of the past. It’s like holding up an x-ray of our country. It allows us to see what is going on that we otherwise would not recognize.”

Given that the country is hundreds of years old, it shouldn’t be surprising that it would need work, she added.

“We would not be responsible keepers of this old house if we were not willing to roll up our sleeves and to do the work,” she said.

We are not responsible for what previous generations did, according to Wilkerson.

“No one alive had anything to do with the difficult history that we may be speaking about,” she said.

“[But] we have everything to do with what happens going forward.”

Attendees applauded and gave her a standing ovation as she left the stage. 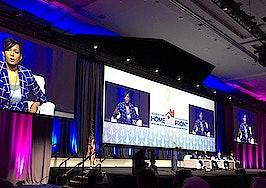 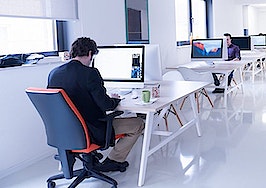