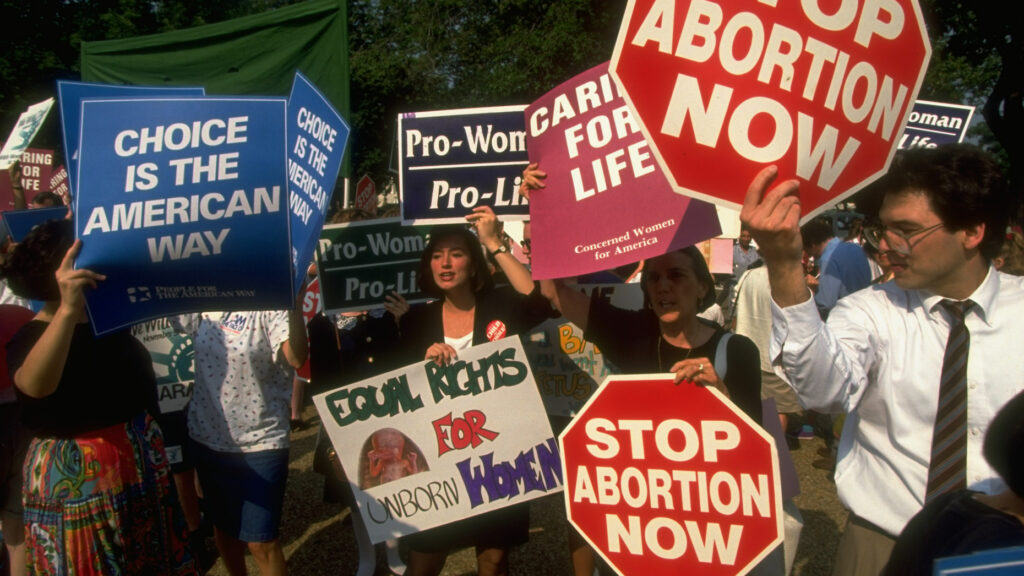 Sign-carrying pro-choice and pro-life advocates clashing outside Supreme Court in 1992.

Editor’s Note: This story was updated with the decision by the U.S. Supreme Court on June 24, 2022.

The U.S. Supreme Court on Friday overturned a nearly 50-year-old ruling allowing legal abortions in the United States in a 6-3 vote in favor of putting an end to constitutional protections set in 1973.

The decision to overturn Roe v. Wade by a conservative majority in the court is expected to lead to bans in approximately half the states, according to the Washington Post and could potentially lead to new migration trends that see liberal- and conservative-leaning voters moving states to be closer to health care that fits their politics.

The culmination of decades of efforts by advocates of anti-abortion policies, the decision on Friday was likely made possible by a Supreme Court in which three conservative justices were recently appointed under former President Donald Trump. The ruling came about a month after a leaked draft of an opinion by Justice Samuel Alito was published by Politico.

The leaked document was not a final version of the court’s decision, but did foreshadow the fact that Roe v. Wade would later fall.

This case will have major implications for the healthcare, political and legal industries. But it may also reshape something else as well: housing. In other words, 49 years after Roe v. Wade abortion remains as contentious as ever, and a major change in policy could influence where Americans are willing to live and work. How exactly this plays out remains to be seen, but here’s what real estate professionals need to know about a major legal case that could upend the housing market.

The short answer here is a qualified no. The Supreme Court was considering a Mississippi law that banned abortions after 15 weeks. But the court’s ruling this week didn’t create a universal abortion ban. Instead, it kicked the issue back to the states — meaning different states can decide whether or not abortion should be legal and which restrictions they want to impose on the practice.

In liberal states, such as California and New York, not much will change after Roe v. Wade. Such states already have laws on the books allowing abortions, and their respective lawmakers have previously gone on the record as being pro-choice. California and New York may amend their state constitutions to further enshrine abortion rights, reports Tuesday also suggested.

An interactive map from the Center for Reproductive Rights indicates that in a post-Roe world, abortion will remain legal in other states including Oregon, Washington, Nevada, Illinois, Florida, Colorado and others.

On the other side of the spectrum, 13 states have what are called “trigger laws” that are designed to make abortion illegal as soon as doing so becomes possible — or in other when Roe v. Wade was overturned. States in this category include Utah, Texas, Idaho, Oklahoma and others. In practice as many as 26 states could ultimately move to ban abortion in a post-Roe environment, an analysis by NBC News further suggested.

But the point here is that after Roe v. Wade, the U.S. will likely have a patchwork of abortion laws in place.

Further complicating matters, Attorney General Merrick Garland slammed Court’s decision Friday and said in a statement that the U.S. Justice Department “will work tirelessly to protect and advance reproductive freedom.” Garland went on to say that the U.S. Food and Drug Administration has approved the use of abortion drug Mifepristone, and state law can’t override the FDA’s approval.

It’s unclear how Garland’s gambit might play out, but his statement indicates that there will be many battles over this issue to come in the short and long terms.

How is this going to impact housing?

“Hypothetically, we could see households who oppose the Courts’ decision consider relocating from conservative states” to more liberal ones where abortion remains legal, Matthew Gardner, chief economist for Windermere Real Estate, told Inman in May.

It’s still too early to tell how big such a shift could be or if it will have a major impact on housing, but it is conceivable that people will want to relocate to a region that more closely matches their political orientation.

A useful analog here might be tax policy. Different states have wildly different approaches to taxes on income, property, sales and other things. And as a result, it’s not uncommon for Americans to opt to live in a state with no income tax, for example, or where property taxes are comparatively low.

Taxes are more of a financial issue than an ideological one for many people (though not all), but the point is that a patchwork of governmental policy does influence the flow of real estate consumers across state lines.

Toby Mathis — a tax attorney, real estate investor and author — made a similar point, telling Inman in May that conservative states with abortion bans “might have some people leaving.”

But this process won’t play out equally across the socio-economic spectrum. Gardner pointed out that a post-Roe patchwork of policies would impact lower income households more than higher income households, the latter of which could more easily travel across state lines to obtain an abortion. Higher income families also tend to own homes — a fact that suggests the overturning of Roe v. Wade won’t immediately unleash a deluge of politically minded real estate consumers moving to new states.

On the other hand, Mathis argued that “if you’re in a state that has [abortion] restrictions, clearly there’s a financial burden to it.” In other words, states that require mothers, especially those with lower incomes, to carry births to term will be “more likely to have to support that person with public assistance.”

“There’s going to be a burden to care for those people,” he added.

Housing costs may also be a factor; not every liberal Texan, for instance, will be able to afford to relocate to California, and that will influence the types of consumers who move and what kinds of houses they might want to buy.

All of this is to say that there are basically two big ideas to keep in mind right now. The first is that ideology and politics may drive some real estate consumers’ decisions. And the second is that economics will determine who has the ability to move and how states manage their finances post-Roe.

What about the jobs market?

The other big question is what happens to the jobs market. Recent years have seen cities, such as Austin and Salt Lake grow their tech hubs in part by luring companies and workers away from the coasts. But companies from liberal-leaning California could be less enthused about operating in conservative leaning-Texas after the end of Roe v. Wade.

“I could see that becoming part of the equation,” Mathis said.

Already some version of this has begun to play out. Last year when Texas passed a controversial abortion ban, companies with a presence in Texas, such as Tesla, faced calls to speak out on the issue.

The tech sector largely sat out that particular fight, though in Florida consumer and worker pressure did manage to push Disney into the battle over the so-called “don’t say gay” bill about gender and sex education. The episode illustrated the intersection of big business and hot-button politics, and it’s easy to imagine something similar happening to other companies based on their respective states’ abortion policies.

And, of course, all of this feeds into the housing market, as big business and technology hubs have seen home prices soar in recent years. The end of Roe v. Wade, then, could end up tweaking those housing markets.

“Markets such as Austin, Texas – which has seen its political bias move toward the left given significant growth in the technology sector – may well see staff (and even entire companies) consider relocating to more liberal states,” Gardner concluded, “but it is too early to say at the moment.” 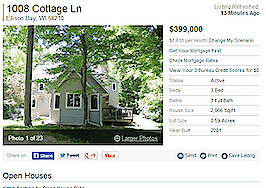