Guest blogger Jay Thompson is the designated broker and co-owner of Thompson’s Realty in Phoenix, AZ. You can find his award-winning blog at PhoenixRealEstateGuy.com. His latest blogging adventure is RealEstateBlogPro.com. 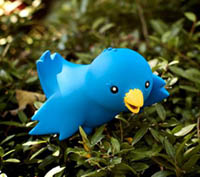 On September 14, Twitter announced its most ambitious site redesign to date. The rapidly growing “information network” is introducing, “a new, re-engineered Twitter.com that provides an easier, faster, and richer experience.”

The update will roll out to users gradually over the next several weeks and include such features as:

New design: A rich details page that promises a cleaner timeline. “Infinite scroll” means you no longer will need to click “more” to view additional Tweets.

Media: Twitter is partnering with numerous large players in Internet media such as Flickr, YouTube, Vimoe, Ustream, and TwitPic (to name just a few) to embed and integrate photos and video directly on Twitter.

Mini profiles: Click on a user name and you’ll be presented with on-page access to the user’s bio and related Tweets.

Here is a video that Twitter released highlighting some of the changes. Less than 24 hours after the video was published, it had been viewed almost 400,000 times…

My first thought when I heard about the new Twitter.com was, “I rarely go to Twitter.com now, I doubt I’ll go there in the future.”

Like many Twitter users, I use a third-party Twitter client to monitor and interact on Twitter. TweetDeck is my client of choice, and Seesmic Desktop and HootSuite (a web based application) are other popular clients. Many of these clients already incorporate the functionality of the new Twitter.com. However, according to Twitter founder and CEO Evan Williams, 78% of unique Twitter users are using Twitter.com (seems high to me, but I’m not the CEO of Twitter…).

Why don’t I use Twitter.com? Because – in its current incarnation – it doesn’t offer the same experience as the third-party applications. I find it painful to navigate, and I’m constantly having to go off the site or open other windows to get the information I need. The third-party clients provide a much easier, faster and enriching experience – exactly what the new Twitter is offering.

What Twitter’s redesign may do is cause these third-party applications to review and enrich their products. Competition tends to lead to innovation, and with Twitter stepping up its game the third-party providers are going to have to do the same.

However, one of the things about Twitter that appeals to many is its simplicity. Will the new Twitter, and the push to include more and more information ruin this? I hope Twitter doesn’t lose that simplicity. Many are calling the new features “Facebookish” – and Facebook is already known for having what can be a confusing and cluttered user interface.

I suppose only time will tell. With 90 million Tweets being sent daily, and 370,000 new users getting Twitter accounts every day, Twitter is a force to be reckoned with. Generally speaking though, people are resistant to change. How this change manifests itself will be interesting to watch.

And clearly people are talking about the change. At the time of this writing, there are 31,800 news articles indexed on Google News – less than 24 hours after the announcement.

What do you think about the new Twitter.com