Share prices in Zillow and Trulia surged today, suggesting investors have gotten wind that the Federal Trade Commission intends to sign off on the companies’ proposed merger.

Trading in Zillow and Trulia has been heavy, with twice as many shares changing hands before noon Eastern time than is typical for an entire day. 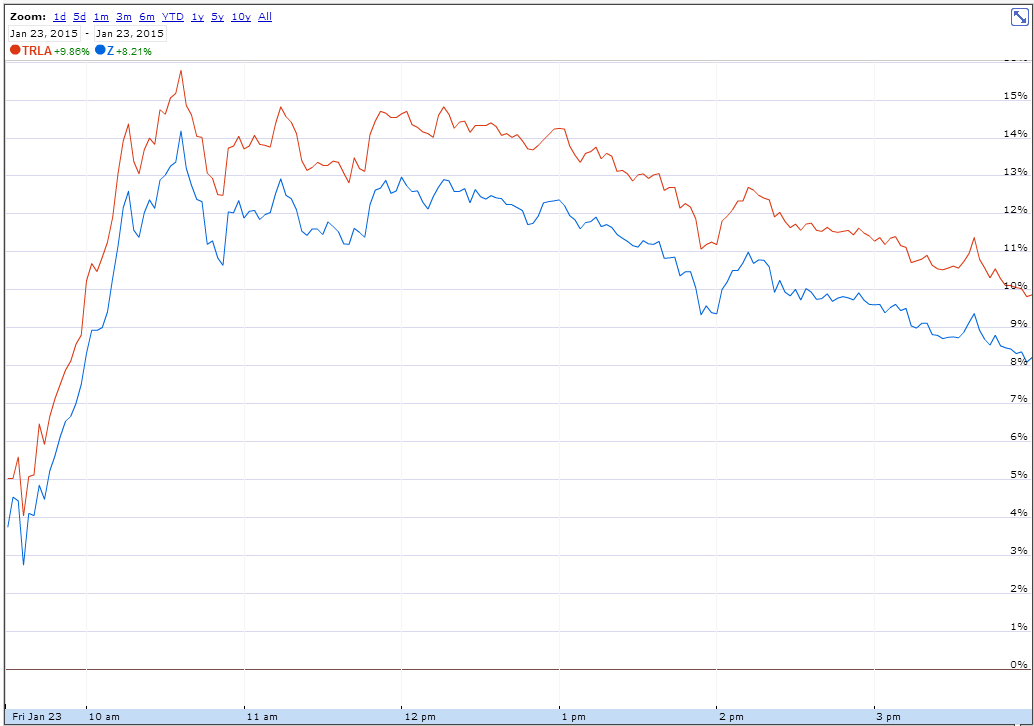 Bradley Safalow, founder and CEO of stock analysis firm PAA Research, confirmed that a rumor is indeed swirling around Wall Street that the FTC has approved the deal.

The proposed all-stock merger, announced in July and approved by shareholders Dec. 18, is still under review by the FTC, which made second requests for information from the companies in early September. Zillow has agreed to hold off on closing the deal until Feb. 15, unless the FTC wraps up its review before then.

Zillow also announced today that the Zillow Pro for Brokers program has doubled in size since July, with more than 5,000 partners now sending listings directly to the search portal.

New “Pro for Brokers” partners include:

Before today’s upswing, shares in Zillow have traded at a discount of as much as 40 percent from a high seen after the merger was announced in July. Since then, global media giant News Corp. acquired realtor.com operator Move Inc.

Zillow announced this month it would not be renewing a licensing agreement with Move’s listing syndication platform ListHub that’s scheduled to expire April 7. Zillow relies on ListHub for some of its listings data, and with the end of the agreement looming the portal is looking to obtain more listings directly from multiple listing services and brokers.

Zillow has launched a new dashboard and customer service division to make it easier for multiple listing services and brokers to send their listings to the portal directly.

Even if the FTC decides not to block the merger, it could attempt to impose conditions on the deal. As part of its evaluation, the FTC may have looked at how the deal affects smaller brokers, who don’t have as much clout as large companies to negotiate advertising discounts and terms governing the display of their listings.

If the merger is approved, Zillow CEO Spencer Rascoff has said that Zillow plans to operate Trulia as a separate brand. Integration of the two companies, which each have more than 1,000 employees, will take time.