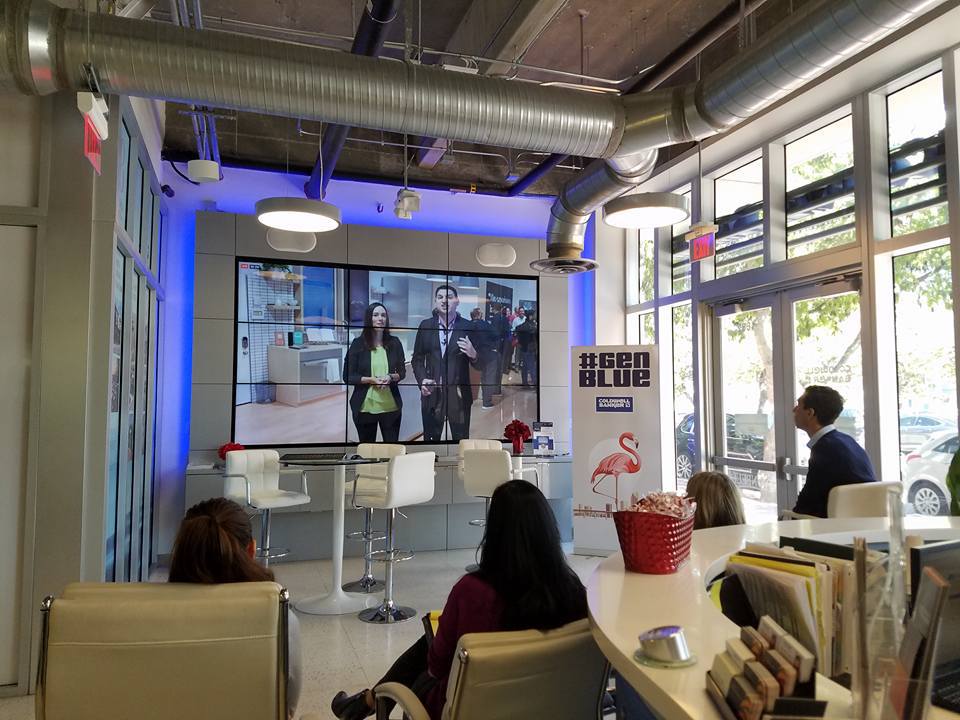 Facebook Live was a risk, especially with users’ allegiance to other apps (like Periscope), but Facebook’s decision to push Live videos to the top of users’ news feeds and even giving videos a separate tab on the mobile app shows that Live was a risk that paid off — big time.

Now, brands and businesses are jumping on the Facebook Live train and are figuring out how to get a piece of the more than 100 million hours of video watched on the platform each day (according to Facebook).

An opportunity to cover CES in a new way

Coldwell Banker, the company that’s worked to become the real estate authority on all things smart home, is now gunning to be the industry leader in social media techniques, as evidenced by its Facebook Live coverage of the Consumer Electronics Show (CES).

While most Facebook Live videos have a spur-of-the-moment quality, Coldwell Banker VP of Brand Engagement David Marine said they wanted to produce a polished, TV-worthy broadcast for their first foray into the world of live video.

“At Coldwell Banker, we’ve long been proponents of not just using video to tell our story, but to do it in a way that is unique and engaging to the audience,” he said.

“For the most part, we’d seen Facebook Live used just as a way to stream for a few seconds from someone’s phone, which often times means a lack of strategy, but we saw it as an opportunity to basically host a fully produced live show.”

Marine said the team’s main goal was to keep the attention of their audience by treating the live stream like a morning news show, complete with topic segments, interviews and game shows their audience could follow along with.

Marine said the broadcast took a great deal of strategy and planning that involved input from Coldwell Banker’s video production company and several of the company’s smart home partners on where to film at CES, which products to feature and how to choose participants for the Who Wants To Be A Millionaire-esque game show.

The news studio format paid off for Coldwell Banker — in less than a month, the company has seen over 1.2 million engagements from their Facebook Live video and other smart home content from CES.

“The reaction from our network after our CES Live segment has been tremendous, and the use of the news studio format was to them impressive because none of them had seen Facebook Live used in that way before,” said Marine.

“Many of them expected it to be a straight one-shot camera feed but loved the fact that once again, Coldwell Banker was doing things in video that hasn’t been done before in our industry.”

Marine said one of the keys to success to Facebook Live for brands is an air-tight marketing plan and engagement with the viewers throughout the broadcast.

“For a business page, you really need to make it a tune-in moment,” he said. “We did a lot of promotion ahead of time to get our agents and offices to save the date/time and even plan events around watching the live stream as a company.

“We also found that engagement with the viewers throughout the stream is critical,” Marine added. “You have to give them a reason to continue watching and engage them with the content.

“I have a fantastic team of social media experts in Lindsay Listanski and Alexandra Filiaci who, when they were not on camera, were monitoring the conversation, highlighting comments and making the audience feel like they were just as much a part of it as those on camera.”

Marine said going forward, the company will use Facebook Live to broadcast from major events, like CES or Generation Blue Experience, or when there are major announcements.

Marine said the brand will continue to perfect its Facebook Live strategy as well as delve deeper into its use of virtual reality for listings.

Virtual life stressing you out? 3 healthy habits to adopt