Big Mid-South brokerage Crye-Leike Realtors, one of the largest firms in the country, has pulled all of its roughly 2,000 listings from Zillow and Trulia in its largest market: Nashville, Tennessee.

After testing life without the two popular portals in a handful of other markets, the Memphis-based firm says that its business was unharmed. The move came with some risk because in the other areas, Crye-Leike is the clear market leader, but in Nashville, the brokerage faces significant competition.

Zillow and Trulia currently receive listings directly from thousands of brokerage partners and a spokeswoman for the firms said the sites are adding new listings everyday. Zillow, specifically, receives listings from 8,800 partners, she said.

Nonetheless, a handful of large regional brokerages have also pulled their listings from Zillow and Trulia, leaving the two sites with holes in their listing databases in markets around the country.

The jury is still out on how agents and ultimately consumers may be affected by the move by some brokers to step away from the portals.

Crye-Leike began its syndication experiment in its hometown of Memphis in late January 2014.

The brokerage doesn’t say that withdrawing its listings from the two most popular websites in its home market boosted business, but the firm found out something important: the pullout didn’t hurt it, Crye-Leike CEO and co-founder Harold Crye told Inman.

Crye-Leike agents are also representing buyers on a higher percentage of the firm’s listings in Memphis than they were a year ago, Crye said.

He attributes the increased prevalence of double-ended deals to the firm’s listings not being on Zillow and Trulia. Both sites place buyer-agent ads next to the listings of agents or brokers who don’t pay to have the ads not appear.

Zillow and Trulia, both Zillow Group subsidiaries, now live without more than 8,000 of Crye-Leike’s listings. The brokerage, which has more than 3,000 agents in nine Southeastern states, will likely expand its Zillow/Trulia blackout zone to include all of its approximately 15,000 listings soon, Crye told Inman.

Source: comScore *Monthly average of unique visitors over the three months through February

Crye-Leike’s decision leaves most of its listings off the two most popular websites in Nashville. The brokerage’s own website didn’t meet the minimum threshold of traffic (at least 50,000 unique visitors per month) to register on comScore’s metrics in the market in February.

Crye-Leike Realtors says it will invest in search engine optimization as part of its limited syndication strategy.

“It’s incredibly important that home sellers have their homes marketed on the most visited real estate websites – in Nashville, that’s Zillow and Trulia,” Zillow Group spokeswoman Amanda Woolley told Inman. “It’s an incredible disservice to home sellers represented by Crye-Leike to not have their homes in front of the millions of home shoppers visiting Zillow and Trulia every month.”

Like Crye-Leike’s agents, William Raveis’s more than 3,500 agents can still send their listings to the portals, but their sellers must sign a consent form acknowledging that they understand the third-party portals can be inaccurate and that the firm and agent is not responsible for the information there.

(The listings that William Raveis sent to Zillow and Trulia before it decided to cut the two portals off still show up; its new listings since then do not. At publication time, the firm still had more than 3,000 homes listed on Zillow).

Crye-Leike and William Raveis, like a lot of brokerages, are trying to navigate the rapidly evolving world of online real estate; make business sense of the popular, powerful third-party portals; and balance the best interests of both their agents and consumers.

With the portals’ new ownership structures — Zillow acquired Trulia in February; News Corp. acquired realtor.com operator Move Inc. in November — some brokerages and agents are beginning to reevaluate the three portals and decide how they want to handle the marketing of their listings.

Crye-Leike and William Raveis cite similar reasons for pulling their listings from the two sites: accuracy concerns about the sites’ listing databases. Crye-Leike is also concerned about rising prices for its agents to advertise on Zillow and Trulia. William Raveis mentioned a desire to drive more traffic to its own site.

“As a listing agent, you lose the potential leads and the future business from (those customers) unless you pay what is basically ‘protection money,'” Crye-Leike’s founders and owners, Harold Crye and Dick Leike wrote in a company-wide email explaining their decision to expand the Zillow/Trulia blackout zone to Nashville.

“You shouldn’t have to pay to get your leads from your listings,” they wrote.

In addition, the brokerage’s leaders pointed to accuracy concerns regarding the two portals, which sometimes display stale or inaccurate listings because they get them from a variety of sources — something Zillow Group is working hard to change.

Vicki Cooper, a Nashville Crye-Leike agent Inman reached out to at random, supported that statement.

Listing inaccuracy was Cooper’s main complaint with Zillow and Trulia and why she supports her brokerage pulling its listings from the two sites. She didn’t like the automated home valuations or “Zestimates” that showed up on her listings on Zillow, or the buyer’s agents ads that showed up both portals, either.

So far, just one of Cooper’s sellers has noticed that their home wasn’t on Zillow. The seller reached out to her and she explained the firm pulled its listings due to irritations with inaccuracies and the seller understood, she said.

The slow march to pulling its listings from Zillow and Trulia has given Crye-Leike time to study how it has affected business in each market: first with Memphis last February, then in three markets in Arkansas in June and finally in Jackson, Mississippi, in October.

Crye said that the Zillow Group-ListHub divorce might speed the process up in the other markets where it has a big presence like Atlanta, Northwest Arkansas and Knoxville, Tennessee.

William Raveis Real Estate’s CEO William Raveis declined a request for an interview. He would not comment on the reasoning behind the brokerage’s decision other than to say, “We feel confident that raveis.com provides buyers with the most accurate information, and sellers with the best tools to market their homes both locally and globally.”

Other brokers are reacting to the new portal landscape in different ways.

In January, Kansas City, Kansas-based ReeceNichols, for example, turned its feed back on to Zillow after pulling its listings from the portal in 2012. New perks announced in January for brokers who send their listings directly to Zillow, especially increased prominence of listing broker and agent attribution, tipped the scales in the firm’s stance on the portal, ReeceNichols Vice President of Marketing Jodi Schade told Inman.

Edina Realty, once the poster child of the anti-syndication movement, is another firm that has reversed course. After pulling its listings from both Zillow and realtor.com in late 2011 and early 2012, it turned its feed back on to both and added Trulia last fall.

Others, like Pittsburgh-based Howard Hanna Real Estate, have gone all in, sending all their listings to Zillow and paying to enhance them to boot.

Source: comScore *Monthly average of unique visitors over the three months through February

In addition to realtor.com, William Raveis will continue displaying its listings on a variety of other third-party sites, including: LeadingRE.com, LuxuryPortfolio.com, LuxuryRealEstate.com, TheNewYorkTimes.com, TheWallStreetJournal.com, DuPontRegistry.com, LuxuryHomes.com, Facebook, YouTube, Pinterest, Unique Homes.com, and VisualTour.com, the brokerage said.

BHHS New England Properties has gone all in with the portals. It began paying to enhance all of its listings on Zillow and Trulia a couple of months ago and on realtor.com late last year.

“Consumers are going to Zillow and Trulia,” Adams said. “I believe I’m doing them a service” by putting the firm’s listings on the portals. “We owe the consumer that.”

By sending its listings to Zillow and Trulia in a direct feed, the firm also guarantees that its listings are accurate on the portals, she said.

Crye-Leike and other firms view realtor.com differently than Zillow and Trulia.

Both firms still feed their listings to the portal, citing its relationship with the National Association of Realtors, the “Realtor” brand in its name and the superior accuracy of its listing database as reasons for the distinction.

Some, like Crye-Leike, are waiting to see whether and how realtor.com’s policies change after its acquisition by News Corp. before deciding whether to pull their listings from the site, too.

Given the recent ownership change, “it’s too soon to decide whether we’ll pull our listings from realtor.com, but we’re looking at it,” Crye-Leike’s President and co-founder Dick Leike told Inman.

It’s not too soon to assess Zillow and Trulia, he said. “We’ve had a record on how they do business,” Leike said.

How realtor.com and Zillow Group measure up

Sources: Zillow, Trulia, realtor.com. * Agents or brokerages can pay to receive leads from their own realtor.com listings with the Showcase Listing Enhancements program. ** Listing agent and broker are listed just below the fold on desktop and mobile, higher than on Zillow, lower than on realtor.com.

“We’ve made the decision to continue syndicating new listings to realtor.com because they understand the real estate industry,” Raveis told Inman in an emailed statement. “Realtor.com is subject to the same code of ethics that we are, and they have a deep understanding of state and local licensing laws.”

Zillow Group and Move are both working hard to woo and appease brokers by increasing listing agent and broker attribution and adding perks for listings.

Zillow Group must work a bit harder than realtor.com because even with the direct feed deals it’s rapidly signing with MLSs ahead of the expiration of its feed agreements with popular listing syndication platform ListHub on April 7, many require brokers to opt in to send their listings.

Most of the direct feeds realtor.com has with MLSs, on the other hand, give the portal all their members’ listings by default.

“The fundamental fact that Move operates realtor.com on behalf of the National Association of Realtors means that we not only respect the real estate industry, but we have skin in the game,” Russ Cofano, Move’s senior vice president of industry relations, in an emailed statement.

“Our success and the success of brokers and agents is one in the same. Our industry charter also means that we will never compete with the essential value proposition of real estate brokers.”

Zillow Group Chief Revenue Officer Greg Schwartz, on the other hand, insists Zillow Group offers the most industry-friendly sites and wants brokers and agents to evaluate it and realtor.com solely on the merits of what they give agents, brokers and sellers.

History, loyalty and patriotism are powerful notions, Schwartz acknowledged. But, he argued that by providing prominent listing agent attribution and listing broker’s phone number, logo and reporting for free makes it a better syndication partner for the industry than realtor.com. 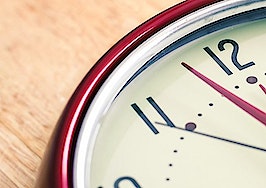 MLSs, let brokers know what to expect when midnight strikes
Back to top
Only 3 days left to register for Inman Connect Las Vegas before prices go up! Don't miss the premier event for real estate pros.Register Now ×
Limited Time Offer: Get 1 year of Inman Select for $199SUBSCRIBE×
Inmanpot
Log in
If you created your account with Google or Facebook
Don't have an account?
Create an Account
Forgot your password?
No Problem