If there’s any piece of software that’s supposed to be integral to a real estate agent’s success, it’s the CRM (customer relationship manager). After all, pursuing new leads while maintaining close contact with previous clients takes precious time.

If there’s any piece of software that’s supposed to be integral to an agent’s success, it’s their real estate CRM (customer relationship management system). After all, pursuing new leads while maintaining close contact with previous clients takes precious time.

But with hundreds of real estate CRM options — some free and some costing thousands of dollars a month — how do agents know which will be the best product for their business? Are these tools investments or expenses?

Inman surveyed agents and brokers about whether they use a real estate CRM, which one they chose, and how they feel about the choice they made. 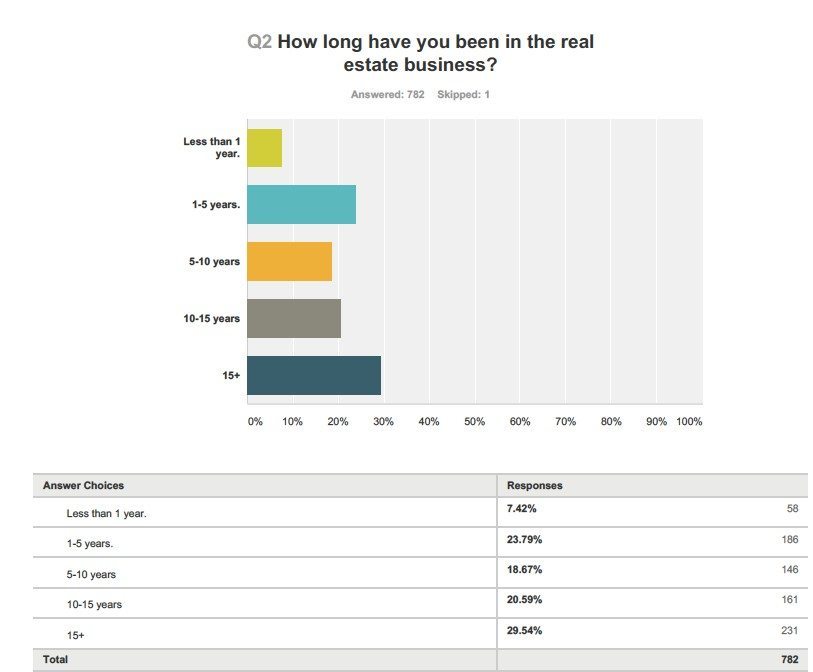 More than two-thirds (71.5 percent) of respondents said they use a CRM. The top five CRMs that respondents use, in descending order of popularity, were Top Producer, Market Leader and eEdge; Contactually and Realty Juggler were tied for fourth place. 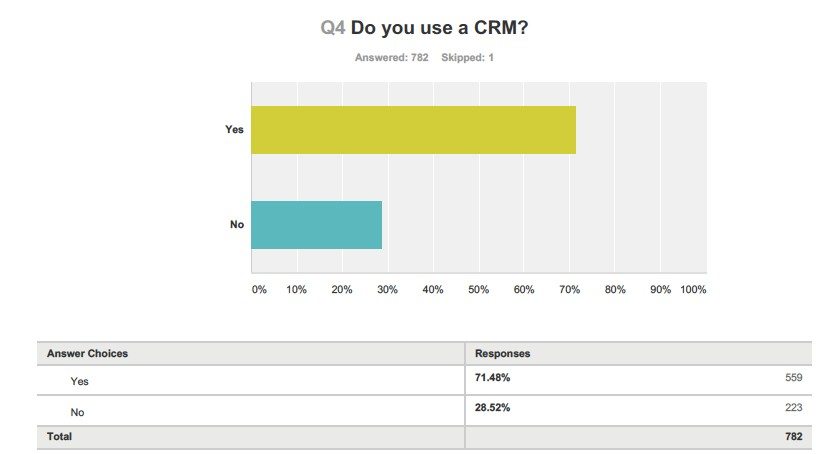 Three features were listed as important to more than half of respondents who selected their own CRMs — contact organization (61.2 percent), activity management (56.5 percent) and ease of use (50.3 percent). 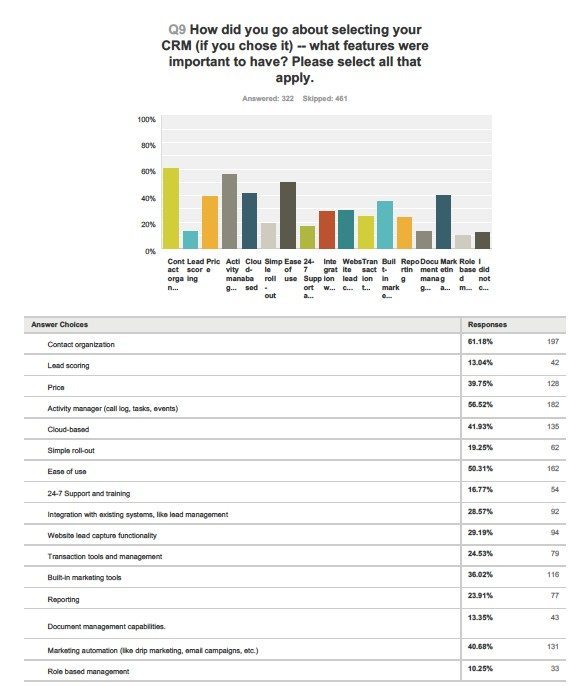 Contact organization was also listed as the feature that 25.9 percent of respondents like most, followed by activity management (15 percent) and ease of use (12.8 percent). And several respondents (10 total) said they couldn’t think of anything they liked about their CRMs. 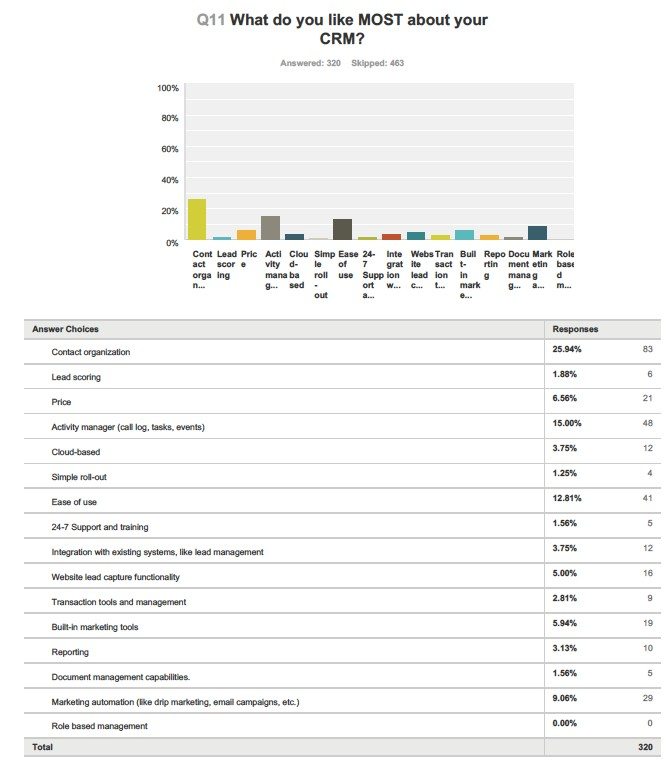 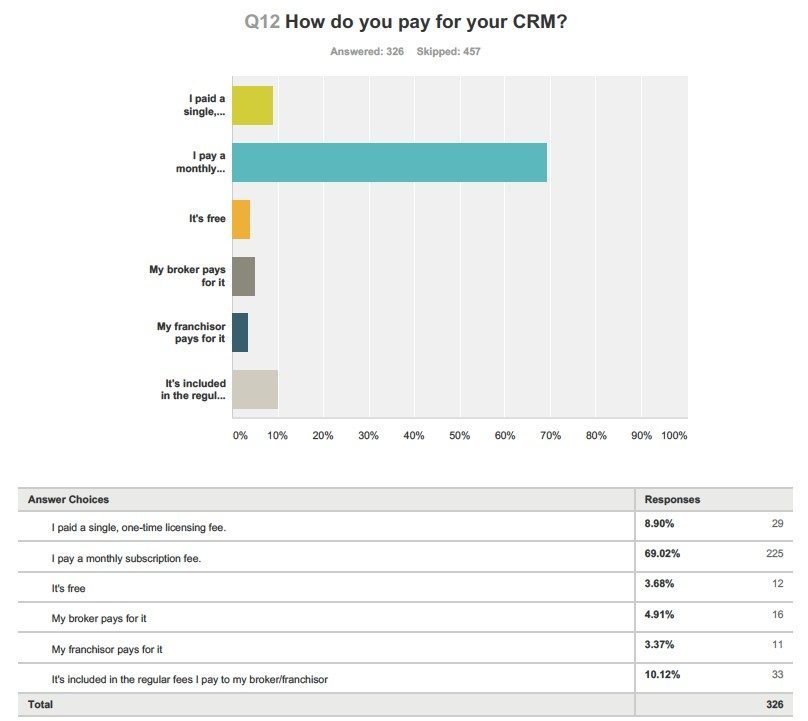 And how much does the typical agent pay for a CRM? Answers ranged from a low of “free” to a high of $26,400 per year. The median respondent investment was $600 per year, or about $50 per month.

Most respondents (84.1 percent) said they manage their own CRM. Others have an assistant to manage their CRM (11.4 percent), or their brokers manage the CRM (4.5 percent). 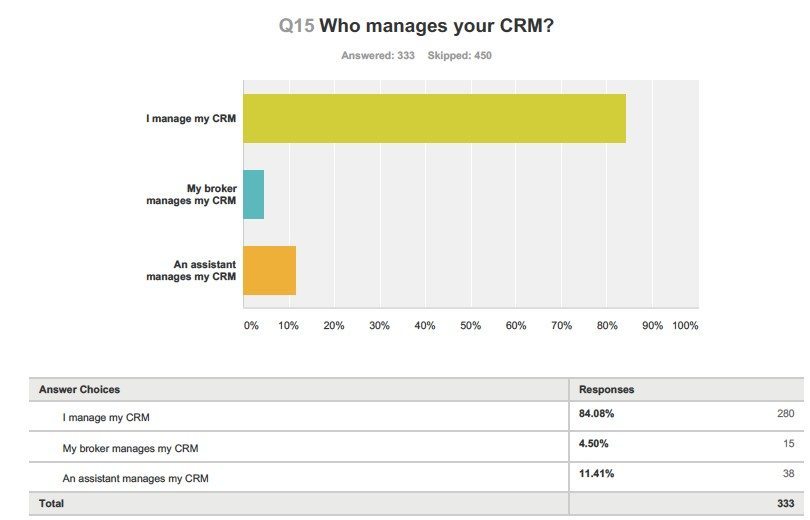 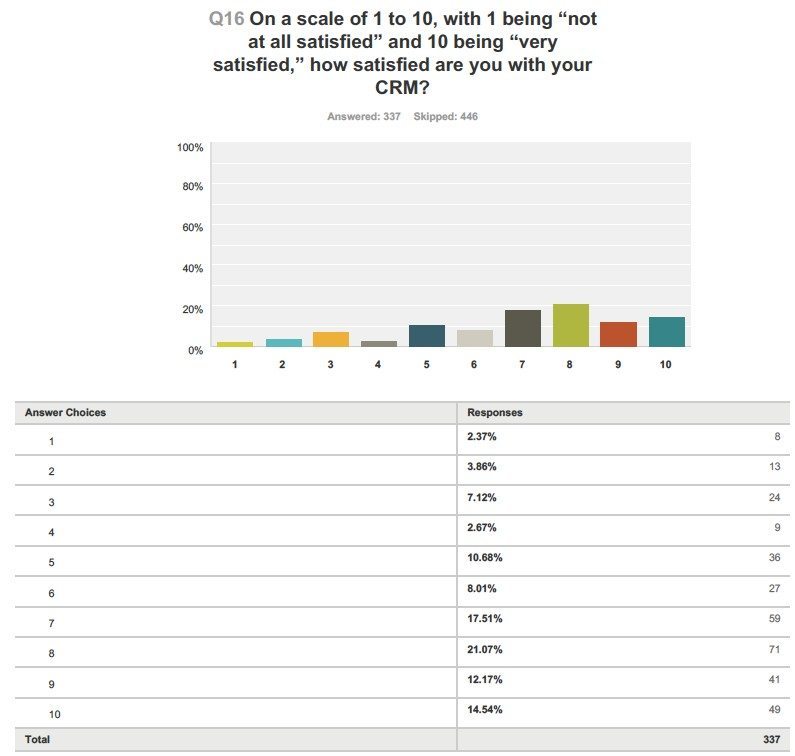 A little more than one-third of respondents who use Top Producer (38.7 percent) said they thought the CRM rated an 8, 9 or 10 out of 10 for satisfaction, with 1 being the lowest and 10 being the highest.

“I can track the whole transaction from lead to close,” said one respondent. “I can group contacts by transaction. It integrates with other lead management sources.”

“I like being overly organized, and this is a great tool,” said another.

“I don’t like how much it costs, but it does more than any other I have found,” said a third.

“While trying other CRMs, I keep going back to Top Producer. It’s not perfect, but it keeps getting better,” said another.

“It’s crap,” said another. “Reports are inadequate, activities and contact modules do not integrate adequately — cannot even do simple, common tasks such as filter a call list and download or print it out. Most tasks take 6-8 clicks to search, open a lead and update it. Seriously?? What is this, 1987?”

“It has a lot to offer but feel like it is not that easy to use,” said a third.

“Trying to like Top Producer, but it’s complicated,” said a fourth.

The next most popular CRM, Market Leader, had 18.4 percent of respondents give it an 8, 9 or 10 for satisfaction.

“For someone who never used a CRM or knew what one was, I found this system to be very easy to input contacts, set up drip campaigns and see what properties they were viewing from my website,” said one respondent. “This CRM allows clients who contact agents from sites like Zillow, Trulia, etc., to automatically flow into the database.”

“It does everything my team needs it to at this time — it’s still smarter than we are about online marketing!” said another.

An equal number of respondents who use Market Leader — 18.4 percent — ranked it a 1, 2 or 3 on the satisfaction scale.

“It is great for agents who are starting out but not longtime agents who want more marketing options and capabilities and are more tech-savvy,” said one respondent. “The website options are horrible compared to some of the options that are available in the regular market — meaning non-real-estate-focused CRMs.”

Another respondent offered a numbered list of complaints with Market Leader: “1. Can’t search or select on any Address field; 2. Primary and secondary source field is not editable; 3. Can’t select contacts based on first letter of last name. In general, it is a marketing system, not a CRM.”

For eEdge, the proprietary CRM affiliated with Market Leader but offered exclusively to Keller Williams agents, less than one-quarter (22.2 percent) said the CRM is an 8, 9 or 10 on the satisfaction scale.

“Ease of use, comprehensive content, premade campaigns, price” listed one respondent when asked why eEdge deserved that rank.

“It has many options that I need,” said another. “[I’m] able to grow into it and sometimes feel it’s got too many features.”

“It is a great system, but it could always be improved,” said a third.

Still, 16.7 percent of eEdge users who responded ranked it a 1, 2 or 3 for satisfaction.

“Provider won’t allow us to remain online for more than 10-15 minutes at a time — constantly having to log in,” said one respondent.

“I do not feel eEdge is easy to use and does not display contacts in a user-friendly format,” said another. “Too many email drip campaign options, too many fields displayed in entering a contact. They do not keep it simple in my opinion.” 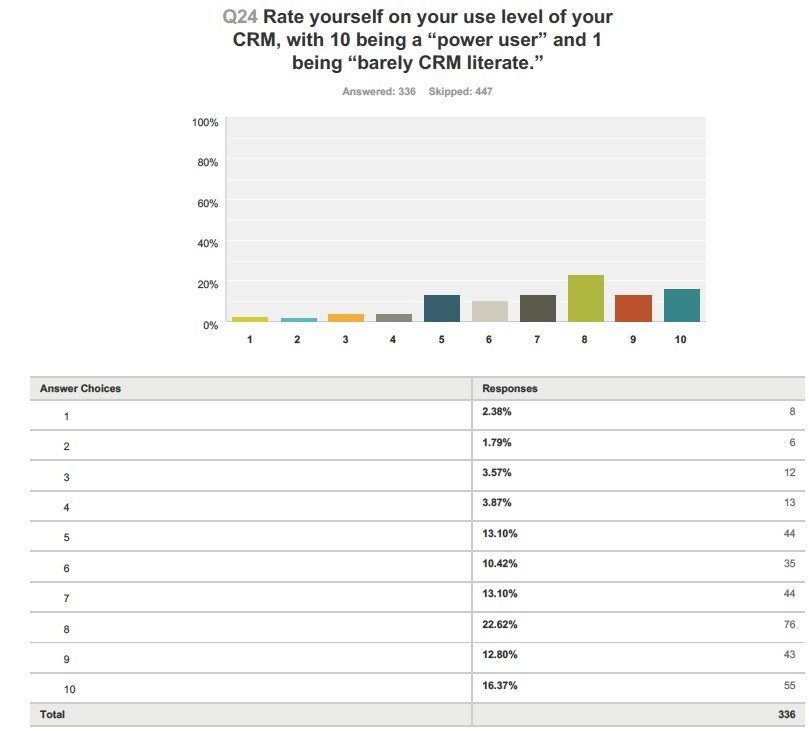 When asked what features they wished their CRMs would add, respondents listed more (or better) integration with Google, lead integration or lead generation services, calendar functions and more customization.

Most respondents (78.2 percent) said they consider their CRM to be an investment rather than an expense. 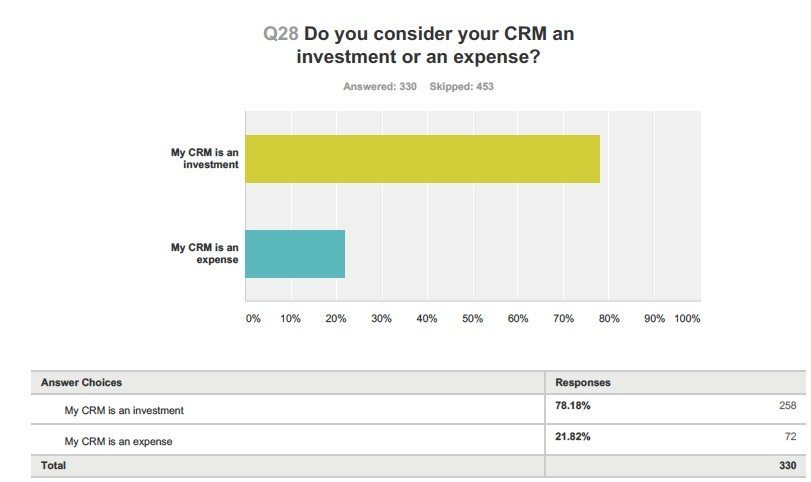 “It’s necessary to keep me organized, so not just an expense,” said one respondent.

“It is an investment,” said another. “Without my database, and a way to track and stay in contact with my database, I would loose 90 percent of my business.”

“I expect an ROI from an investment,” said one. “A CRM is simply a tool.”

“It is an expense and not an investment because it requires an investment of my waking hours to get myself familiar with its functionality,” said another. “I feel like I shouldn’t spend my time doing that kind of admin work.”

“It costs money; it’s an expense,” stated a third.

Nearly three-quarters of respondents (72.9 percent) said their CRM offers features that they don’t use. 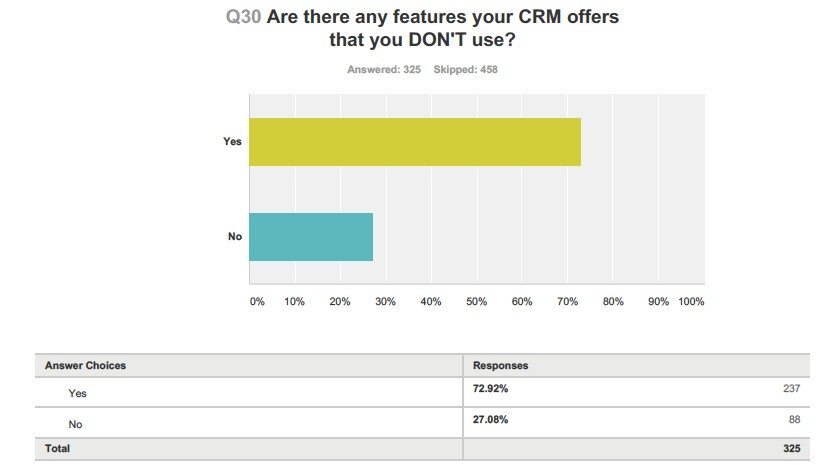 Those respondents said that marketing, email and drip campaign tools were the most common tools they did not use.

A little more than half of respondents (55 percent) were trained to use their CRMs; the remainder (45 percent) said they were not trained. Of those who were trained, they were nearly equally split among vendor training and in-house training.

When asked what advice they had for colleagues looking to invest in an CRM in 2015, respondents had a lot to say.

“Figure out how you will use it in the first year,” said one. “Forget about all the bells and whistles it offers unless you will use them immediately.”

“Just know there isn’t a perfect CRM system out there,” said another. “Adapt and use what you need out of a system.”

“Be disciplined and committed to use it, otherwise it is not worth it,” said a third.

“I wouldn’t give them any,” said a fourth. “I come from a different sales world where CRMs are integral to the marketing and sales cycle. The fact that my colleagues haven’t caught onto this fact en masse is a competitive advantage to me.”

More than a quarter of respondents (28.5 percent) said they do not use a CRM. Instead, these respondents cited email, digital calendars, electronic contact databases, email marketing software and other tools in assorted combinations. 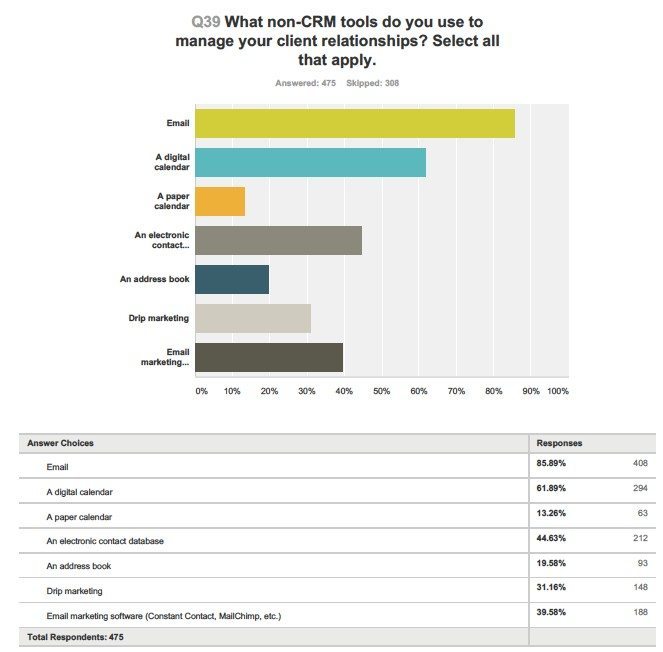 Respondents also mentioned that social media, Excel spreadsheets and postcards or mailers are important tools that they use to grow their businesses.

See the report with more questions and details — exclusively for Select members. 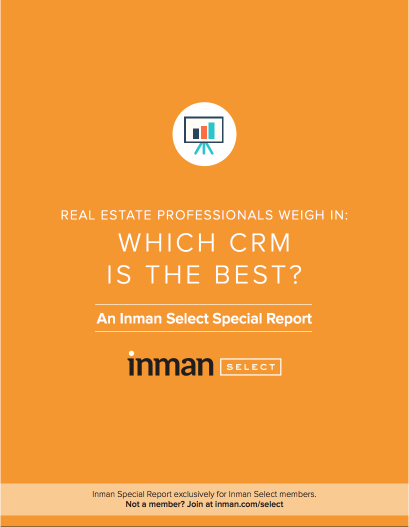 Avi Gupta: 'Ideas abound, but execution separates success from failure'
by Inman May 26
Back to top
Only 3 days left to register for Inman Connect Las Vegas before prices go up! Don't miss the premier event for real estate pros.Register Now ×
Limited Time Offer: Get 1 year of Inman Select for $199SUBSCRIBE×
Inmanpot
Log in
If you created your account with Google or Facebook
Don't have an account?
Create an Account
Forgot your password?
No Problem