by Louis Cammarosano
You successfully shared the article.
Close

This post has been republished with permission from Smaulgld.com. 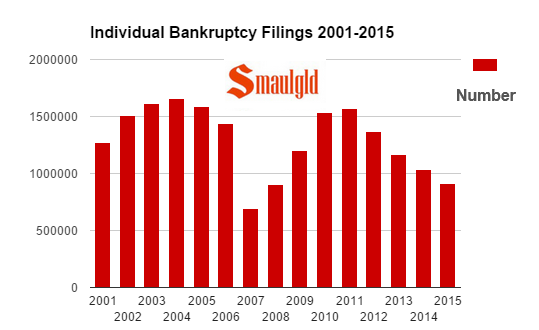 Delinquencies for credit card, mortgage, home equity lines of credit (HELOCs) and auto loans have all declined since 2008 — although auto loan delinquencies have ticked up in recent months.

Low interest rates, relatively low consumer inflation and job (but not wage) growth have enabled an increasing percentage of Americans to avoid delinquent payments and collections.

Yet lower interest rates have also encouraged consumers to take out an increasing amount of consumer debt.

While the decline in bankruptcy filings might appear to bode better economic times, it doesn’t. People go bankrupt when their income and assets cannot meet their outstanding expenses and debt obligations. If debt obligations continue to increase while income doesn’t, bankruptcy is inevitable unless that trend can be reversed.

The housing bust of 2008/2009 caused a spike in bankruptcy filings that tailed off as many consumers repaired their credit and rebuilt their savings (with the help of rising home prices and a booming stock market). For many others, however, the low interest rates instituted by the Federal Reserve since 2009 have encouraged many consumers to borrow and spend and spend.

The pattern of lower bankruptcy filings and increased consumer credit from 2009-2015 is following a near identical pattern as consumer behavior after the dot-com bust from 2001-2008; as consumers come out of bankruptcy, they load up again on increasing amounts of debt.

Economists expecting that second-quarter and second-half 2015 U.S. gross domestic product (GDP) will get a boost from increased consumer spending or a rise in home sales should note that the U.S. consumer, while seemingly better able to keep the collection man at bay and is no longer filing for bankruptcy at record rates, is overloaded with debt and tapped out.

Further, higher insurance, rent and fuel costs and lack of wage growth will keep a lid on spending. Because consumers have borrowed to go to school, buy cars while paying higher rent and insurance premiums as their wages stagnate, new- and existing-home sales remain at depressed levels. 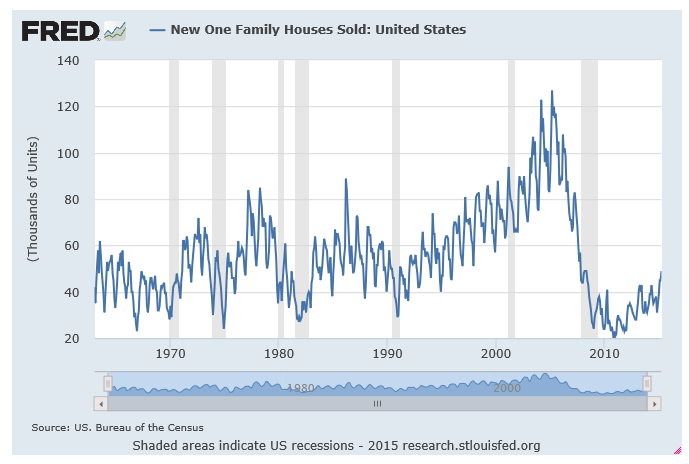 The chart below from the St. Louis Federal Reserve shows the growth in consumer credit.

The massive $3.3 trillion U.S. consumer credit debt is $930 billion less than the value of the Federal Reserve’s holdings of U.S. treasuries and mortgage-backed securities that they “bought” during three iterations of quantitative easing, totaling $4.23 trillion. 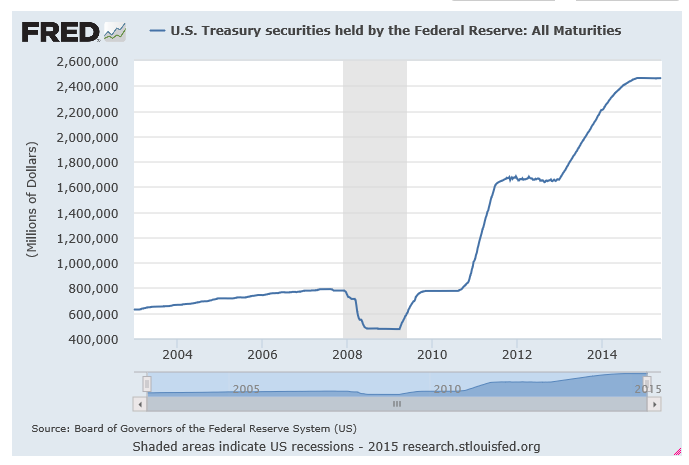 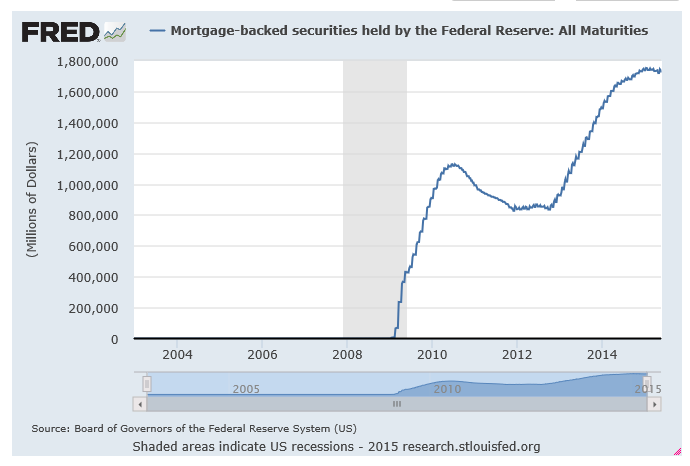 Here are the major sources and amounts of U.S. consumer credit.

As college has become more expensive and more people have gone to college, the amount of debt accumulated to finance a college education has increased. At the end of the first quarter of 2015, the outstanding amount of U.S. student loan debt was $1.355 trillion, up from $363 billion in 2005.

While home sales have stagnated during the past four years, car sales driven by easy credit have surpassed their prerecession peaks. Outstanding auto loans increased 36 percent from $713.5 billion in 2010 to $972.4 billion in 2015. Much of this growth is from subprime borrowers. According to Structured Finance News, the average FICO score of the borrower was 552, and 13 percent had no score!

The average auto loan debt increased for the 16th straight quarter to 3.8 percent in the first quarter of 2015 from last year to $17,508, according to TransUnion.

Credit card debt has declined since the end of the Great Recession in 2009 but has been on the upswing since 2011. 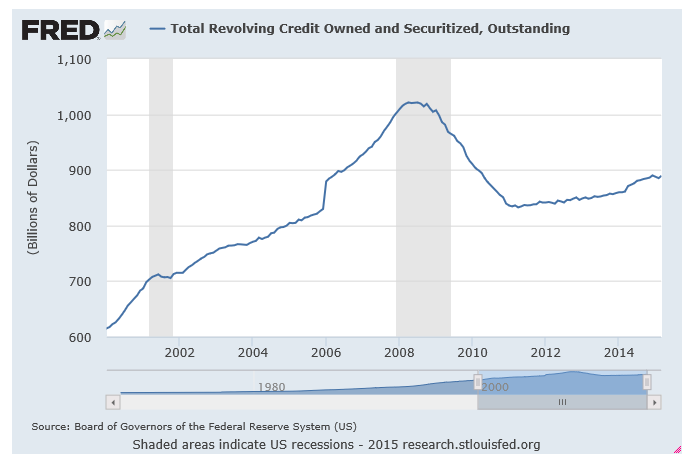 Credit card debt is on the rise again.

As stocks hit new highs, so do margin account balances. At the end of the first quarter of 2015, according to the New York Stock Exchange, margin debt was $476.4 billion, up from from $464.9 billion at the end of February. The current $476.4 billion stock market margin debt is a record far exceeding the prior record of $384.37 billion set in July 2007.

In March 2014, Dallas Federal Reserve President Richard Fisher called the then-record-approaching stock market margin debt “eye popping” and warned, “We must monitor these indicators very carefully so as to ensure that the ghost of ‘irrational exuberance’ does not haunt us again.”

Stock margin debt has increased more than $80 billion since Mr. Fischer made his remarks.

Home sales since the end of the great recession have stagnated, and the homeownership rate has declined. A substantial minority of homes in the United States since 2010 have been purchased with cash. 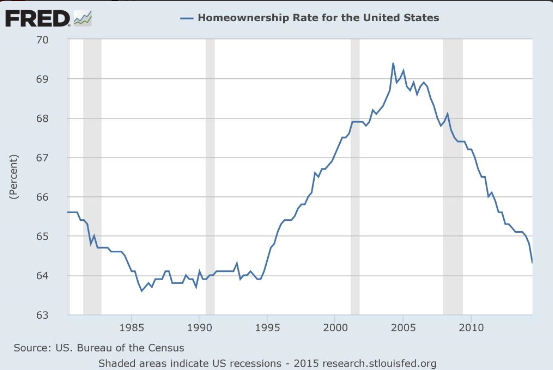 Foreclosures and higher prices have caused a decline in the homeownership rate.

The housing mortgage bubble burst in 2008/09 and caused a tidal wave of foreclosures for a few years. As foreclosures from the housing bubble of the mid-2000s subside a new wave of defaults relating to that bubble may be only the way. In the mid-2000s, more than 10 million homeowners who purchased at the top of the market from 2005-2008 took out home equity lines of credit (HELOCs).

Many HELOCs enter the repayment phase after 10 years, and the HELOCs taken out in 2005 will be coming due this year. Monthly payments on these loans often triple or quadruple. An increase in the size of HELOC payments will certainly strain the household finances of those holding these types of loans and curb their spending and in many unfortunate cases, cause bankruptcy. 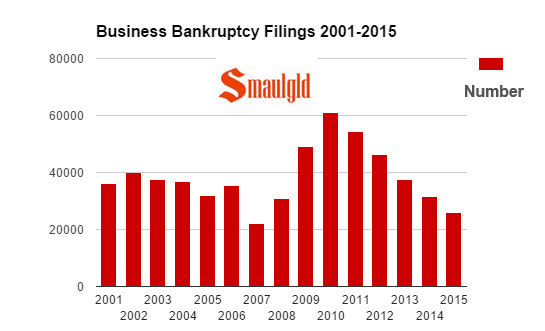 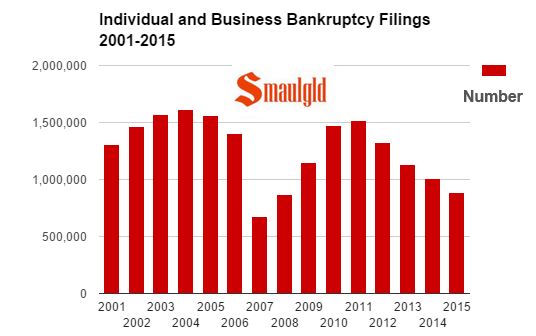 The real estate data land grab that could democratize listings

Startups from the West target multifamily improvements
Back to top
Thousands of real estate pros joined us virtually for Connect Now and you can access the replays with a 2022 bundle.Access Now×
Agent Appreciation Sale: Inman Select for only $85.CLAIM OFFER×
Inmanpot
Log in
If you created your account with Google or Facebook
Don't have an account?
Create an Account
Forgot your password?
No Problem