Sunday evening … Imagine 10,000 years ago on an open steppe, your tribe witness to the rising of an oversized full moon, colored burnt or bloody, then darkening altogether. What could it mean? Famine, drought, flood, sickness …?

It means the Fed’s going to tighten, that’s what. (I’ll miss the celestial show; the Broncos kick off at moonrise. No telling what it means for them.)

This week was thin for U.S. economic data. From overseas, news of deepening slowdown in China and emerging distress (Brazil), but we knew that. Markets jittered, waiting for next week’s flash reports of September’s economy. If weak, next Friday’s employment data will be our last chance for a stay of execution by Fed Chair Janet Yellen.

The biggest story of the week is the hardest to interpret: Chair Yellen spoke yesterday after markets had closed. Beware Fed Chairs speaking late! They do that to minimize damage to markets, giving them a sleepless night to think things over.

The biggest story of the week is the hardest to interpret.

But Yellen was the one who looked exhausted yesterday, nearly fainting during her speech, rather like a shaman struggling to explain to her tribe a dim and rusted moon.

Deciphering speeches by Fed Chairs is an art form. They all occasionally speak at length but intentionally say nothing, and even when they’re saying something, we have to dig content from a mass of cherished academic filler.

“Massive” hardly describes Yellen’s speech. In 11-point type, the text is ten pages long, followed by eleven pages of bibliography and notes, and another nine of graphs. That’s more than filler: Fed Chairs must lay out their reasoning to defend their ground — not just for markets, but to keep under control other unruly Fed officials.

This speech feels defensive, trying to say “don’t argue with me.” Her predecessors kept the Fed governors and regional presidents under control through force of personality — and, more important, through sheer intellect. Volcker was longer on muscle and ultimately faced a revolt, hastening his departure. Why embarrass yourself arguing economics with Greenspan or Bernanke? (Too bad, in the case of the former.)

Yellen’s colleagues are clearly restive. Perhaps half of her colleagues are more eager to lift off than she and have had far too much to say about their disagreement.

“… Two key points: that inflation is now much more stable than it used to be, and that it is currently running at a very low level.”

Right. So, where did the old-time inflation come from, and where did it go?

“… In the late 1960s and 1970s… chronically overheated labor and product markets, the effects of the energy and food price shocks, and the emergence of an ‘inflationary psychology ….'” Where is the missing inflation now?

“… The current near-zero rate of inflation can mostly be attributed to the temporary effects of falling prices for energy and non-energy imports … moving back to 2 percent, accompanied by a temporary decline in unemployment slightly below the median estimate expected to prevail in the longer run.”

That is a declaration of war. The Fed will soon be in the business of raising the unemployment rate, no matter how gentle this line appears: “The precise timing of the first increase … should have only minor implications for financial conditions …. What matters … is the entire trajectory of short-term interest rates.”

In those lines, she dismisses all new-age concerns and sticks to orthodox faith: Nothing here or overseas matters as much as the job market. Wish her and us luck.

Come off zero, fine. Ignore a badly impaired half of U.S. citizens suppressing demand, and profound change in the global economy at your peril and ours. Much as I respect Yellen, instead of this whale-speech, we could have used a discussion of recent Fed errors in forecasting and market rates at huge variance from the Fed’s intentions.

Related to the Fed by our need for good leadership, this week we learned of VW’s ethical perfidy and John Boehner’s resignation. In some ways he is unlikable — but to anyone to the left disliking his politics: Boehner reached the one job he ever wanted, used it to preserve functioning government and has resigned in disgust at extremists.

We must do better than this. 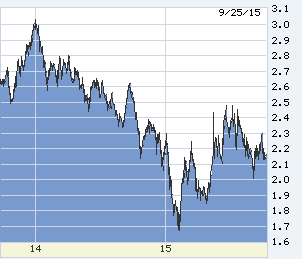 10-year T-note two years back. In denial, or defiance, or trying to tell the Fed something it does not want to hear. 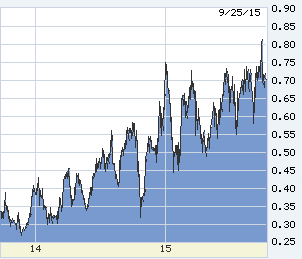 Two-year T-note looks poised for who-knows-what from the Fed. No clue as to the future slope of tightening after liftoff, and just as disbelieving as the 10-year. 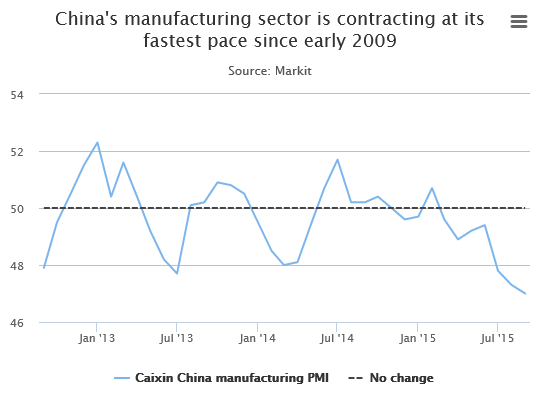 China’s charade continues. Granting wide cultural differences, especially as to the role of government, China’s deception about its actual conditions is hurtful everywhere. A 7 percent or 6 percent rate of growth is inconceivable given this manufacturing performance. 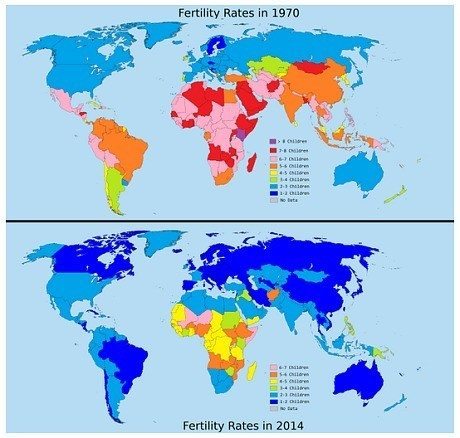 Housing is in a long, slow recovery

Markets do matter to the Fed, but centrality changes from time to time
Back to top
Only 3 days left to register for Inman Connect Las Vegas before prices go up! Don't miss the premier event for real estate pros.Register Now ×
Limited Time Offer: Get 1 year of Inman Select for $199SUBSCRIBE×
Inmanpot
Log in
If you created your account with Google or Facebook
Don't have an account?
Create an Account
Forgot your password?
No Problem