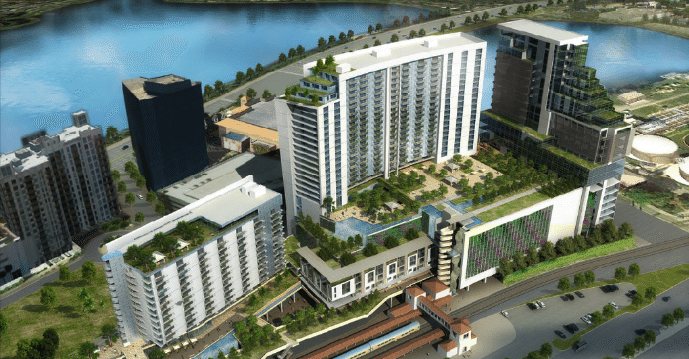 After 20 years of planning, the massive mixed-use, transit-friendly project planned next to Tri-Rail’s downtown station in West Palm Beach is asking for an $80 million tax incentive plan. The project is slated to cost $400 million, and because the project is anticipated to benefit the surrounding community and housing values, the tax incentive would help give developers the green light.

Transit Village is a hotel, office and residential development that would include a 300-unit hotel, 21-story office tower and 25-story apartment building, as well as an additional 13 townhomes. Spanning 6.6 acres, the building would offer additional community-centric amenities and retail space.

Michael Masanoff, the developer behind Transit Village, told city commissioners acting as the Community Redevelopment Agency board that the project’s tax incentive could provide extra peace of mind for bankers backing the development.

Details of how the tax incentive will work are still being determined by city staffers. Funding options for the building could include $80 million in bond incentives or a tax break.

The building’s development was approved last August, as reported by The Real Deal. Proponents of the project say it would help to connect opposite ends of the city’s downtown to improve the lives of residents and make the city even more tourist-friendly.

Construction is anticipated to begin in the first few months of 2017 and be completed in 2020.

According to the building’s summary and overview, Transit Village would include a hospitality tower, residential tower and office tower, and the development would create a “neighborhood place for people to practice their innovative and creative social and business talents.”

The residential tower would include 408 living units and 38 workforce units. Residents of the tower would have access to an indoor and outdoor fitness center, outdoor pool, play area and large balconies with sweeping views.