By Alina Ptaszynski; reposted with permission from Redfin

Luxury home prices inched up 0.8 percent in the second quarter of 2016 compared to last year, to an average of $1.66 million, according to a new analysis from Redfin. The quarterly analysis tracks luxury sales in more than 1,000 cities across the country and defines a home as luxury if it is among the top 5 percent of most expensive homes sold in each city.

After market volatility sent luxury prices tumbling 1.1 percent in the first quarter, they found a footing in the second quarter as the global markets stabilized. While price growth in the high-end has been sluggish, home prices in the bottom 95 percent of the market have gained steadily around 5 percent each quarter for the past two years. 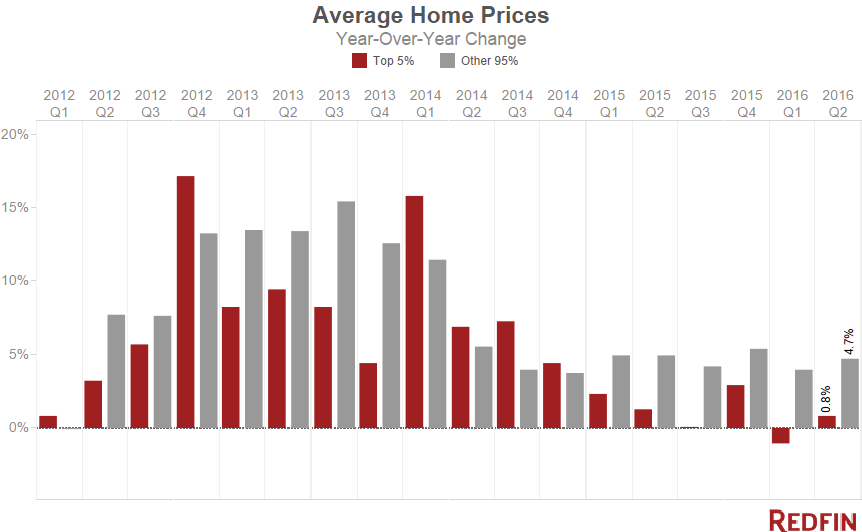 The stock market ended the second quarter rebounding in a big way after seeing the largest two-day drop in equities in U.S. history in the aftermath of Brexit.

sales for homes priced above $1 million increased 10.7 percent in Q2

“For the most part, the housing market can stomach large swings in the stock market,” Richardson said. “But there are markets, like Silicon Valley, that become queasy when the equity market is this volatile. In these areas, homebuyers’ wealth and down payments are more closely tied to stocks. In addition, foreign buyers who normally flock to these cities are also highly sensitive to global volatility. I expect a bit of motion sickness as high-end buyers decide whether parking their money in real estate is a safe place in a rocky global economy.”

Last week, the Treasury Department expanded its investigation into money laundering in luxury real estate. Amid concerns that buyers were using anonymous LLC shell companies to launder money in all-cash real estate purchases, the government is now requiring disclosures of the names of individuals behind these LLCs.

Treasury’s Financial Crimes Enforcement Network enacted the disclosure requirements in March for Miami and Manhattan and is now expanding the rules to include luxury purchases in Los Angeles, San Diego, San Antonio, all of New York City and additional counties outside of Miami. It remains to be seen whether the disclosures will dampen luxury sales in any of these markets.

In many of the luxury market’s bellwether cities like Miami Beach, Boston and San Diego, prices made significant quarterly swings. 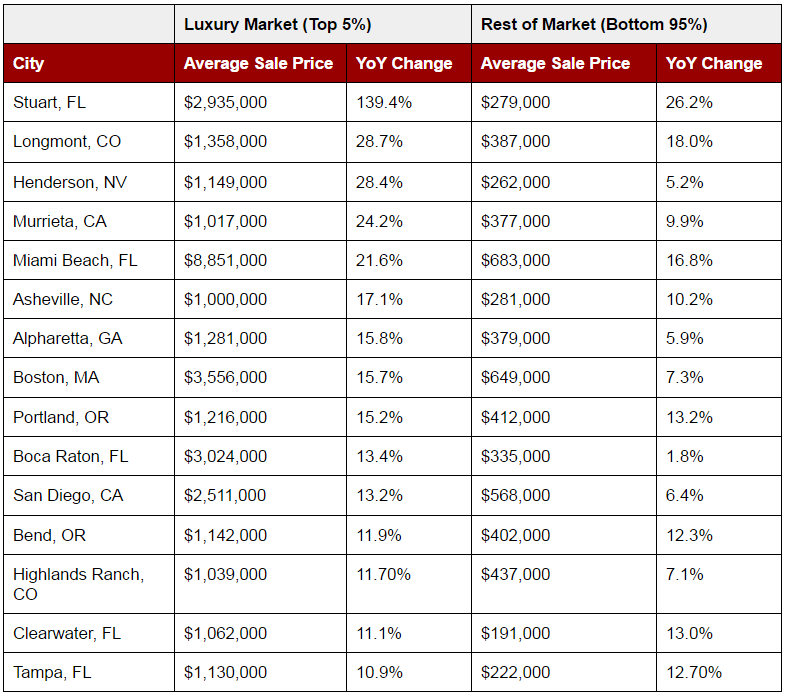 When looking at the biggest luxury winners of the quarter, 10 of the 15 were cities with luxury price points under $1.5 million. Luxury homebuyers in cities like Longmont, Colorado and Alpharetta, Georgia are most likely full-time residents, rather than foreign investor types. With rates hovering near all-time lows, buyers with the means are taking advantage and moving up into higher-priced homes.

San Francisco has made Redfin’s luxury losers list for two straight quarters, with prices for the most expensive homes in the city falling 11 percent compared to a year ago. The market in San Francisco is shifting. Redfin data on June home sales indicate slowing price growth in the city after four years of double-digit inflation. 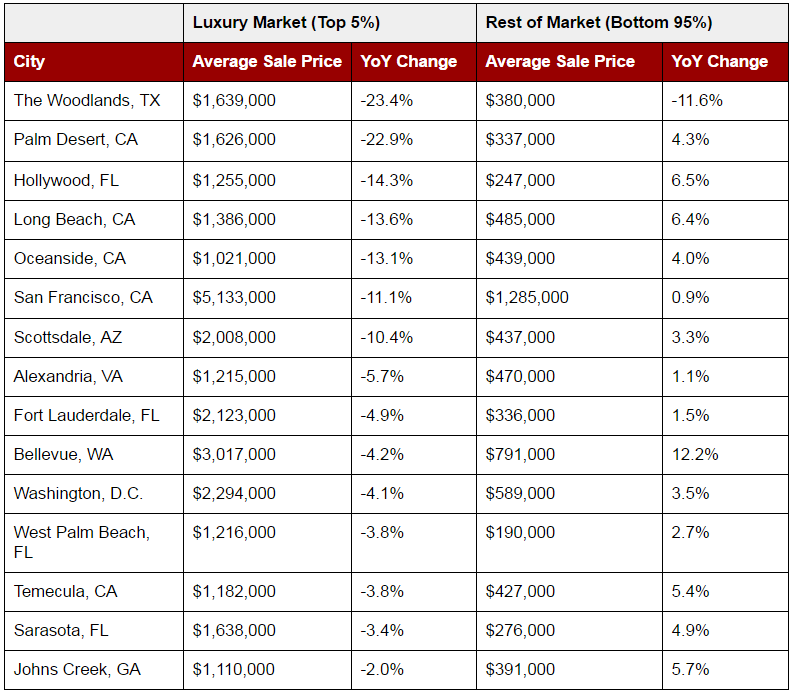 The luxury markets in Washington D.C., and Alexandria, Virginia have also been soft for several quarters. This luxury slump follows an overall price slowdown in the D.C. metro area, but may also reflect political concerns. Redfin agents report some buyers may be sitting on the real estate sidelines until after November.

“With the upcoming election comes uncertainty, as people here are bracing to see how the government will take shape. For buyers and sellers here, it’s less about politics and more about the logistics of the potential turnover in jobs and people moving in and out of the area,” said Dan Galloway, a Redfin real estate agent in D.C.  “Therefore, it may make sense to wait until November, when we know what the future will bring for jobs and housing in D.C.”

Redfin tracks the most expensive 5 percent of homes sold in more than 1,000 U.S. cities and compares price changes to the bottom 95 percent of homes in those cities. Analysis is based on multiple-listing and county recorder sales data in markets served by Redfin. To determine luxury market winners and losers, we looked at cities with at least 30 luxury sales in the quarter and an average luxury sale price of at least $1 million.

The big chill: how to get your luxury clients off the fence

The latest in virtual reality, 360 and video

Jenelle Isaacson talks punk rock and real estate, and where they connect