On the streets of real estate gossip-land, you hear two contrary narratives about New York-based hyper-funded Compass. It is successfully powering through its growing pains, grabbing up market share from the old guard. Or, it may implode under the weight of its spectacular growth.

It is successfully powering through its growing pains, grabbing up market share from the old guard. Or, it may implode under the weight of its spectacular growth.

When I travel the country talking with brokers, invariably Compass enters the conversation with them asking, “what do you hear?” They aren’t trembling, but they probe for hints that the intruder might be tripping itself up.

Whatever the truth, it has roiled local brokers, setting itself up for a purported lawsuit in one big market by a large national real estate company that is freaking out over agent and manager poaching. Compass argues most agents come to them.

For sure, the start-up’s compass is pointed due north as it does the notorious tech land grab. Its sister company (unrelated but akin in hoopla and strategy) Redfin took ten years to get a foothold in markets throughout the US. Compass took a fast and furious approach, side swiping numerous competitors along its three-year road race.

With 950 agents in eight luxury markets, it operates in New York including Manhattan, Brooklyn and the Hamptons; Washington DC including Chevy Chase, Maryland; Boston and Cambridge; South Florida including Miami and Coconut Grove; Southern California, including Beverly Hills, Malibu, Pasadena, Montecito and Santa Barbara; and Basalt and Aspen in Colorado.

Along with 22 high-profile, hip-happening offices, the company is achieving, at least symbolically, an old school measure of success — house for-sale signs are popping up in the markets where they have landed.

But high-flying Compass must be hitting some potholes toward driving a profitable brokerage, which is elusive when you promise mega agent commission splits and tie up expensive office space.

For now, those sorts of extravagant expenses are solved by venture investors who have thrown a crazy amount of money at Compass.

A year ago, Compass raised $50 million at a reported valuation of $800 million. That followed the startup’s $40 million round in July 2014, bringing its total funding to $123 million.

And the word is CEO Robert Reffkin is closing in on another big round. (The company is mum on that.)

But big-funded start ups often create a mess in their pursuit of stardom.

Some early Compass agent recruits in New York City have allegedly become disillusioned — nothing new for any old-school broker. However, one industry insider said it is “all sizzle and no steak, fancy offices, tech that looks better than it actually is, and promises of support that don’t hold up.”

On the tech side, the company says it was “the first residential real estate services company to launch an agent-only mobile app to increase agent productivity, as well as a suite of agent suite tools that offer one-stop property marketing, property value, and CRM resources.” Its Compass Markets product offers a mobile real time market condition report.

My industry insider also charged, “retention is definitely an industry-wide problem; the difference here is they are offering insane splits plus signing bonuses and are still not killing it.”

A Compass spokesperson said, “agent churn is synonymous with the real estate industry. Being a new company we are very fortunate that we have about 99 percent agent retention.”

The company says its pace of growth has not compromised agent quality. “We are extremely selective about who we hire,” said Reffkin. “We only look to bring in the top 10 percent of agents nationwide, and of those we only extend offers to agents who are recommended by Compass colleagues.”

Hmmm, may be a tough argument in court. But it’s also true that agent poaching has been around since the invention of the automobile.

One agent I talked to from the northeast says he was offered a $20,000 signing bonus and a 90/10 split for the first year.

He said that, “the most used word in the meeting was ‘engineer.’ And when the word ‘culture’ came up, they said ‘we look for the top agents in a market, that’s our culture.’”

Competing brokers aren’t upset by the Compass business model. In its infancy, it looked like Redfin, but it abruptly stopped employing salaried agents, paying bonuses based on customer satisfaction and offering discount listing fees shortly after launching.

It started out playing Earthball to sell real estate — now it plays old-fashioned baseball like every other successful U.S. broker.

At the top, star power runs the company. 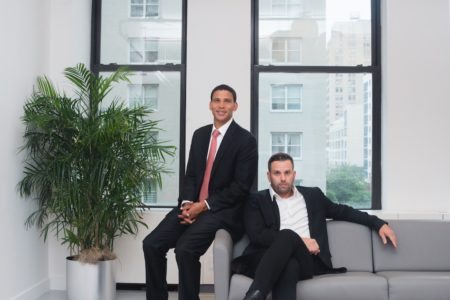 A computer science PhD, founder Ori Allon is an Aussie entrepreneur who was an engineering director at Twitter’s NYC office, after selling his company, Julpan, to Twitter in 2011. Google acquired his patented thesis work, called Orion.

CEO Reffkin worked at Goldman Sachs and before that he was a White House fellow serving as special assistant to the Treasury Secretary. He recently completed 50 marathons, one in each state, to raise $1 million for nonprofits.

Twenty-year real estate veteran Leonard Steinberg is president of Compass, responsible for more than $2 billion in residential sales in New York over the course of his career. His team was recently ranked no. 12 in the nation by RealTrends with $680 million sales last year.

Joining Compass, he sent shock waves through the tight-knit Manhattan real estate club. But those days of Compass shock seem to be over. Just today another Manhattan top producer Toni Haber joined the company, pointing to Compass’s technology and culture for making the move from Douglas Elliman.

Does this pedigree management team guarantee success? Hardly. The real estate startup race track is littered with a pile of wrecked cars.

The company is private so it doesn’t need to share much about its numbers, but it is a master of its own narrative. Not too different than the grand master at telling a convincing story, Zillow.

And the level of fear they elicit from the old guard is the same: often a severe case of the cold sweats in the markets they enter.