Bank of America is in the hot seat today after the National Fair Housing Alliance and nine of its member organizations filed an amended federal housing discrimination complaint against the corporation and its subsidiaries Bank of America N.A. and BAC Home Loan Servicing, LP.

Bank of America is in the hot seat today after the National Fair Housing Alliance (NFHA) and nine of its member organizations filed an amended federal housing discrimination complaint against the corporation and its subsidiaries Bank of America N.A. and BAC Home Loan Servicing, LP.

This complaint is an addition to a previous investigation in 2012 that revealed Bank of America better maintained and marketed foreclosed homes in white neighborhoods than in African-American and Latino neighborhoods.

The 2012 investigation covered 373 homes across eight cities, which included:

“Our economy may be recovering in some communities, but this is a Tale of Two Recoveries,” said Shanna L. Smith, President and CEO of the NFHA in Washington, D.C., of the 2012 case.

“Our investigation shows that Bank of America continues to disregard its REO homes in communities of color. And they have no excuse.

“Bank of America has been on notice of its failure to maintain REOs since the summer of 2009 yet has made no improvement in addressing racial disparities in the maintenance and marketing of its bank-owned homes.”

Smith said the NFHA has met with Bank of America executives multiple times, but the corporation has yet to change its practices. 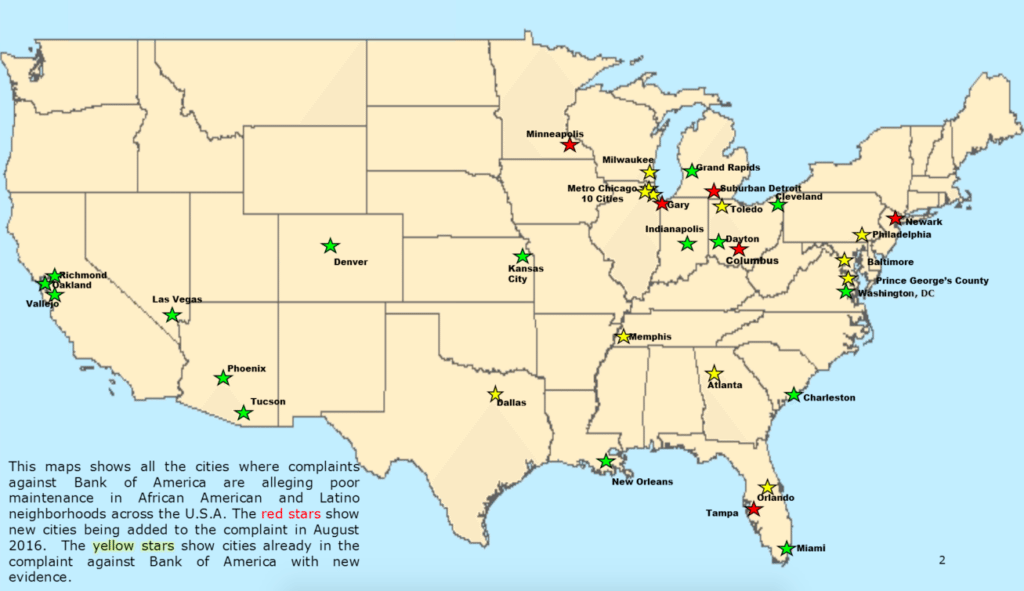 The cities involved in NFHA’s complaint against Bank of America.

NFHA and its nine member organizations allege that Bank of America continues to fail to perform required basic maintenance tasks for foreclosed homes in these middle-and-working class African-American and Latino neighborhoods. 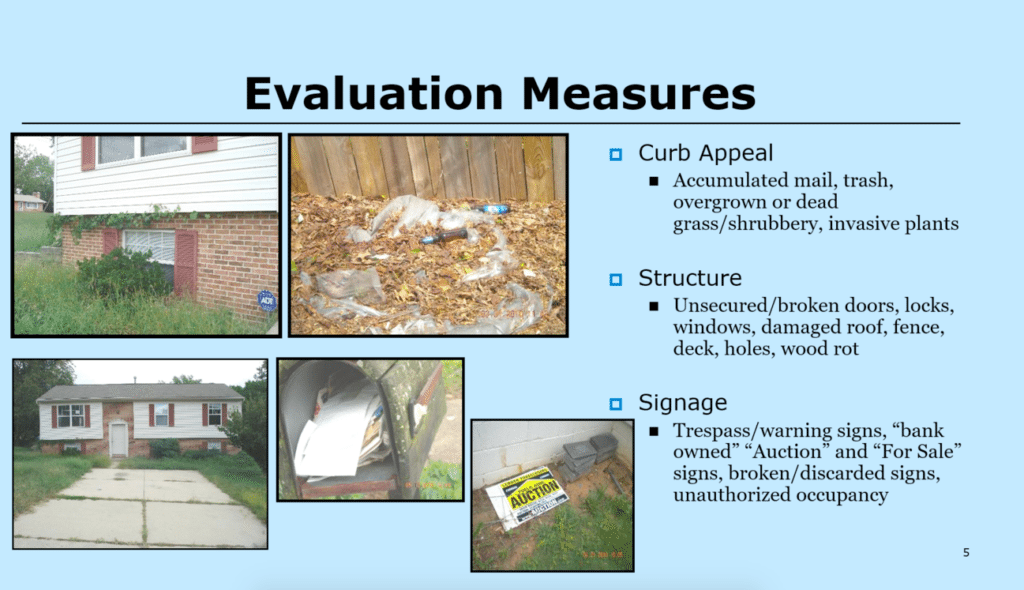 According to Smith, these basic maintenance tasks include mowing the lawn, trimming trees and shrubbery, removing trash, exterminating pests and rodents, and repairing hazards such as uncovered electrical wires.

Furthermore, the complaint alleges that the corporation failed to properly market these homes.

In the examples provided during the webinar, the majority of the homes didn’t have a “For Sale” or auction sign, nor was there any contact information for a Realtor or brokerage.

The alliance’s data back up these claims. The data revealed that 90.3 percent of Bank of America’s foreclosed homes in African-American and Latino neighborhoods had five or more maintenance deficiencies, compared to 57.1 percent of foreclosures in White neighborhoods.

90% of BoA’s foreclosed homes in AA and Latino neighborhoods had 5+ maintenance deficiencies.

Moreover, 80 percent of Bank of America foreclosed homes in African-American and Latino neighborhoods did not have a for-sale sign, according to the complaint.

Smith noted that in the most extreme cases, the foreclosed homes are allowed to go into total disrepair, and the city has to classify them as a “public nuisance” or a “hazardous building.” 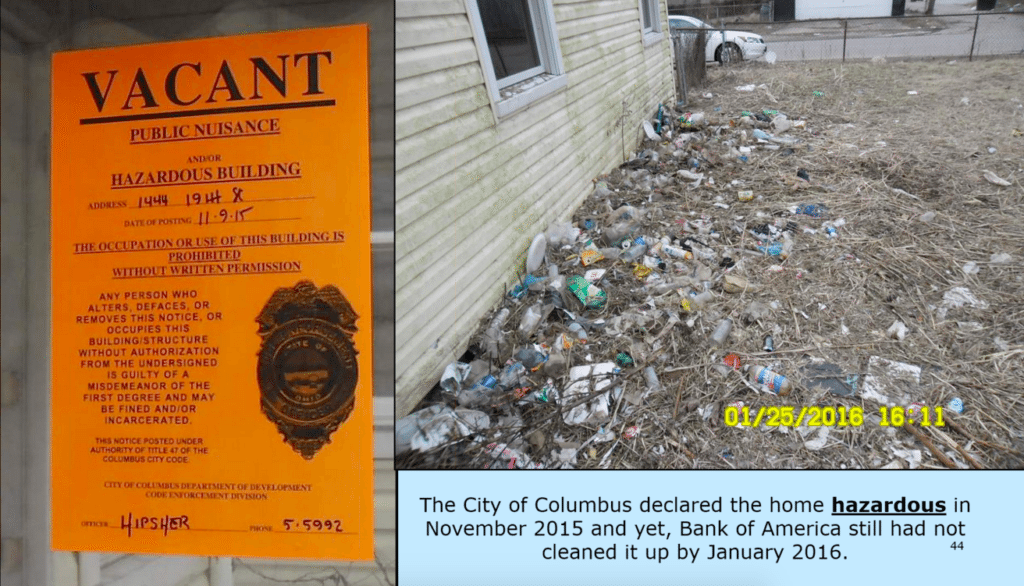 When asked about NFHA’s maintenance claims, Bank of America said the alliance’s methodology is flawed and therefore should not be used to measure the condition of the homes.

“Previous reports issued by NFHA revealed dramatic flaws in their methodology, undermining the credibility of their claims,” said Bank of America in an emailed statement.

“For example, the organization faulted the bank for properties that other entities had the responsibility to maintain and market, expressly declined to consider properties under repair, and included properties the bank had agreed to donate to local groups.”

Foreclosures are a drain on communities

Smith said the lack of maintenance on these foreclosed properties are not only an eyesore, but they also pose serious physical and mental health risks for community members, such as higher rates of stress and anxiety, heart disease and high blood pressure.

For example, Smith showed a home in Tampa, Florida, that had an uncovered pool filled with algae. She said the pool poses a drowning risk for children who find it, and it could also become a hotbed for mosquitos that carry Zika. 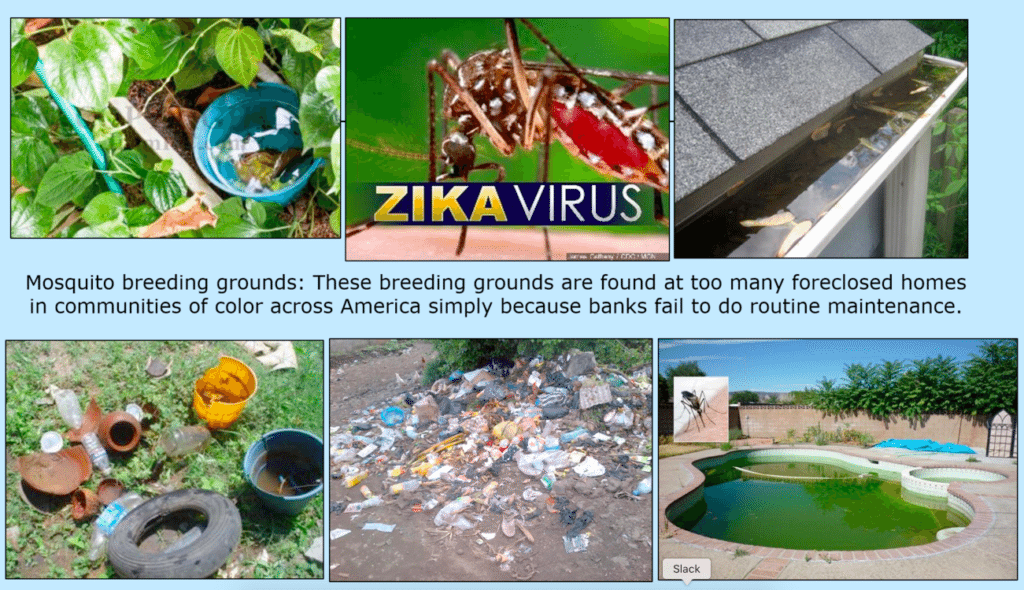 Furthermore, she said, these communities begin to experience a spike in crime since criminals can use the homes for illegal activities.

Lastly, Smith said the abandoned foreclosed homes drive down the property value of other homes in the neighborhood.

According to a study NFHA commissioned by the Woodstock Institute, well-maintained foreclosures drive surrounding homes’ property values down by an average of $5,000 to 8,000.

Additionally, Smith said homeowners won’t be able to get a low-interest-rate loan when they attempt to refinance their home because the bank determines the rate based on comparable homes in the neighborhood.

This also holds true for prospective homebuyers who often look at a home as one of the keystones to building long-term wealth, she said.

Smith ended the webinar by showing examples of Bank of America foreclosed homes in White neighborhoods. The lawns and shrubbery were routinely cut, and there were no broken windows, trash or evidence of pests and rodents. 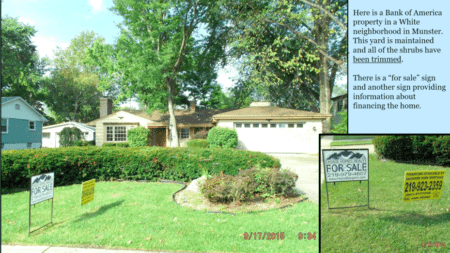 Smith said this is the nail in the coffin for Bank of America because it shows the company knows how to properly maintain homes — it just decides not to do it for homes in communities of color.

“They can ask for funds for a new roof, a remodeled kitchen, etc., whatever allows them to get top dollar on the home,” said Smith. “It’s [about] if they want to. If they want to do it right, the money is there.”

Bank of America says they “strongly deny NFHA’s past allegations,” and that they have a “strong track record and uniform policies for properly maintaining and marketing properties.”

Furthermore, Bank of America says the condition of a property is ultimately not dependent on them, but on the mortgage investor holding the property.

“The disposition of a property is also dependent upon the requirements of the mortgage investor holding the property. For example, Fannie Mae and Freddie Mac immediately accept the foreclosed property and take over the maintenance and marketing of it,” said BoA.

“On the other hand, FHA/HUD properties must be put into “conveyance condition” prior to being turned over to the government agency for marketing. Repairs can be extensive, expensive and time-consuming, and vandalism sometimes sets the project back and can greatly extend the time leading to conveyance.”

The NFHA complaint is not the only discrimination leveled against Bank of America.

In 2013, the U.S. Department of Labor alleged that BoA discriminated against black job candidates, and it had to pay $2.2 million.

Also, former managing director Megan Messina filed a gender-bias suit against the corporation in July of this year.

Messina claims women, herself included, were consistently paid less than their male counterparts who held the same position. Furthermore, she said her supervisor consistently excluded her from emails, meetings and get-togethers.

This story has been updated with comments from Bank of America.

View the webinar slideshow and read the full complaint. 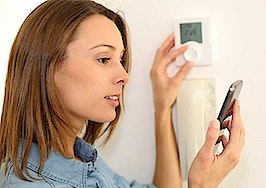 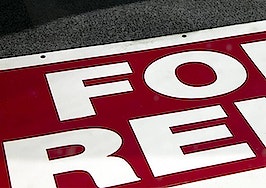 Hedge funds and rental houses: The beginning of the end of a bad idea