Realogy, the company that operates some of the biggest brokerage brands in real estate, is in the midst of CEO succession-planning — but even though that big project can often derail focus, the company reported revenue growth and a significantly smaller net loss in its earnings call for the first quarter of 2017 (Q1 2017) today.

Realogy, the company that operates some of the biggest brokerage brands in real estate, is in the midst of CEO succession-planning — but even though that big project can often derail focus, the company reported revenue growth and a significantly smaller net loss in its earnings call for the first quarter of 2017 (Q1 2017) today.

Realogy’s revenue “was $1.20 billion, an increase of 6 percent as compared with the first quarter in 2016, driven by transaction volume increases at the Company-owned brokerage segment (NRT) and Realogy Franchise Group (RFG),” the company reported. And although operating expenses were higher in Q1 2017 ($1.23 billion) than in Q1 2016 ($1.2 billion), tax benefits and equities offset the expenses to a net loss of $28 million in Q1 2017, compared to $42 million in Q1 2016.

The company said this was to be expected as it embarks on initiatives to retain and recruit top agents and acquire strategic brokerages. 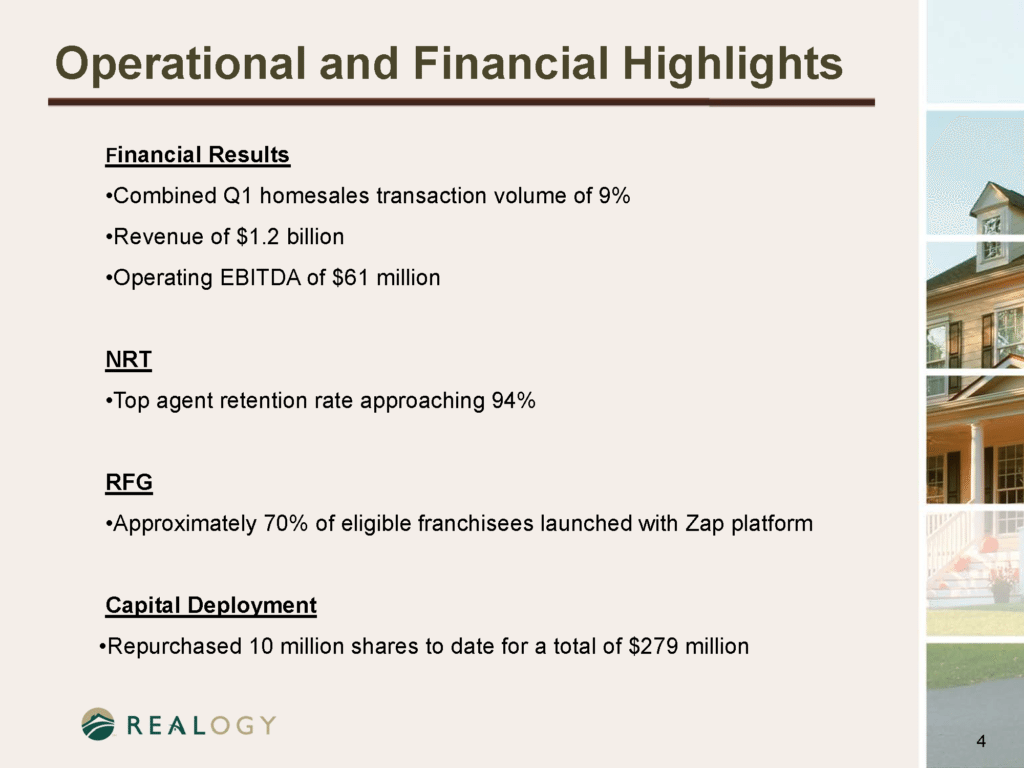 Realogy CEO Richard Smith said in an earnings call and a statement that Realogy’s priorities include increasing agent productivity and recruiting.

“We also made good progress on our recruiting initiatives intended to increase the number of productive sales agents at NRT and retain a higher percentage of our top-quartile agents,” noted Smith, after discussing the strength of the housing market in Q1. “While these actions will result in near-term moderate pressure on margins, we anticipate that over the medium term they will be additive to revenue and earnings at NRT as well as other Realogy business units that benefit from NRT’s transaction volume.”

RFG and NRT sides and volume 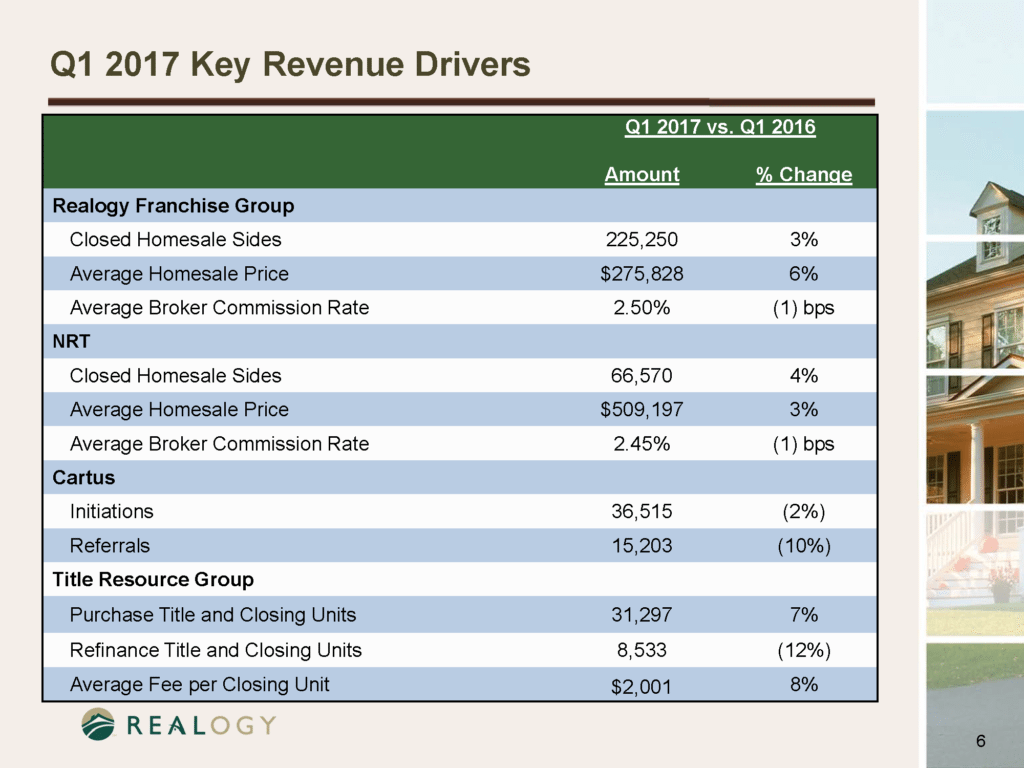 “The high-end volume in the $2.5-million and above price range grew 10 percent year over year,” he added, “half from sides and half from price.” 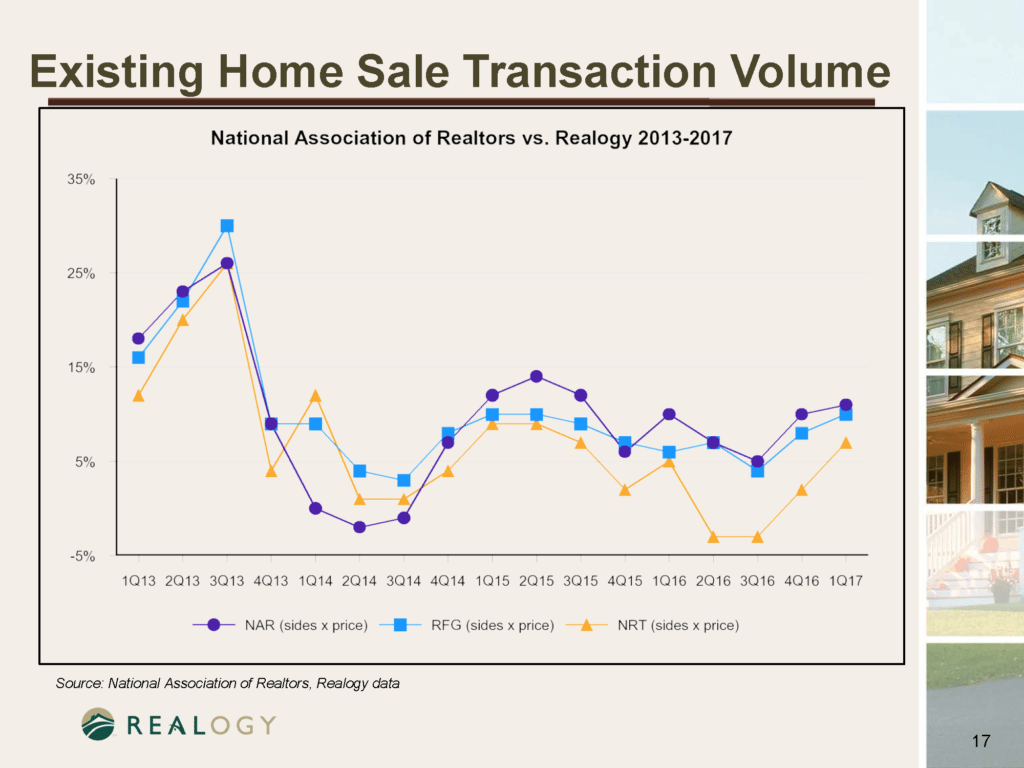 On March 17 in a proxy letter to shareholders, Smith wrote the following: “NRT’s performance in 2016 was impacted by strong competition for agents and soft demand at the high end of the housing market in the markets it serves.”

That soft demand seems to be solving itself, so what is the company doing about the competition for agents?

“The distinct advantage we have is our program is targeting productive agents who will be productive with us much faster than an agent with a competitor. So you can consider that the revenue those agents produced has been incremental to us.”

“The agents we’re recruiting are productive agents with much higher side production than you might consider,” said Smith in the earnings call. “Many of our competitors are recruiting entry level with no production.”

Therefore, Smith said, Realogy expects its recruited agent to perform at the same level as they did for the previous broker “or even better through their affiliation with us.”

The company reported an agent retention rate of 94 percent. Asked in a question-and-answer session how he felt about it, Smith said, “higher is good.

“You don’t want it to get too high, however,” he added. “There is a cost to those high retention rates. We manage in the context of the return on that investment and we’re pretty comfortable where we are right now.”

Keeping the focus on agents is not cheap, of course — it’s increased the company’s corporate expenditures.

“More support to the agent is a better value proposition,” Smith noted. “Support that may be in the form of better improved marketing, better technology — just better values.

“The most important one on the horizon is our new education platform, which we have every reason to believe will increase productivity on the part of not only entry-level agents but also productive agents.” That’s coming later this year, he added.

The average RFG homesale brokerage commission rate was 2.50 percent, down from 2.51 percent in Q1 2016, and NRT’s slipped to 2.45 percent from 2.46 percent. Efforts to keep top-producing agents are having an impact on brokers, but Realogy is hopeful that the Zap platform is going to help boost productivity and alleviate some of that loss for its franchisees.

“The Zap platform represents a significant investment in the success of our affiliated sales agents and is at the forefront of our efforts to help franchisees increase profitability,” said Smith, adding that performance metrics on Zap are on the horizon.

“Zap by design is going to level the playing field and make it possible for small- to medium-sized franchisees see productivity gains,” he added.

Mortgage rates, housing prices and the market in general are looking better-than-expected — including some areas of new construction, Smith noted.

However, there are two elephants in the room: challenging mortgage underwriting criteria and housing inventory.

“The current inventory represents a 3.8 month national average supply, which is well below the 25-year average of 6.1 months,” Smith noted. He named inventory and underwriting criteria the most challenging “headwinds” that the industry is facing at the moment.

“I can sell my house but it’s very difficult for me to move up if I’m a move-up buyer,” he added later in the call. “We see that in a number of markets, so we need credit underwriting standards to abate and more new construction.” 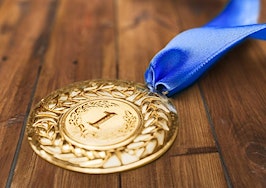