Selling a home “as is” sounds simple enough, right?

A buyer can conduct whatever inspections or due diligence they want, but the seller is not going to make any repairs. The buyer can either take it or leave it.

The property is what it is.

This is where confusion and misunderstandings can occur in an “as is” scenario.

Recently, some relatives of mine who reside in another city sent me one of those “911” texts — “Hey, can we give you a call? We are in the process of buying a home and wanted to talk to you about it. The whole thing has been a little weird.”

When we spoke, they relayed the real estate transaction from you-know-what.

They explained that they were under contract on this property, and the inspections had revealed more than what they bargained for.

Although they knew that the home needed some cosmetic updates and were planning on doing some renovations in that regard, they were not prepared for systems and structural issues such as polybutylene plumbing, a Federal Pacific electrical panel and an HVAC system on its last leg.

These — and a host of other things — added up to a very expensive repair bill.

When they discussed the inspection with their agent and expressed their desire to address the issues with the seller, the agent said, “well, you know the home is ‘as is.’”

Excuse me? What did you just say?

It turns out that the buyers didn’t realize what they had gotten into. I immediately asked if their sales contract referenced that the home was “as is,” but they didn’t recall seeing that; and they said they weren’t told upfront, nor it wasn’t mentioned in the MLS remarks.

The issues uncovered during the inspection were not made clear on the seller’s disclosure document, which they reviewed before making the offer. In fact, there was no mention of any polybutylene piping.

The home was owner occupied and previously renovated, which left the buyers more confused and nervous by the lack of transparency regarding the home’s condition. The sellers ended up giving a concession toward closing costs because of some issues, but then the appraisal came in at $13,000 under value.

By the way, did I mention the sellers were taking the dishwasher?

Just another day in real estate.

In any case, this is exactly why selling a home “as is” can be a confusing proposition.

Just because sellers don’t want to address repairs doesn’t mean they’ll be given a get-out-of-jail-free card: They have to deal with the issues in some way, shape or form before the end of the transaction.

Nondisclosure is not an excuse either.

Here are six tips for selling a home “as is” that will prevent confusion during the transaction.

Even if you are selling a property you don’t know much about — perhaps something you inherited — it’s in your best interest to learn its true condition so you can plan accordingly. Prices are arbitrary until all due diligence is completed between the buyers and their lender with regard to inspections and an appraisal.

As a seller, wouldn’t you rather discover issues on your own before listing the property instead of feeling the pressure of an executed contract with timelines and deadlines in the mix?

Buyers get cold feet and walk away from the transactions sometimes, and you don’t want that to happen because of an inspection.

A prelisting inspection will disclose information to the buyers upfront in addition to a seller’s disclosure, which allows you to share any pertinent details about the property; If the buyers know upfront that there are issues like old plumbing or termite damage, they’ll be less likely to run for the hills.

Once you have been able to assess the property’s true condition from inspections, you should obtain estimates from reputable contractors so you have an idea of the costs a buyer is going to incur.

Remember, in a buyer’s eyes, the cost of everything is always triple what it really is. Having costs available to buyers upfront can eliminate the risk that comes with forcing the buyer’s agent to gauge costs.

I experienced a situation like this before. The seller had a damaged roof that needed to be replaced, so we obtained a quote from a roofer before putting the property on the market. It was a good thing that we did because we received feedback from a buyer’s agent who said their buyer liked the house but didn’t want to spend $20,000 to repair the roof.

I asked where that number was obtained from and there was no basis for it, so I shared our estimate, which was for $6,000.

Make these estimates available to the buyer along with the inspection report. Will the buyer get their own inspections and contact contractors of their choosing to obtain their own estimates? Absolutely. But you should give them a baseline to work from so they’re not sticker shocked.

Now that you have estimates based on the inspection report, talk to your agent about taking care of repairs before putting the home on the market. While you want to sell “as is,” a couple renovations might help you sell faster.

For example, it can be much harder to sell a home with an old roof or damaged plumbing. While a buyer may be willing to take on some things, too many major concerns are often a deal breaker unless a seller is willing to offer the home well below market value, which is highly unlikely.

Make sure you price the home to account for the work needed, because that is how a buyer is going to think while they’re deciding what to offer. They will be mentally adding up everything that needs to be done — both cosmetic and structural.

The home may be livable in the seller’s eyes, but no matter how livable it may be, the buyer isn’t going to put up with outdated or damaged elements for long; Although the water heater may be working just fine, for example, you will need to account for the fact that a buyer will likely have to replace it shortly after closing.

Be forthright in referencing inspection reports and estimates that are available for review.

Although you may indicate that the home is being sold “as is,” buyers may still want to negotiate this. Be prepared to account for the items that need fixing, whether it be in the form of a price reduction, a closing cost concession or agreeing to address something that could prevent the buyer from obtaining homeowners insurance, such as replacing an old electrical panel or plumbing.

The phrase “as is” tends to set off an alarm with buyers.

What does it mean?

What are the sellers hiding?

Are they concealing something really awful?

Selling a home “as is” is all about eliminating surprise and setting and managing expectations upfront.

Always remember that surprises in real estate are never a good thing. 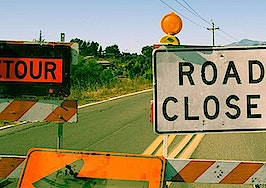 5 snags that can derail a 'done deal' in real estate