New, well-funded real estate tech ventures have reached a fever pitch lately, promising to change the world. But over the years, these grandiose undertakings often sputter or fail and are broken into pieces  — never to realize their promise.

New, well-funded real estate tech ventures have reached a fever pitch lately, promising to change the world. But over the years, these grandiose undertakings often sputter or fail and are broken into pieces  — never to realize their promise.

In June 2015, Nationstar Mortgage Holdings launched Xome to much fanfare, hailing it as “world’s first integrated, end-to-end digital platform for real estate, with the promise of connecting every major touch point in the transaction process, from finding a home to closing the deal.”

Two years later, Xome’s revenue has languished and Nationstar is reportedly shopping the platform around to prospective buyers, according to various sources. In its last earnings call, the company discussed “evaluating” interest in the company.

Its biggest source of revenue has been from acting as a real estate broker, specializing in selling foreclosure listings on behalf of banks in online auctions. And it powers property search platforms for Bank of America’s website and provides services to a leading, unnamed for-sale-by-owner platform.

Nationstar built Xome by combining elements of its subsidiary Solutionstar with Real Estate Digital, a real estate technology provider that Nationstar acquired for $18 million in 2014.

But while Nationstar recently valued Xome at between $1.2 and $1.5 biillion, the platform has not proved to be a game changer.

A cross-sampling of Xome listings.

“Total revenues for Xome declined due to lower revenue from property listing sales and completed service orders,” the company said in a recent filing with the Securities Exchange Commission (SEC).

Nationstar has reportedly enlisted bankers to find a buyer for Xome.

Bray said in a February earnings call that Nationstar had received “significant inbound inquiries about [whether] we would sell Xome and what would that look like,” which the company was taking into consideration.

That was reaffirmed in Nationstar’s latest earnings call, when Bray added that “we’re spending time as we speak evaluating that interest.

“And I would expect we’ll have some updates in the coming quarters,” he said.

The company has come close to offloading Xome before, but at least one deal has fallen apart, sources say. They add that Xome may have limited appeal, in part because foreclosure-related services remain a core part of its business.

Asked about new rumors that Nationstar had found a buyer, Nationstar spokeswoman Kelly Doherty said, “It’s our policy not to comment on market rumors or speculation.” 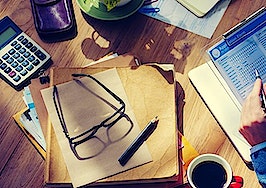 Xome is 'worth a very big pile of money,' said Nationstar CEO in earnings call