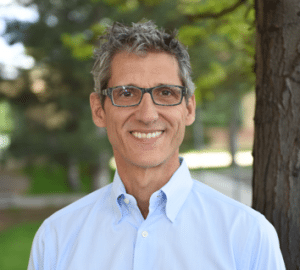 Indeed, prices are back to levels that they hit at the peak of the bubble.

But this time different forces are at play, said HomeAdvisor Chief Economist Brad Hunter in a presentation this morning at the National Association of Real Estate Editors conference. Rising home prices are being driven by “shortage, not speculation.” 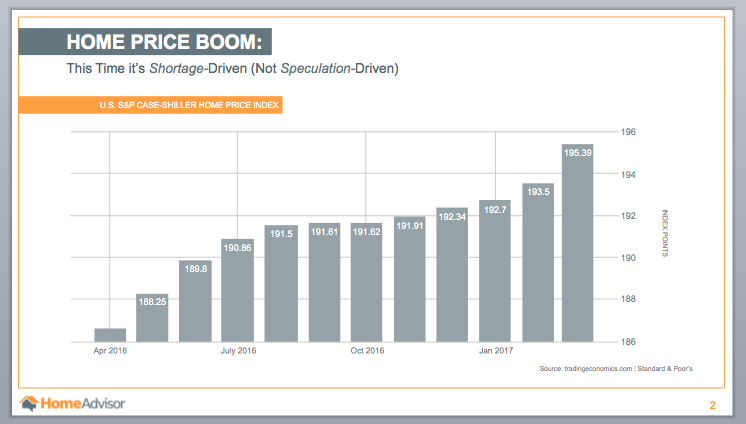 “Spoiler alert: They are feeling stretched.”

A new market dynamic has taken hold, a real estate landscape where 90 people show up to an open house within a six hour period and the seller ends the day with five offers (a real situation that Hunter described), bidding wars are common and multiple offers come in above asking price.

Here are seven trends in the homebuilding sphere impacting the housing market as supply and demand drive up housing costs, existing homes aren’t going up for sale and new construction falls short. 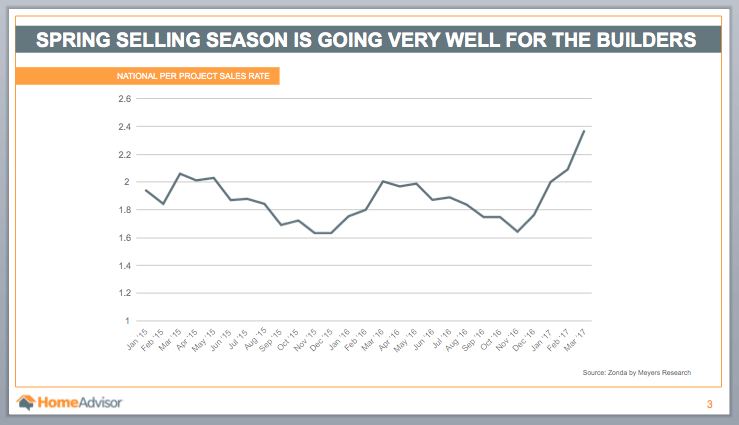 Builders are having a killer spring selling season, with the national per project sales rate through the roof.

2. Limited by lots and labor

But builders are facing their own challenges, namely lots and labor, Hunter said.

That’s because lots are more expensive than they used to be (in many markets, above 2007 levels), making lot supply an issue. In turn, buyers are absorbing those increased costs. And at the same time, most builders have had a hard time hiring skilled labor.

What’s going to put an affordable roof over more heads?

From the buyer or homeowner perspective, Hunter outlined a couple of solutions already happening:

While remodeling spending grows at twice the pace of general retail, home improvement companies are feeling confident (an average of about 9 out of 10) about their near-term future demand, Hunter said. 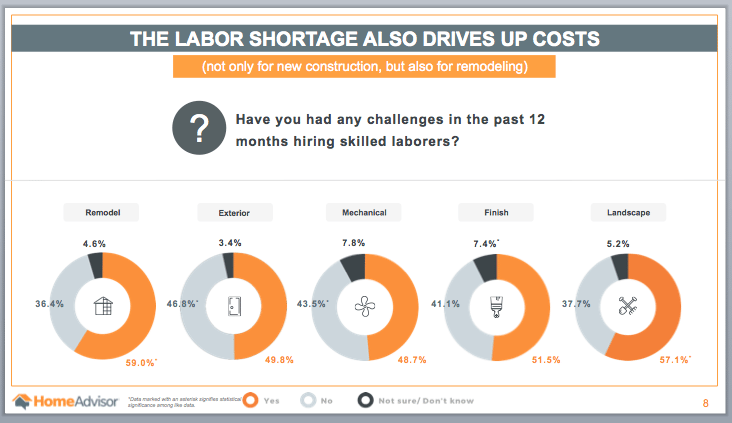 And as we get deeper into the post-recovery housing market, remodeling companies are seeing a boost in discretionary expenditures — kitchen and bathroom makeovers — improvements that “beautify” the home.

“The vibrant lifestyle that the millennials want is the same thing that boomers want. Boomers aren’t dead yet,” she said, prompting chuckles from the audience.

“Every major builder in America is going to be able to build zero energy by 2020,” added Gene Myers of Thrive Home Builders. “This is a boat that’s already left the dock in America.”

Zero net energy structures generate enough renewable energy to match their own consumption. This will happen largely due to regulatory mandates put on builders, Myers said.

Four or five years ago, everyone talked about how millennials were bucking the marriage trend. Would they ever settle down?

Turns out this generation wants the same things as those in the past but is just delayed in reaching that point.

“Millennials are coupling up at the same rate as generations before them,” Hunter said. “They’re getting there later, but getting there.”

That, in addition to millennials’ willingness to telecommute and settle in suburban areas that have their own lifestyle offerings, means that many of them are doing what they have to do to get a single detached family home, even if it’s 30 minutes outside of downtown.

Millennial buyer interest is great for demand but doesn’t help the inventory problem. That comes back to builders, who are going to have to expand beyond the urban core to find lots where they can construct more affordable homes, Hunter said. 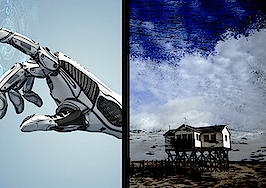 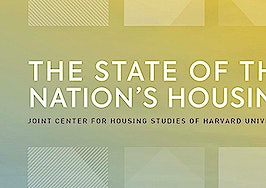 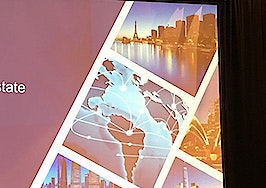