If you’re no longer in love with your spouse, you both are toward the ends of your careers, you’ve regained equity in your shared house and your kids have flown the coop — what’s keeping you in the marriage? Increasingly, the answer for many 60-plus couples is “nothing.”

If you’re no longer in love with your spouse, you both are toward the end of your careers, you’ve regained equity in your shared house and your kids have flown the coop — what’s keeping you in the marriage?

Increasingly, the answer for many 60-plus couples is: “nothing.” In March, a Pew Research report stated that while divorce is becoming less common for younger couples, “so-called ‘gray divorce’ is on the rise: Among U.S. adults ages 50 and older, the divorce rate has roughly doubled since the 1990s.”

Why? And what should real estate agents know about this group of potential homesellers? 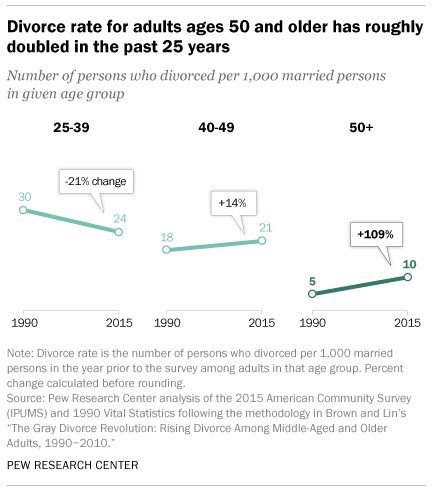 A chart from the Pew Research article about “gray divorce.”

What’s going on with boomer-aged couples?

Experts in the Spring 2016 issue of Family Law Quarterly posited that the rise in divorce can be attributed to (in this order):

“People are living longer, and there’s a longer life expectation,” explained Laurel Starks, a team leader specializing in divorce and author of The House Matters In Divorce The increase in life expectancy can make someone stuck in an unsatisfying or less-than-fulfilling marriage less willing to tough it out at age 60 than they might have been a few decades ago.

And women also initiate most divorces. A 2015 study from the American Sociological Association found that 69 percent of divorces were initiated by women.

So, one theory is that women today are “not stuck like June Cleaver would be,” Starks noted. They have work skills, education and are able — and sometimes eager — to picture themselves living an independent life.

And, Starks added, “they’re standing up for a quality of life. They’re saying, ‘Look, I’ve got another big chapter here, and I am not going to live the rest of my life miserable or in an unfulfilling shell of a relationship.’”

She thinks (and has heard “silver” divorcees disclose) that the increase in the activity load of kids and teenagers today can oftentimes catch parents up in the whirl of sports and organizations to the point where the marriage essentially evaporates, and the parents don’t notice until the kids are gone to college.

“Over time the marriage gets redefined into a family unit, and when the kids are gone, there’s been so much erosion over the years. And they don’t need to stay together for the kids anymore,” Starks explained.

And some experts think that they’re willing to pull the trigger (so to speak) on the marriage right now because they’re in better financial shape than they were five years ago. “One of the things that I find myself talking about with clients is that the same amount of income that went to support one household now has to support two households,” Starks added.

There are also the “hidden costs” of divorce — not just attorneys’ fees, Starks says. “Moving, deposits on apartments; you can’t qualify for the Verizon family plan and you’ve got to get separate plans.”

That meant that during the economic downturn, when couples might already be “underwater” on their mortgages, some of those who wanted to divorce were “literally stuck,” Starks pointed out. “People couldn’t even afford to keep the roof over their own heads, let alone go out and hire lawyers and pay retainers for two. People were cohabitating a lot, just kind of living separate lives.”

And now, she says, she’s helping participants in a lot of those cohabitations “that are finally ripened enough to pull the trigger.”

What should agents understand about this group of sellers?

“It’s much easier to work with this group than it is with a divorcing family with young children in the home,” Starks noted.

“They’ve unloaded the kids off the books; they’re usually at the peak of their careers and making good money,” she explained. “They don’t have strings attached with where they’re going to go. They’re not stuck in a house because of the school district — that’s a big one. Especially when you’re talking about upper-middle class families; they can’t afford to buy a house in the same school district they’re in after a divorce.”

She added that she’s had homes ready to close in escrow with wives and school-aged kids who are still in the house and don’t know where they’re going to go.

“Silver splitters” have oftentimes been planning for years, she said. “They know exactly where they’re going to go, and they don’t even need to be near their spouse because they don’t have custody to share.”

However, Starks added that sometimes these divorces can be more challenging than ones that involve school-aged kids. “The challenge that I do have with this group is when it is a wife who has not worked, who does not know anything about paying bills, about supporting herself, and she’s paralyzed and scared spitless — and husband has been having an affair,” Starks said. “When the husband is springing this on her and now she’s 60 and she hasn’t worked a day in her life, those can be challenging.”

Starks says it’s not unheard of for women in that situation to become “paralyzed” with fear and depression and “just completely dig her heels in.

“If she’s living in the house, she can make it impossible to show the house. She doesn’t show up for signatures; she doesn’t agree to anything — even killer offers way above list price — because her fear and her depression and her insecurity is just paralyzing,” Starks explained.

But when it’s amicable, it can all work well. Lee Arnold, an agent in Fallbrook, California, is currently helping a couple unload the first house they bought together, which they were keeping as a rental investment property, now that they’re splitting up.

And in the property management wing of Arnold’s business, he says he’s seeing more single men and women in their 40s and 50s looking for places to rent — “or they’re merging houses with their new boyfriend or girlfriend, so you see a lot of cohabitation in renting,” he noted.

With the divorcing couple, Arnold says, he’s made a point from the beginning to include everyone and favor no one. “This is not the first divorcing couple I’ve dealt with,” he said. “What I’ve found to be very helpful is to approach them as, ‘I’m not on anyone’s side; I’m here to get you both what you want — to sell the house.’ If I make sure to be straight-up professional, direct about every single thing and be very cut and dried, then it’s really successful, and both parties are receptive to being cooperative.” 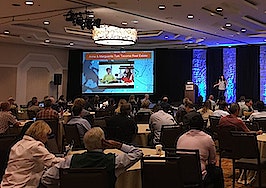 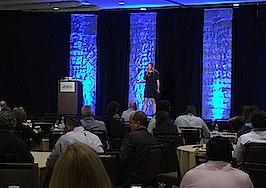 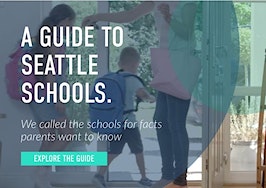