I will never forget the exciting day when I agreed to buy the rights to franchise with Coldwell Banker in France and Monaco. It changed my life and brought great personal and professional benefits.

I realized I needed Coldwell Banker because there was no way my regional French company could compete in the luxury market that has become increasingly global.

It has been seven years since that day, and I now recognize that one of the greatest results of the relationship has been that I now think like an American business person. My wife Vanda, who is a top agent, often laughs when she reminds me that I am still French.

My routine visits to the U.S. for Inman, AREAA and Coldwell Banker events have been eye-opening. I have been so lucky to learn from some of the biggest names in U.S. real estate, and I most enjoy the routine calls with major franchisees to learn how they do things.

I have learned about the American real estate aggressiveness that you call “hustle,” and I love your version of entrepreneurship that values the importance of constantly learning and networking.

European real estate is just not the same, and I wanted to share three major differences between the industries.

1. MLSs are an American thing

We, like almost all of the rest of the world, don’t have MLSs or even a true industry infrastructure.

My Coldwell Banker Mexico colleague Phillip Hendrix was successful in starting an MLS-type system in Mexico City, and I recently learned that the Japanese government is working with the Asian Real Estate Association of America (AREAA) to create one there.

The lack of structure outside of the U.S. is easily seen. Almost every listing may have multiple agents representing the home. The buyer, therefore, matters more to a European agent than the listing.

Essentially, anyone can bring a buyer. This model really hurts professionalism and the industry’s status. Real estate has not been a very prestigious business to be in.

2. There’s a lack of entrepreneurial spirit in Europe

The second major difference is the company and office structure.

European real estate has been led mostly by small operations where agents are employees who are happy with their lives.

The company is usually based in a small storefront in town. The owner and his or her three to five agents will usually bring in a combined $300,000 GCI. The owner is usually the top salesperson.

Until now, these traditional, small real estate operations have defined our industry. But things are changing with the emergence of online models and greater emphasis on franchising.

The arrival of Century 21 and other U.S. brands over the past few decades have been incredibly exciting and important to the European real estate industry.

This exposure to the U.S. model has allowed European real estate leaders to better understand and embrace new thinking including creating a more professional environment.

Larger companies now offer greater resources in marketing and training to the agents who in turn are making more money. We are attracting new people to real estate, and they are eager to join one of the franchised brands.

We lack an agent “star system.” It is cultural for the Europeans to adhere to the process, and very, very few agents even want to stand out.

U.S. top agents are taught to build their brand. This is not the case in Europe.

The agent is expected to be like all other agents. It’s almost like the old image of an IBM employee when they all wore the same suit, white shirt and tie. There is no differentiation.

Agents usually do not “sell” themselves. I see this every day when I ask sellers who they are working with. They usually respond by naming a local company, a larger French firm or a global brand.

When I follow up and ask who their agent is, their answer is usually, “she/he works in the branch up the street around the corner. Let me check if she/he gave me business card.”

Now that I have become Americanized, it is hard to accept this lack of differentiation. I am working within my firm and with others to help agents understand there is great opportunity for them.

Now that you have an understanding of how our system differs, in my next article I will explain why U.S. luxury agents have such a tough time finding and networking with agents in affluent European markets and how you can best succeed. 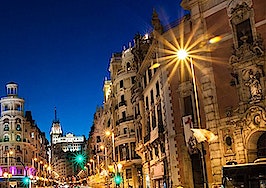 Prices surged in February amid ‘extreme shortage of homes’
Back to top
Only 3 days left to register for Inman Connect Las Vegas before prices go up! Don't miss the premier event for real estate pros.Register Now ×
Limited Time Offer: Get 1 year of Inman Select for $199SUBSCRIBE×
Inmanpot
Log in
If you created your account with Google or Facebook
Don't have an account?
Create an Account
Forgot your password?
No Problem