Fidelity National Financial has agreed to acquire Real Geeks, a customer relationship management (CRM) and marketing system for real estate agents. The acquisition marks another step by Fidelity into real estate, coming after it purchased CINC (Commissions Inc.), a business platform for real estate teams, for a reported $250 million in 2016.

The acquisition marks another step by Fidelity into real estate, coming after it purchased CINC (Commissions Inc.), a business platform for real estate teams, for a reported $250 million in 2016. Fidelity National Financial also owns stakes in a number of California brokerages and is looking to make investments in others across a number of states.

Buying Real Geeks is part of Fidelity’s plan to become the “indispensable” software provider to real estate agents, brokers and teams, said Alvaro Erize, co-CEO of CINC. Financial terms of the deal were not disclosed.

While CINC is “like a race car” that requires a team to maintain and operate, Erize said, Real Geeks is like a Tesla: It’s easier to pick up and can be used by a single agent.

“Now we can have the reach to get through Real Geeks to all agents … at all stages of their life,” Erize said.

Real Geeks has 3,100 clients and CINC has increased revenue 42 percent year over year, according to Erize, citing a Fidelity announcement and earnings call.

“We believe the combined capabilities of Real Geeks and CINC will allow us to provide valuable technology solutions to a much larger universe of our real estate customers,” Fidelity National Financial Chairman William Foley said in a statement.

Fidelity National Financial also has bought or made investments in California brokerages including Pacific Union, Gibson International and J. Rockcliff Realtors, according to The Real Deal.

In Fidelity’s fourth quarter earnings call, Foley said acquiring brokerages “is an area of focus for us,” and that the company is interested in expanding its brokerage network to states including Arizona, Colorado, California, Oregon, Washington, Texas, Illinois and Florida.

CINC has drawn on Fidelity’s resources to “double down on innovation and growth while keeping a healthy [profit] margin,” Erize said. It’s also leveraged synergies between CINC and other Fidelity companies.

For example, it’s tapped Black Knight data to improve the accuracy of the home value estimates that it uses to capture leads.

CINC bought lead-generation system TigerLeads from realtor.com owner Move in December 2016, and, Erize said, “combined the communities” of the two.

Many TigerLeads clients now use CINC’s technology, and CINC has enhanced the lead generation and conversion capabilities of TigerLeads, according to Erize.

Fidelity’s vision, he said, is to provide comprehensive technology that offers an edge to elite real estate agents and brokerages as digital marketing and the role of the agent evolves.

That will mean building a “deeper and broader” technology stack, potentially, in part, through more acquisitions.

“If we find the right fit, we will continue to expand, but it’s not that we are in a crusade to pick up companies,” he said. 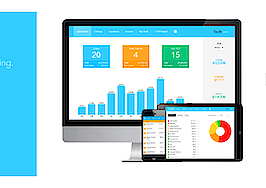 Realtyzam might be the best accountant you've ever hired